Wow, do we ever have a different take on the National Housing Strategy than what was reported in The Tyee.

After delving into the details of the so-called National Housing Strategy we can think of lots of other things to call it. Perhaps a National Gentrification Strategy. Or a National Strategy to Maintain Homelessness into the Coming Decades. Or a National Strategy to Ensure that the Private Sector Profits from Tax Money. When it comes to providing decent affordable housing for people who are on the bottom half of the income ladder, the ones who need it most, whatever you call the strategy, it is severely lacking. Here’s why:

Taking a decade to reduce only chronic homelessness by 50 per cent is cruel and will cost lives. When Prime Minister Justin Trudeau announced the housing strategy he said, “Housing rights are human rights and everyone deserves a safe and affordable place to call home ... and one person on the streets of Canada is too many.” But the strategy for dealing with this problem actually proposes to leave most homeless people on the street. It would only target “chronically” homeless people, or about 20 per cent, for housing and then, only proposes to house half of them within 10 years. Homeless people have only about half the life expectancy as other B.C. residents. Many will die waiting for housing. This is unnecessary and unacceptable.

The definition of affordable is not affordable at all. The plan defines affordable as “30 per cent of units having rents at or less than 80 per cent of median market rents, for a minimum of 20 years.” So, for example, if the median rent is $2,000 a month, 80 per cent of it would be $1,600. You need to make about $65,000 a year to afford this amount of rent. The people who need housing the most have much lower incomes. They could be left out of this housing strategy because financing homes for higher income people is so much easier. Saying that the “affordable” units only have to be affordable for 20 years is also bad for low income people who could be priced out of their homes after that period. This is a really unaffordable rate for a pretty short time.

The strategy emphasizes mixed-income developments, making it into a National Gentrification Strategy. Mixed-income is a failed experiment when imposed on low-income neighbourhoods. These developments increase property values, taxes and nearby rents resulting in gentrification and displacement. They don’t involve a mix at all: they have a rich door and a poor door, rich amenities and poor amenities. Making the announcement of the National Housing Strategy from the abhorrent Woodward’s complex — the symbol of gentrification in Vancouver’s Downtown Eastside — speaks volumes about the true intent of this strategy. Low-income neighbourhoods don’t need expensive condominiums with a few token “affordable” units; they need 100 per cent welfare/pension rate non-market housing that is community controlled. This is the only solution that will lead us out of this housing crisis.

Rent supplements are basically landlord supplements. This strategy uses rent supplements as a solution to the crisis of affordability. U.S. studies have shown that the impact is to increase rents for all low income people; those who do as well as those who don’t get the supplement. Rent Supplements are poor tactic when you have a very low vacancy rate and virtually useless rent control like we have.

Most of the funding announced in this strategy comes with lots of strings attached. $11.2 billion of the $15.9 billion promised is in loans, not investments. This makes it unlikely that non-profit groups will be able to finance housing for low income people as they will have to repay their loans and interest as well as pay for land, construction and operating costs. Private developers are eligible for loans if they meet minimum requirements, meaning they can use government money to subsidize their profits and benefit from property appreciation.

The remaining $4.7 billion is slated for “co-investment” and is contingent on being matched by another level of government. The strategy prioritizes “shelter spaces for survivors of family violence, transitional and supportive housing” as well as “community housing” (which is the new federal government term for social housing). Therefore, this is the only portion of the $40 billion budget that we consider as a potentially meaningful contribution toward building housing for low-income and vulnerable populations — if it is matched by another level of government. However, it also prioritizes “affordable housing" with its bad definition of affordable and “making homeownership more affordable.” Once again, the private sector is not excluded from benefitting from this contribution. But most importantly, this is an amount over 10 years and 13 provinces and territories. Even if the $4.7 billion was spent entirely on social housing it will not be more than a drop in a bucket. 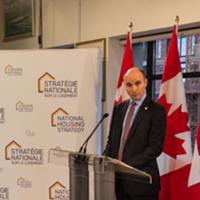 Federal Government Back with Big Dollars for Housing

Trudeau’s idea of making housing a human right does not give us any more rights. There is no mention in the government’s housing strategy, of legislating housing as a right so that people who don’t have housing can legally claim it. The only reference says, “legislation will require the federal government to maintain a National Housing Strategy and report to Parliament on housing targets and outcomes.” The mere existence of a housing strategy does not make housing a human right, neither does it house the people who need it the most. A strategy that goes only as far as reducing chronic homelessness by half in a decade, certainly does not recognize housing as a human right, nor does it give homeless people any power to claim that right.