If you were born after, say, 1980, you are too young to remember the years of dread provoked by nuclear weapons. And precisely because those years have been forgotten, you are now likely to relive them.

In 1986 the American historian Paul Boyer published By the Bomb’s Early Light: American Thought and Culture at the Dawn of the Atomic Age. He documented the instant shock the U.S. felt right from Aug. 6, 1945, as Hiroshima and its inhabitants rose into the stratosphere. The bomb robbed the war victory of its joy. Instead, people immediately imagined such bombs on rockets like the German V-2, descending on American cities.

A quarter-century of dread followed: duck-and-cover drills in schools, monthly tests of air-raid sirens on the last Friday of the month. Movies like Five, Invasion U.S.A., On the Beach and Dr. Strangelove dramatized what everyone was afraid of. During the Cuban Missile Crisis in October 1962, shoppers emptied supermarket shelves and agonized over whether to let the neighbours into the family fallout shelter. (Not many had shelters, so it was a moot point.)

The nuclear threat was so real that the U.S. Army deliberately exposed its troops to atomic bomb tests; other atmospheric tests spread fallout across the populations of Nevada and Utah, making them unwitting experimental animals. Just getting a ban on atmospheric tests was a major achievement of international diplomacy.

Some of us remember when the anti-nuclear march across the Burrard Street Bridge was a spring rite in the 1980s. Then-president Ronald Reagan’s aggressive stance toward the Soviets had revived the anxieties of the 1950s and ‘60s, and inspired not only movies like The Day After but the whole genre of post-apocalyptic novels and films.

Alongside this culture of fear were two ideas: civilians should not be targeted in war, and nuclear weapons should not be used first. The first was largely a result of Western guilt about the slaughter of German and Japanese civilians in the Second World War. The second was based on the reasonable assumption that even one tactical nuke could lead to “massive retaliation.” The doctrine of mutual assured destruction, better known as MAD, actually prevented world war for decades, with only proxy wars like Vietnam in the 1960s and Afghanistan in the 1980s.

Thinking about the unthinkable

To be sure, some Americans were prepared to contemplate nuclear war as winnable. Herman Kahn, in Thinking About the Unthinkable, gained notoriety for his cold-blooded consideration of such wars.

Now it appears that a substantial number of Americans are quite willing to support a first-use nuclear attack on Iran (and presumably on North Korea as well). With Donald Trump in office, such attacks are much more likely, and Trump could rightly claim that Americans are behind him.

This is the conclusion we can draw from a recent study by Scott D. Sagan and Benjamin A. Valentino, “Revisiting Hiroshima in Iran: What Americans Really Think about Using Nuclear Weapons and Killing Noncombatants.”

Sagan and Valentino report that an opinion poll in 1945 found 53 per cent of Americans supported destroying Hiroshima and Nagasaki, and 22 per cent thought more Japanese cities should have been bombed before Japan could surrender.

So despite the vast anxiety about nukes in postwar American media and culture, most Americans thought the Japanese had it coming: the bomb was retribution. Gradually this attitude changed as Japan became an ally and a market, and fewer Americans endorsed dropping the bombs on the Japanese.

But when Sagan and Valentino duplicated that 1945 poll, with Iran as the target, they found that 21st century Americans are just as ready as their grandparents were to use nuclear weapons on a current enemy.

Their poll offered a scenario in which Iranian attacks on a U.S. aircraft carrier result in the deaths of 2,403 American personnel — the same number killed at Pearl Harbour. The U.S. invades Iran, suffering 10,000 military fatalities before the invasion stalls. The president must then decide between two options: slog on to Tehran at a cost of 20,000 more American deaths, or drop a single nuclear bomb on Mashhad, Iran’s second-largest city — with civilian casualties ranging between 100,000 to two million. That may shock Iran’s leaders into surrender.

The study does include more choices — for example, conventional bombing of Mashhad that kills 100,000 civilians, and a diplomatic offer to keep Ayatollah Khamenei as the country’s spiritual leader without political influence, in exchange for Iranian surrender.

But Sagan and Valentino find that most Americans would be willing to sacrifice foreign civilians to save American soldiers.

That’s been a fact of American politics for a century. First World War casualty lists in the newspapers tended to depress civilian morale. In the Second World War, Gen. George S. Patton spoke for a lot of Americans when he said: “The object of war is not to die for your country but to make the other bastard die for his.”

So the 60,000 American lives lost in Vietnam meant far more than the million Vietnamese lives also lost. And while we all pay lip service to the idea of avoiding civilian casualties, they still occur — and not just as “collateral damage.”

Our friends the Saudis have not only bombed hospitals in Yemen, they’ve helped to demolish the country’s water and sewage systems. That’s led to over 800,000 cholera cases since April, over half of them in children. That’s not collateral damage; that’s strategic warfare. 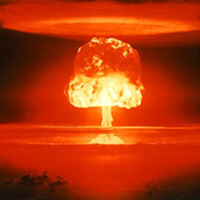 The Fool's Protection of Nuclear Arms

We might hope that the “nuclear taboo” would prevail — the longstanding principle not to be the first to use nuclear weapons in any future conflict. But as Sagan and Valentino comment, “The majority of the U.S. public has not internalized either a belief in the nuclear taboo or a strong noncombatant immunity norm.”

And that’s in the case of Iran, which has not gone out of its way to annoy the Americans recently. A war against North Korea is all the more likely to go nuclear — and could even start with an American pre-emptive attack strike, backed by a sizeable number of Americans.

According to a recent Quinnipiac Poll, 46 per cent of Republicans and 16 per cent of Democrats would support a first strike against North Korea. (Sixty-two per cent of all voters opposed the idea.) Such an attack would certainly involve few American boots on the ground, and air assaults are politically preferable.

But since North Korea has built so many underground facilities, nuclear weapons would be needed to try to decapitate Kim Jong-un’s government and military. In a recent interview, Hillary Clinton said she was afraid Trump would try just that.

When president Dwight Eisenhower was asked to authorize the use of nuclear weapons in Vietnam to save the French colonial regime in the 1950s, he refused, on the sensible grounds that the U.S. could not be seen to use atomic weapons twice in a decade against Asians.

But Trump is no Eisenhower, and a substantial number of his supporters are equally ignorant of history. He could indeed launch a nuclear war, with substantial American backing, that would rapidly involve China, Russia, Japan and South Korea as fallout spread from North Korean targets.

The consequences could easily involve enormous American casualties, both military and civilian. Almost 80,000 U.S. troops are stationed in South Korea and Japan, and 150,000 Americans live in South Korea. Many of them would become collateral damage, as would some 27,000 Canadians.

Whatever the horrific outcome, Trump could still claim that millions of Americans backed his attack. And he would be right.