We are marking three anniversaries this month, none worth celebrating. 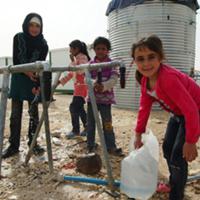 The Iraq War began on March 20, 2003; violence there has been more or less continuous ever since. The civil war in Syria passed its fifth anniversary on March 11. And Saudi intervention in the Yemeni civil war began on March 25, 2015. Like other 21st-century conflicts, these wars have been waged largely against civilians.

Ominously, they are also being waged against healthcare workers and patients. The perpetrators of these war crimes are all sides involved -- including, unfortunately, our friends the Americans and our customers the Saudi Arabians.

This in turn poses a severe political challenge for Justin Trudeau and his Liberal government. Just the other day, Trudeau said, "Regardless of how we may feel about a previous government, the fact is they were democratically elected. They signed on to a contract and we are bound to respect that contract."

But any prime minister who respects a contract with a government that commits war crimes might as well turn himself in to the International Criminal Court in The Hague for complicity in those crimes.

Ten years ago, the brand new Conservative government of Stephen Harper faced (and failed) a similar challenge when Israel went to war with Hezbollah in Lebanon. Even though a Canadian peacekeeper in a well-known, long-established United Nations post was killed by an Israeli attack, Harper's only criticism was of the UN: Why would it keep peacekeepers in a war zone, he asked innocently. With that, he positioned Canada against the UN and for Israel, come what may.

To make a point about our sudden adherence to Israel's Netanyahu government, Harper showed he meant it by shrugging off widespread accusations that a gross violation of international law had cost the life of a Canadian soldier and three other peacekeepers. What followed was renewed Canadian combat in Afghanistan and scores of Canadian soldiers' deaths -- not to mention the countless walking wounded still dealing with post-traumatic stress disorder.

Being a good global citizen

If Canada is truly back in the international community, Trudeau will have to show he means it by obeying international law like the good global citizen he seems to be. But he is dealing with the House of Saud, the richest and best-armed 14th-century kingdom the world has ever seen, and he is now seen as the heir to the liberal throne soon to be vacated by U.S. President Barack Obama.

Both Obama's and King Salman's governments have committed well-documented violations of international law, just like Bashar al-Assad and Vladimir Putin. Those violations were quite as criminal as the Japanese bayoneting of Canadian and other patients in a Hong Kong hospital on Christmas Day 1941.

The NGO Physicians for Human Rights has shown just how much blame there is to go around in Syria:

These and other attacks killed 705 healthcare workers between March 2011 and Dec. 2015. The vast majority were committed by the Syrian government or the Russians. "Five percent of the killings were caused by shelling and bombing, 25 percent by shooting, 14 percent by torture, nine percent by execution."

Physicians for Human Rights points out, "The majority of attacks on medical facilities were targeted attacks, meaning that these locations were deliberately chosen for destruction, in violation of IHL [international humanitarian law]."

And on Feb. 15, Foreign Affairs Minister Stephane Dion responded to the bombing of a hospital in Syria supported by Medecins Sans Frontieres (MSF): "Canada strongly condemns the continued targeting of health facilities and personnel in the Syrian conflict. Again, we call on all parties to the conflict to respect international humanitarian law and provide humanitarian workers with safe, full and unhindered access to those in need in Syria."

Launching a war of choice

Well, that was the wicked al-Ashad government and its wicked ally Putin. But our old friends the Saudis, to whom we are happy to sell armoured personnel carriers, last year launched a war of choice against their neighbour Yemen, the poorest country in the Arabian peninsula. Leading a coalition of Gulf states armed with superb American weaponry, the Saudis have created a year-long nightmare for Yemen's civilians.

A naval blockade has closed off Yemeni ports to food and medical shipments for months. The Saudi coalition has complete air superiority and has attacked hospital facilities. As MSF put it in a report in early March:

"On 10 January 2016, the MSF-supported Shiara hospital in Razeh, Saada Province, near the border with Saudi Arabia, was hit by a projectile, killing six and injuring seven. This follows two other such incidents against MSF health facilities in Yemen: one in Haydan, Saada province on 26 October 2015, and another on an MSF tented clinic in Houban, Taiz governorate, on 2 December 2015. MSF has called for an independent investigation into the Razeh incident by the International Humanitarian Fact-Finding Commission."

'Patients burned in their beds'

And it's not just the Saudis bombing hospitals. In November 2015, MSF released an internal review of an attack on its hospital in northern Afghanistan:

"Hospitals have protected status under the rules of war. And yet in the early hours of 3 October, the MSF hospital in Kunduz came under relentless and brutal aerial attack by U.S. forces.

"Patients burned in their beds, medical staff were decapitated and lost limbs, and others were shot by the circling AC-130 gunship while fleeing the burning building. At least 30 MSF staff and patients were killed."

That number later rose to 42. The U.S. tried to shrug it off as an accident, but its forces had been repeatedly advised of the hospital GPS coordinates, and the attacks were directly and effectively aimed at the hospital and nowhere else. A dozen Americans involved in the attacks have just been punished by measures like letters of reprimand that may end their hopes of further promotion.

The American media response to the Saudi war on Yemen has been muted, and the attack on Kunduz got only perfunctory coverage in the New York Times. While Stephane Dion was quick to attack Syrian raids on hospitals, a search for "Kunduz" on the Government of Canada website turned up nothing in the past year.

But Canadian doctor Joanne Liu, the president of MSF International, condemned the American attack on the same grounds that Dion had: "Nothing," she said in a statement, "can excuse violence against patients, medical workers and health facilities. Under International Humanitarian Law, hospitals in conflict zones are protected spaces. Until proved otherwise, the event of last Saturday amount to an inexcusable violation of this law. We are working on the presumption of a war crime."

Since Article 14 of the Fourth Geneva Convention explicitly names hospitals as protected zones, Kunduz was indeed a war crime -- committed by our good friends and top trading partners, the Americans.

But complicity, if not outright guilt, can fairly be charged against a government that fails to criticize war crimes committed by its allies and trading partners -- whether in Lebanon in 2006 or Afghanistan in 2015 or Yemen in 2016. Being a selective critic only makes that government a hypocrite as well as a partner in its friends' crimes.

In the election campaign, Trudeau adopted an intelligent, harm-reduction policy when he chose training and humanitarian aid over yet more bombing. But he loses the moral high ground when he lets his friends go on bombing civilians just like Bashar al-Assad.

Trudeau could regain a little moral traction if more Canadians like Dr. Joanne Liu attacked his government's hypocrisy. Then he could at least go to his allies and complain about the political trouble they'd dragged him into, which obliged him to cancel the weapons carriers and perhaps be a little less obliging to the Americans.

It's up to ordinary Canadians to twist their prime minister's arm until he stands up a little straighter.