When you follow disease outbreaks in obscure parts of the world, you soon notice the outbreaks that don’t get much attention. We all recall SARS and swine flu and Ebola and Zika — mostly because they made some North Americans sick. But when people get sick in a country of no strategic interest, we yawn and look for better clickbait.

This is especially true when it’s a messy disease like cholera. We paid a little attention to it in Haiti back in 2010-2011, because so many were dying just after UN peacekeepers introduced it. Now it continues at a lower rate, and no one cares that over 800,000 Haitians have contracted cholera since then, and over 9,500 of them have died.

Similarly, no one seems to care that cholera has been raging in Yemen since April — as a direct result of a war launched by Saudi Arabia and its friends.

Cholera is a bacterial disease that spreads in food or water contaminated by the feces of its victims. Without a semblance of a system for safe water and sewage, Haiti was as much a sitting duck for cholera as London had been in the 1850s.

In 2016 the World Health Organization reported 172,454 worldwide cholera cases the previous year. That was a sharp drop from 2014. Significantly, Yemen was not listed among countries dealing with cholera. It’s the poorest of the Arab nations, but it wasn’t that poor.

It was, however, in a civil conflict. In 2015, the conflict turned into a proxy war between Yemen’s northern neighbour Saudi Arabia (siding with the ousted government) and the Saudis’ enemy Iran (siding with the rebel Houthis). Neither side can fairly be called the good guys. But we are aligned with some of the bad guys, and that puts us in a very bad space.

The proxy war is a career move by Mohammed bin Salman, the 31-year-old son of the present 81-year-old Saudi king. His ascent has been rapid, culminating in June when he became crown prince. Before that he had been appointed defence minister for the kingdom. In that capacity he organized a coalition of Gulf States to intervene in Yemen via air strikes and a naval blockade. The intervention began in March 2015 — with notable silence from Saudi Arabia’s American, Canadian and European allies.

A grinding war of attrition

If the crown prince had won a quick victory over the Houthis, he would now be covered in glory. Instead, the Yemen war has been a grinding, brutal war of attrition — especially against Yemen’s infrastructure.

The Saudi coalition has prevented most medical supplies from getting into the country, while Saudi coalition jets systematically bombard civilian areas. As Médecins Sans Frontières said in a July update on its activities, “Hundreds of health facilities across the country have stopped functioning due to airstrikes and shelling, and a lack of supplies, funding and staff.”

The Saudis have clearly been emulating the strategy of other combatants in the Middle East who attack health-care facilities. This has become so widespread that the World Health Organization has actually had to organize a campaign, #NotATarget, to try to protect health-care workers in combat zones.

This is a late and feeble response to Syrian, Saudi and American attacks on hospitals from Aleppo to Afghanistan to Yemen. They are ipso facto war crimes under Article 14 of the Fourth Geneva Convention. Since the UN Security Council is dominated by permanent-member governments that have violated Article 14, we can’t do much about it.

The Saudi coalition has also attacked Yemen’s water infrastructure, which is now in ruins. After a cholera outbreak in late 2016, the problem seemed under control until late April when a new outbreak swept the country.

Though cholera is an easily curable disease, in poor countries and those under naval blockade it can be deadly. To their credit, the Yemenis have kept their fatality rate down to fewer than one in 100 cases.

But since April 27, more than half a million Yemenis have been sickened by cholera. In June, children were falling ill with it at the rate of one every 35 seconds. While the peak of the outbreak seems to have passed, close to 5,000 people a day are still contracting the disease.

According to WHO’s Aug. 22 epidemiological update, 23 per cent of cholera cases are in children under the age of five, and 53 per cent are in children under 18. Early in August, Save the Children warned that a million malnourished children are trapped in cholera hot zones. Their immune systems are weakened, and cholera and other diarrheic diseases aggravate their malnutrition.

While non-governmental organizations like Save the Children and MSF are doing what they can, the UN is reduced to wringing its collective hands and calling it a “deplorable, man-made catastrophe.”

And Canada? We’re throwing $7.7 million into the begging bowls of a few NGOs to provide a little more food and sanitation for Yemen. Not a peep about why the Yemenis might need it, but lots of warnings about travelling there.

Ottawa might reflect on a recent article in the Lancet Global Health, whose authors wrote: “Both sides have been accused of disregarding the well-being of civilians and breaching international humanitarian law. However, the government is supported by a Saudi-led coalition and this alliance commands far greater resources than the rebels. As a result, Houthi-controlled areas have been disproportionately affected by the conflict, which has created conditions conducive to the spread of cholera. 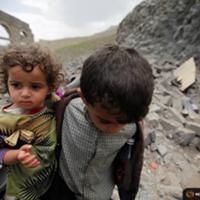 Yemen’s War: A Test for Canada, and We’re Flunking

“Saudi-led airstrikes have destroyed vital infrastructure, including hospitals and public water systems, hit civilian areas and displaced people into crowded and insanitary conditions. A Saudi-enforced blockade of imports has caused shortages of, among other things, food, medical supplies, fuel and chlorine, and restricted humanitarian access.

“As the Saudi-led coalition has played a key role in the collapse of health, water and sanitation systems in rebel-controlled areas, it is bizarre that UNICEF recently published a press release welcoming Saudi Arabian ‘generosity’ after the Kingdom donated US$67 million to the cholera response in Yemen.”

More concisely, a 31-year-old Saudi prince is waging biological warfare against his neighbours, and we aren’t even complaining. The WHO is in no position to name and shame the House of Saud, whose wealth gives the Saudis political clout with UN members that need its oil; WHO can only thank the Saudis for tossing some spare change at a problem they themselves created.

It’s extremely difficult to conduct foreign policy on strictly moral terms. This is especially true when one is already compromised, as Canada is in this case thanks to our providing armoured personnel carriers to the Saudis. For the sake of some Ontario votes, Trudeau’s Liberals have tolerated not only the suppression of Saudi citizens with those armoured vehicles, but the starvation and sickening of hundreds of thousands of Yemeni children and adults.

Even the crown prince is losing heart in his ill-advised war. The news source Middle East Eye recently reported that Prince Mohammed has told the U.S. he “wants out” of his war, even at the cost of the Americans negotiating with Iran.

Under the present U.S. administration that seems unlikely. So roughly 5,000 Yemenis, most of them children, will contract cholera every day just to protect the egos in the White House and the House of Saud.

And Canada will tolerate the infliction of cholera as policy — for the foreseeable future.