During its first weeks in office, John Horgan’s government will face myriad urgent issues requiring decisions. Some will involve the normal administrative decisions required to keep the mechanism functioning, while others have the potential to shape the fiscal legacy of this government for years to come.

The current public debate about the Site C dam project is a case in point. The key questions are what will be the ultimate cost, and what will be the impact on the BC Hydro’s monthly customer bills?

The NDP promise of an independent financial review of the project has sparked a public debate about this costly project. As Harry Swain, one of the critics of the Site C project, points out this a healthy development.

The NDP also promised in-depth reviews of the deteriorating finances of two key Crown corporations, BC Hydro and the Insurance Corporation of British Columbia (ICBC). MLA Carole James, rumoured to be the NDP’s finance minister, recently stated that one of her top concerns is the state of the finances of both Crown corporations.

The government should launch the financial reviews as soon as possible, as it will take some time to untangle the complex accounting practices that the BC Liberals have forced on both corporations. The results of such reviews will likely force the new government to make controversial decisions respecting the operation of these two vital corporations.

The financial reviews will document how the Liberal government’s reputation as sound and prudent financial managers was undeserved.

While claiming that it was keeping electricity and auto insurance rates affordable, in the last five years the government actually transferred millions of dollars from both Crowns to reduce the direct taxpayer-supported debt.

From 2012 to 2017, some $1.2 billion in dividends were extracted from BC Hydro, and approximately $500 million was appropriated from ICBC as “excess” capital.

At the same time, the government subsidized the price of electricity and the compulsory auto insurance by forcing BC Hydro to increase its debt and destroying ICBC’s once healthy capital reserves.

The deliberate degradation of the financial health of BC Hydro and ICBC could have been prevented by the “independent” BC Utilities Commission, which must approve the annual budget and rates of the two public monopolies.

This potential check on the government’s plan was eliminated in 2012, when the government sidelined the utilities commission and took direct control of rate setting at BC Hydro. The following year, the government ordered the commission to limit the rate increases for mandatory basic auto insurance, at a time when claims costs began to rapidly escalate.

These “rate smoothing” actions helped re-elect the Liberals in 2013, and kept the worsening finances of the two Crowns from becoming a major issue during the recent campaign. 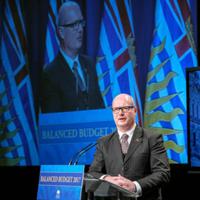 The worsening financial condition of BC Hydro and ICBC should not come as a surprise to the new NDP government or the public. In January, Moody’s Investor Services, one of the major bond rating agencies, warned that BC Hydro’s growing debt threatened the province’s high credit rating.

And late last November, ICBC disclosed that it would require the equivalent of a cumulative 117 per cent increase in basic insurance revenue to keep its capital reserves from falling below the government’s regulatory minimum levels. The ICBC forecast caused a great deal of public concern.

The government responded by announcing a review of the basic insurance finances, and ordering the BC Utilities Commission to approve an inadequate 4.9 per cent increase.

When the corporations’ three-year service plans were released in February, they provided further warning that the government’s manipulation of the books of BC Hydro and ICBC was unsustainable.

Tough decisions for the NDP

The Liberal policy of keeping electricity and auto insurance rates artificially low benefits today’s customers at the expense of future consumers, who must pay down the debt at BC Hydro and rebuild ICBC’s capital reserves. The policy has its defenders, like the Association of Major Power Consumers which recently warned that without the subsidized electricity rates there was a danger of plant closures.

Others are less comfortable with the Liberals’ manipulation of the books of BC Hydro and ICBC. The union MoveUP, which represents BC Hydro workers, said the corporation’s financial plan was “ill conceived and served only to push costs of service into future years for purposes of political expediency. Far beyond imprudent, it borders on reckless…”

The public needs to be informed about the true state of the finances at our two public utilities. This will allow the healthy dialogue about the future, like the debate Swain is helping to promote on Site C.

The new government inherited the looming financial crisis. How Horgan and his colleagues (including the Green party allies) handle the challenge of restoring BC Hydro and ICBC to a healthy financial condition will set the tone for how well the NDP handles the public’s finances for the coming years.

It will be a difficult and potentially fractious process, as the desires of special interests are balanced with the public interest. But the deceptive practice of the previous government must be exposed, and the difficult policy choices previously deferred must finally be confronted.