So Trump has dumped the Paris Climate Agreement, misunderstanding the way it works and insisting that America must come first. In response, Tesla’s Elon Musk has dumped Trump, resigning from his advisory councils, and French President Emmanuel Macron has trolled Trump to “make our planet great again.”

Meanwhile, Vancouver, Victoria and Saanich have all made serious commitments to transition to 100 per cent renewable energy for all purposes by or before 2050, and in British Columbia we may soon have an ultra-slim-majority NDP government supported by the Greens that’s strongly committed to climate action and building a new green economy.

In many people’s minds the dance between cynicism and hope, pessimism and optimism, is back in play. In my mind there’s only one game, between determination and defeat. So far, determination has a 100 per cent winning record.

I have spent 20 years in the climate trenches, and had success by focusing on a positive vision of the future in which our civilization moves beyond fossil fuels. A dose of reality is needed, however, to put the vision in perspective.

In Vancouver, the reality is sea-level rise. A team of international scientists recently reported that if the world’s carbon emissions continue unabated we could be looking at a three metre sea-level rise by the end of the century, either requiring a four-metres-high sea wall along 100 kilometres of waterfront, or inundating most of Richmond, Delta and chunks of Surrey. (To see the reality, go to floodmap.net or flood.firetree.net.

And here’s where reality becomes uncomfortable. We are currently on track for a 3 to 4 C increase in temperature by the end of the century. Geologically, the last time the world was 3 C warmer, the sea level was 25 metres higher. If we fail to prevent global emissions from continuing to rise, an eventual 25-metre rise will become locked in.

Our elderly grandchildren will look at the future and know for certain that it is no longer possible to prevent Greenland and Antarctica from melting, that downtown Vancouver will eventually become an island, and that most of Richmond, Delta, Tsawwassen and Surrey will be under the sea, along with the airport, the road to Seattle, and Vancouver’s entire marine trade infrastructure. Vancouver’s future economy will collapse. On Vancouver Island, most of Duncan will be lost.

So with 41 per cent of climate scientists choosing “severe to catastrophic” for their estimate of the likely effects of global climate change over the next 50 to 100 years, what does “determined” look like when it comes to solutions?

It’s not about electricity: our power in B.C. is already 98 per cent renewable, and if Site C is stopped B.C. has plenty of affordable wind energy to power electric vehicles. The solar revolution will continue, but for effective climate action it’s mostly about transportation, buildings, meat and wastes, with a moratorium on all new fossil fuel projects. 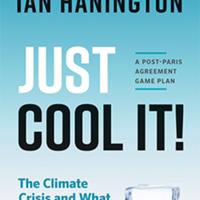 ‘Just Cool It’: Seeking Hope in an Age of Climate Crisis

The Dutch understand what sea-level rise means. A third of the country is already below sea level, and a 25-metre rise would inundate almost the entire country. Maybe that’s motivating them to get serious, with a proposed ban on the sale of non-electric cars by 2025.

Strong climate action in B.C. means setting a province-wide target for 100 per cent renewable energy before 2050. It means developing a really engaging public education program. It means persisting in investments in safe separated bike lanes. It means supporting TransLink and BC Transit in powering all new buses with electricity instead of diesel or natural gas. It means persuading TransLink to invest in an electric ferry for the next Seabus replacement, and BC Ferries to plan electric car ferries on the shorter routes, as Norway has done.

To encourage faster electric vehicle uptake it means learning from Norway, where 50 per cent of all new vehicles purchased are electric, and allowing free charging, free road tolls, free parking and free use of bus lanes and ferries in addition to the $5,000 incentive and use of HOV lanes. By 2020 to 2025, new electric vehicles with a 400-kilometre range will cost the same as conventional vehicles. The impact on the oil industry will be significant, and costly for those who fail to disinvest in time.

As to long-distance trucking, flying and shipping — they can come later, as battery and hydrogen technologies improve.

For buildings and retrofits it means learning from Brussels, Belgium, which since 2015 has required all new buildings and retrofits, large or small, to be Passive House design with a zero carbon footprint. B.C.’s current goal is zero net energy ready by 2032 — a classic case of policy laziness, pushing it off to the next generation. Four years notice is all that’s needed to train the carpenters.

Globally, since animal agriculture is causing a significant part of the climate crisis, it means eating far less meat. And it means speeding the path to a fully green “circular economy,” with zero waste.

But above all it means making a strong, visionary commitment to building that new economy. We need to make the jump to a clean, green civilization with plenty of meaningful jobs, and no more air pollution. Trump may not get it, but most British Columbians do.