“You know, Laurie, you could have lobbied for the inscription of maybe just the Gulf Islands National Park Reserve and this whole initiative could have been a whole lot easier.”

“I know,” Laurie Gourlay replies with a smirk, “but I do enjoy a challenge.”

And a mighty challenge it is. Far beyond the boundaries of the existing park reserve, a new proposed World Heritage Site in British Columbia — stretching from the U.S. border to Desolation Sound — would knot together industrial harbours and fishing outposts, 37 First Nations’ traditional land and swanky beach resorts, and a massive marine and terrestrial meshwork of species, ecosystems, communities and interest groups.

“Put it this way: would you deny it has outstanding universal value?” Gourlay asks us in a self-assured tone. April and I glance at each other, wordlessly.

It’s late in the evening, and the moist springtime breeze wafting inland from the Caribbean Sea has begun to cool the dry tropical air. Two small geckos hanging upside down on the ceiling of our rental cabana’s front porch click and chirp at each other while my email fails to load one more time. April and I have spent a long day interviewing conservation managers, tourist operators and fishers, all united in their fight against the looming threat of offshore oil exploration in the area.

UNESCO — the United Nations Educational Scientific and Cultural Organization — has sided with them in condemning the Belizean government’s short-sighted plan to smear the world’s second longest barrier reef. Their World Heritage Site was added to the list of endangered sites eight years ago and, supported by international pressure, average Belizeans haven’t abated their fight to save their sea ever since.

Then the Internet suddenly awakens. “You won’t believe what’s happening back home,” April beams. The Salish Sea Trust, a loose coalition of volunteers led by Vancouver Island-based Laurie Gourlay, has initiated an application to have the Salish Sea considered for UNESCO’s World Heritage list. As the geckos continue to click at each other, April and I fight the slow Wi-Fi connection to click our way through the Salish Sea website.

“Whereas the Salish Sea is an ecologically, economically and culturally rich area which provides critical marine habitat, biodiversity and essential ecosystems that are of as much importance to nature as to the peoples, regions and nations which reside alongside this unique ocean environment,” reads the resolution for a Salish Sea World Heritage Site, “[...] Therefore be it resolved that we support the application for the Salish Sea to be considered by UNESCO as a World Heritage Site as 2017 begins; and urge immediate action from local, provincial and federal governments in furtherance of this initiative and in partnership with all First Nations and interests.”

Instantly, we feel the urge to send a message to the Salish Sea Trust. We explain that our current job is to travel to all 10 of Canada’s UNESCO World Heritage Natural Sites, as well to 14 international sites around the globe, to learn about the cultural and social dimensions of natural heritage. Heritage protection, we reflect in our message, is the result of negotiation, compromise, often even struggle and conflict.

We underline that “nature” is deeply entangled with “culture” — despite UNESCO’s neat attempt to, until recently, historically divide the two into separate categories of heritage — and when you begin to scratch the surfaces of spaces like the sea, you soon uncover profound layers of human history, economics, politics and ways of life.

Heritage, we are learning through our research, isn’t always what it seems. Around the world an entire industry has emerged to create, manage and benefit from the making of Heritage. Far from being a transparent record of our shared memory, Heritage (the one with a capital H) can perhaps be best understood by translating it into French: patrimoine — patrimony, capital. Often an inscription on UNESCO’s World Heritage list is sought by regional and national governments merely as a way of promoting international tourism. (China, with its deep list of 50 sites, is masterful at this.)

Gourlay’s reply lands in our inboxes within minutes: “Let’s meet in Cedar [the community south of Nanaimo where he lives] when you get back. I’ll tell you all about what we’re doing.”

Canada has 18 sites on UNESCO’s World Heritage List. Ten are “natural” and eight are “cultural.” All in all there are 1,052 sites on the worldwide list: 814 cultural, 203 natural, and 35 are mixed — a new category that attempts to recognize unique cultural landscapes that are born as a result of the interaction of humans within their ecosystems. The World Heritage Committee recognizes sites for their “outstanding universal value” after nominations initiated by governments. Recognition does not mean legislation or rule-enforcement. Typically there is little or no funding attached, either. Being on the list simply means that a place is special, unique and valuable not just to locals but to all of humanity.

Not much of British Columbia is so universally special, apparently. SGang Gwaay in Haida Gwaii, Yoho National Park (together with six Albertan sites part of the Canadian Rocky Mountain Parks) and Tatshenshini-Alsek Provincial Park in the northeast corner of our province (a park which, assembled together with the Yukon’s Kluane National Park and Alaska’s Wrangell-St. Elias/Glacier Bay Park comprises the world’s largest World Heritage Site) are the only “properties” in a list teeming with Albertan and Eastern Canadian sites. The Salish Sea, if added to the tentative list of nominations by Canada and eventually inscribed by UNESCO, would be the largest in our province.

Most importantly, the Salish Sea would also be Canada’s first mixed site. Mixed sites, the rarest World Heritage Sites, are recognized by UNESCO for satisfying both cultural and natural criteria. But a mixed site is more than a sum of different qualities. Understood as “cultural landscapes,” mixed sites recognize that natural and cultural heritage is the outcome of a meaningful process of interaction and mutual shaping between humans and their environments.

Only 35 such cultural landscape sites around the world honour traditional Indigenous knowledge, recognize the importance of land, air and sea for cultural evolution and social organization, and underscore the idea that the environment is not a “wild” or “pristine” space from which people should be excluded, but rather a territory that people themselves have shaped in light of their unique ways of life: a home.

A long way away

UNESCO inscription is a long, long way away. The first step is acceptance on Canada’s tentative list; only after would an actual World Heritage application get underway.

Despite numerous hurdles, such as the need to secure more support, Gourlay is cautiously optimistic it might have a chance. “Why not?” he argues optimistically, “this would recognize First Nations’ heritage beyond Canada’s 150th birthday, the richness of our seas’ biodiversity, and the interdependence we on the coast have with our sea. Who could be against it?”

April and I have visited enough UNESCO World Heritage Natural Sites to understand that coming to terms with the inextricable relations between people, non-human animals and their environment is often the best way to recognize our common interspecies heritage and to protect our shared ecosystems, and we do not keep this lesson from Gourlay. He nods in agreement. 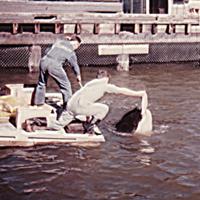 ‘The Killer Whale Who Changed the World’

This heritage initiative, he explains, is not a way of making money. It’s not about patrimony. And it’s also not about barring entrance to the sea to build a conservation fortress. “It’s about recognition. It’s about getting people to realize how special this place is,” he says.

But of course, it’s about negotiation too. Heritage is the outcome of a process known as heritagization: a complex system of accords, deal-making, boundary drawing, rule-creation, and alliance-formation by which heritage comes to life. Traditional inhabitants, environmental organizations, municipalities, business interests, politicians and citizens at large all play a role. It is tempting to think that cultural and natural heritage are simply what we remember of our past, what we value about our present, and what we want to pass on to future generations, but in actuality heritage-making is a lot more like politics and diplomacy. It takes time and patience, “but this is our chance,” he argues, “today is the day.”

As April 18 — the worldwide day of cultural heritage proclaimed by the International Council of Monuments and Sites — comes and passes, the volunteers at the Salish Sea Trust know very well that to identify the Salish Sea as valuable would remind all British Columbians of the interdependence of our lives with our waters, and to unite them on a shared vision of the sea as commons.