On Sunday night, a man walked into the Centre Culturel Islamique de Québec mosque in Quebec City and opened fire during evening prayers. Minutes before, 50 Canadians had knelt together in devotion with families, friends, neighbours, and loved ones. Minutes later, 17 of them were injured, five critically. Six are gone forever.

Police have arrested Alexandre Bissonnette, a 27-year-old student, charging him with six counts of murder and five of attempted murder. By noon Monday, some media were reporting he had recently adopted xenophobic and anti-refugee views. Reuters reported that a U.S. government source said security experts in that country were leaning to the view that the attack was motivated by a hatred of Muslims.

Investigations can and must take time. Right now we don’t know for certain what motivated the shootings. But we do know that racism, sexism, xenophobia and hate are alive in our land.

Canada may not “do” mass shootings, but we are no strangers to racial and religious hate. Intolerance is woven into the fabric of our nation. We built our cities on the bodies of French, English, American and Indigenous people. We burned the White House. We hung Louis Riel. We spent generations disenfranchising and marginalizing Aboriginal Canadians on reserves and in residential schools. We imprisoned thousands of innocent Japanese-Canadians in internment camps and blamed the fog of war. We have, at times, resisted the right of women to vote, and for gay couples to marry.

More recently, we have seen politicians pushing policies that many decried as hostile to Muslims. In 2013, Pauline Marois, then premier of Quebec, was trying to push through a charter of values that would ‘unite’ the province by erasing the cultural identity of middle-eastern Quebecers, among others.

Canadians decisively tossed all them out of office. But the anger and resentment they rode to power didn’t disappear.

While we cluck our tongues at the United States for electing a sexist, racist ideologue as their Commander in Chief, we can’t ignore those spreading hatred here. They are papering Richmond and Lower Mainland communities with KKK flyers and New Westminster with Nazi propaganda. They are the ones who left a pig’s head on the doorstep of the Centre Culturel Islamique de Québec mosque during Ramadan last year.

Politicians like Kenney and Leitch are back riding populist waves of resentment, fear and anger in the hopes of landing right in the halls of power once more. Against all sense, they might end up there.

We cannot wait around and watch that happen. Not this time.

On a weekend when tens of thousands of Americans filled airports to protest Trump’s undemocratic and illegal ban on Muslims, Canadians can and must do more than be shocked and sad and surprised when a racist, terrorist act happens within our borders.

It is our responsibility as Canadians to speak up, to outnumber, to out-organize and outvote and out-everything so those who sow hate and spread discord are forced back into fringes and shadows where they belong.

If your thoughts and prayers are with the victims, your money and your time should be, too. Get involved in anti-discrimination efforts in your community. Call out racism and intolerance when you see it happen — especially when it comes from someone you love. Make it meaningful. Let it be awkward.

If you’re going to a vigil to grieve and stand in community, consider organizing outside your usual social sphere to counter those sowing racial or religious hatred. Turn your sadness into resistance. Fight back with your voice, with your feet and with your powerful, ballot-casting hands. 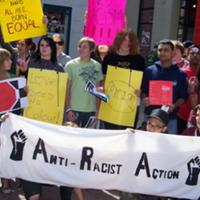 How Are White People Confronting Racism in Canada?

If you have the ability to make programming or editorial decisions in the media, please stop legitimizing racist hate.

Every moment of airtime that demagogues like Ezra Levant and Leitch to promote intolerance without facing counter arguments gives them credibility they have not earned. Fact check in real time. Treat them like the carnival sideshow they are. Or better yet, stop giving them airtime at all. Remember that without billions in free airtime, there’d be no President Trump.

And if (by chance) you’re the prime minister of Canada, wondering what to do after your solidarity tweet broke the Internet, you can lift the Safe Third Country Agreement and allow refugees to arrive from Trump’s America. As prime minister, you can put legal force behind your words and numbers behind your commitments. You can give refugees hope, and remind the people who voted for you why they did so. I guarantee it will do more for your approval ratings than a listening tour ever could.