It’s a late afternoon in August, and I’m swimming in Victoria’s Gorge Waterway. The sun is reflecting from downtown buildings barely 1.5 kilometres away. Pines and arbutus trees hang over the shore, a few kayakers head up the channel and about a dozen people are swimming or laying on the small public dock in Bamfield Park.

And floating in the cool, slightly salty water, I’m thinking about what a difference one determined person can make.

Even two decades ago, I wouldn’t have thought of swimming in The Gorge, abandoned to pollution and a dumping ground for unwanted tires and shopping carts, surrounded by commercial and residential development.

It has always been pretty. But for decades, it was no place for a swim. The salmon runs, eelgrass and oyster beds were gone or terribly damaged.

It wasn’t always like that. First Nations fished for herring and salmon and used The Gorge as a meeting place for millennia. A midden under the Tillicum Bridge, where the Gorge Narrows rapids reverse direction with the tides, is 4,000 years old.

And from the late 1800s to the 1920s, The Gorge was central to life in the growing capital.

Victorians travelled in boats and by wagon or streetcar to the Gorge Narrows to picnic, swim or attend outdoor concerts. In 1911, according to Dennis Minaker’s excellent book The Gorge of Summers Gone, the British Columbia Railway Company built an early theme park at the Narrows to encourage more people to use its streetcar line. There was a roller coaster and an attraction that plunged terrified customers down a steep ramp into the water in small boats. Swimming races attracted enthusiastic crowds.

The local athletic association built a rival recreation camp at Curtis Point about 500 metres east of the narrows. There was a campground and tea room and swimming area, shown in this old film . A 34-metre diving tower was used for exhibitions until 1922, when a 19-year-old diver – Billy Muir – was paralyzed in a dive gone wrong. He never really recovered and died three years later.

Around the same time, The Gorge started dying. Victoria was growing and forests and fields around the waterway and Portage Inlet were replaced with houses and roads, sending stormwater and sewage into the waterway. Industries in Victoria’s harbour sent all kinds of waste into the water, and The Gorge became a dumping ground for unwanted items large and small. The once-abundant eelgrass beds and herring and salmon struggled in the polluted waters. 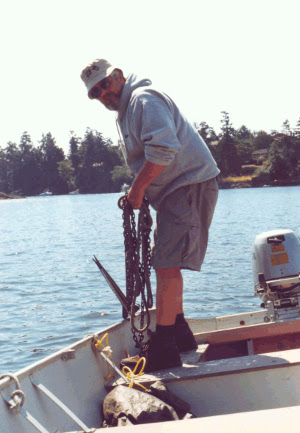 John Roe at work on The Gorge.

And along came John Roe. I think I read about him around 1994, not long after I moved to Victoria. Roe and his 10-year-old son, in a small rowboat, had decided they would start to clean up The Gorge. They spend weekend days hauling tires and shopping carts from the water and clearing the shoreline.

It seemed noble, but futile. And I wondered if a 10-year-old boy really wanted to spend weekends hauling stuff from murky waters.

And then Roe took the next step, and moved beyond the quirky individual effort. In 1996, he and a core group of volunteers created the Veins of Life Watershed Society as a nonprofit dedicated to protecting and improving The Gorge and other local watersheds. The society found some donated office space and tracked down grants to support the work.

One $300,000 project, for example, tackled the cleanup of Cecilia Creek. It was by then more storm sewer than creek, channeled through underground pipes and massively contaminated with everything from fecal coliform to heavy metals. The grant let the society and its partners clean up the creek and work with communities and businesses on reducing the sources of contamination.

And Roe set a goal. By 2000, The Gorge would host a major swimming race for the first time in 65 years, he vowed. And it did. 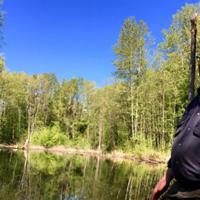 And The Gorge recovered. We lived a few blocks away for a time, and kayaked there. The bright green eel grass beds waved with the sweep of the tides, sometimes dotted with herring roe. People lined the Admiral Road bridge, keen on the herring run. Spawning salmon swam up the waterway and returned to Craigflower and Colquitz Creeks, which feed Portage Inlet. Seals hunted the salmon, herons waded the shallows and eagles and kingfishers perched in the trees. Life returned.

There were steps to improve water quality in The Gorge before John Roe started his cleanup effort, of course. Municipalities were making some efforts to reduce runoff and sewage. Saanich had been planning a park along its part of The Gorge since the mid-1960s.

But the efforts were slow, and splintered. (The Gorge, in six kilometres, is bordered by four different municipalities.)

And no one was imagining a Gorge where people would be swimming in clean water.

Roe, hauling scrap metal out of the water in his little boat, suggested that was exactly what we should be imagining.

People united around the idea, and organized and lobbied and worked.

Now, on a warm evening, I can head to The Gorge for a swim. I don’t worry about pollution or whether a recent rain has swept sewage into the waterway. The biggest concern is whether the tide is coming in, bringing colder water from the ocean.

And every time I slip into the water, I think about John Roe and the difference one person can make.