For those who still believe the American people could never elect President Donald Trump, I have a two-word rebuttal: Rob Ford.

The late Mr. Ford, former mayor of Toronto, became arguably the most recognizable Canadian name in history due to his racist commentary, drunk driving, and of course, smoking crack with gangsters.

Toronto is the largest and most ethnically diverse city in a comparatively liberal country, yet Ford succeeded in winning a landslide election in 2010, ripping up the politically-correct playbook in much the same way as Trump has outrageously done. And while the intelligentsia may decry the public sins of Trump, at least he was never charged with domestic assault (the charges were withdrawn) or accused of orchestrating a jailhouse beating, or as far as I know, smoking crack.

The success of Trump and Ford are similar in that they rely on an ongoing media circus, incomparable name recognition and an alienated electorate. Both tout business expertise over political experience — Ford was no billionaire but publically played on his part ownership of the family label business. And both politicians enable their supporters by making it respectable to indulge in our ugliest instincts. 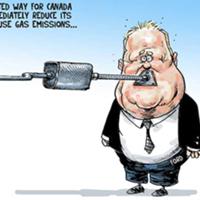 While often couched in outraged commentary, the media obviously crave characters like Rob Ford and Donald Trump, the latter has benefited from some $3 billion in free airtime. Likewise, Ford’s antics were on nightly rotation on late night U.S. comedy shows. Jimmy Kimmel even flew Ford down to his L.A. studio for what most would view as an on-air humiliation. Rob Ford and many in “Ford Nation” saw it instead as both amusing and validating.

Had Ford not become ill with cancer (he passed away this year), he might well have been re-elected in 2014. His far less charming brother Doug Ford ran for mayor at the last minute in his stead and came in a respectable second. Well-respected progressive councillor Olivia Chow was expected to walk away with the election by many disgusted by Ford. She came in a distant third.

Canadians enjoy a certain comparative smugness about America’s obvious social and racial divides, but the disturbing case of former mayor Rob Ford is a cautionary tale for both sides of the border. Well-read urban elites delighted in sharing social media posts mocking Ford but completely misjudged the groundswell of suburban anger towards the political ruling class.

In fact, every contemptuous reaction toward Ford’s many contempt-worthy deeds only seemed to further activate his suburban base. The genius of Ford seemed to reside in his ability to land on the front page almost every day whilst surviving serial scandals that would have fatally wounded almost every other politician with a higher moral bar. Sound familiar?

Beyond smoking crack, it became publically known the mayor of Canada’s largest city was under surveillance by the municipal police force he oversaw as part of an investigation into allegations of drug trafficking.

He famously told a scrum of reporters that there was no truth to reports that he told a female staffer he wanted to “eat her pussy,” bragging as an afterthought, “I’m happily married. I’ve got more than enough to eat at home.” The resulting media storm apparently required his ashen-faced spouse to stand by his side while he made yet another public apology for his appalling behavior.

Did any of this end his political career in our painfully politically-correct country? Yes and no. As Ford was spiraling out of control, Toronto city council voted to strip the mayor of many of his powers — a move Ford equated with a “coup d’&eacutetat.” But his bedrock support from suburban voters seemed almost unshakable. In the final days of our federal election last November, former prime minister Stephen Harper even courted the disgraced former mayor in hopes of currying favour with his enduring fan base.

While Trump seems to be flailing right now, some recent polling shows this race is far from over. America should beware the lessons of Rob Ford. Disaffected voters, a celebrity populist candidate and a complacent political class are a toxic mix for democracy. If anything, the success of noxious politicians such as Trump and Ford serve as an ominous bellwether of rot in our public process.

If voters don’t feel respected, listened to or included in our democratic system, then opportunistic political interlopers may well carry the day. Self-interested operatives in both major U.S. political parties need to hear that message loud and clear.

While Toronto survived Mayor Rob Ford, the prospect of President Donald Trump is another matter altogether.