There was a time when it was frowned on for the mayor of a major city to smoke crack and hang with shady characters. And while Rob Ford has much to answer for, his supporters in "Ford Nation" have been on a dangerous bender of their own. 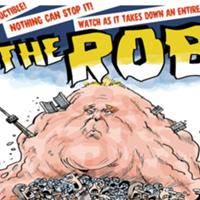 Mayor Ford's puzzling popularity in the face of one salacious scandal after another seems propelled by his cheapening of values that appeals to a morally lazy electorate. Like a pair of drunks egging each other on, Ford and his die-hard supporters are enabling each other's bad behaviour that goes far beyond mere substance abuse.

Ford's everyman appeal stems in part from him making it respectable to indulge our ugliest instincts. Don't care about the poor? Neither does he. Are you a racist and a homophobe? So apparently is the mayor. Drive when drunk? Who doesn't? And while you might not smoke crack or have been charged with assaulting your wife, in case you do, the Chief Magistrate of North America's fourth largest city has got that covered.

It's not just that Ford's supporters are overlooking his appalling behaviour; his core beliefs (or lack thereof) are making them look good, and they love him for it. This dangerous dumbing down of democracy is certainly not limited to Toronto's suburbs.

Prime Minister Stephen Harper has made a career of appealing to the smallest of human sentiments. The latest speech from the throne was notable mainly for its myopic focus on consumer trivialities like cell phone rates and cable costs -- as if the highest ideal that Ottawa can aspire to is to make it cheaper to tune in to Honey Boo Boo.

Many Canadians now have politicians that share their unchallenged values. Harper is spending billions on prisons unencumbered by evidence that crime rates are falling or that incarceration exacerbates criminality. Scientists somewhere are making depressing proclamations about climate change, but who honestly has the energy to think about such things?

The most affluent generation in human history feels justified in being outraged at having to pay taxes for services, and many leaders are getting elected and re-elected indulging such co-dependent denial.

South of the border things are even more far-gone. Voters who are full blown bigots, superstitious wackjobs, conspiracy theorists or gun nuts all have political representation to legitimize their ignorance. The Tea Party brought the U.S. government and the world to the brink of financial ruin believing that defaulting on the national debt was a desirable outcome. Elected officials like Ted Cruz and Michelle Bachmann have become celebrity avatars for their constituents' stupidity.

If voters want to eat birthday cake for every meal, there is a robust roster of opportunistic politicians happy to tell them it's a balanced diet.

It was not always so. Lester Pearson won a Nobel Peace Prize for his courageous diplomatic work inventing the now long-discarded practice of military peacekeeping. Pierre Trudeau battled political foes and provincial interests to ratify the Charter of Rights and Freedoms. Despised by many during his remarkable life for such difficult and principled work, in death his casket was borne by both Jimmy Carter and Fidel Castro. Even Brian Mulroney took a principled stand against both apartheid and U.S. military intervention in Central America.

Decades later, we largely leave our desire for public heroics to millionaire hockey players or contestants on American Idol. Politicians are part of the problem and at best make us feel better by being even worse than we are.

In the past, Canada has given the world many inspired gifts of tolerance, global leadership and a belief in making our country and the world a better place. It seems of late we have lost that commitment to excellence and simply let ourselves go.

Rob Ford as a person with an obvious problem seems to be hitting rock bottom -- the only place where addicts have the chance to turn their life around.

Canada too is hitting rock bottom. We have a prime minister whose office is apparently under investigation for criminal wrongdoing, including perhaps the bribing of a senator. His robotic denials in the House of Commons have become so laughable that the Opposition is literally laughing. Abusing the truth these days seems not even worthy of an energetic lie. Somehow this has become normal. We can and must do better.

As Rob Ford careens towards catastrophe or redemption, we should all reflect as voters (or people too lazy to vote) on our role in contributing to this debacle. Ford obviously needs a period of unvarnished self-reflection, as do we all.