"Denial is also self-reinforcing -- once you make the first denial, you tend to commit to it; you will deny, deny the denial, deny that and so on."
-- Robert Trivers, U.S. evolutionary biologist 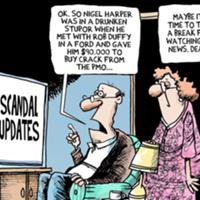 Moving Beyond Our Obsession with Stephen Harper

Just like Ford Nation, Canada has been caught in the throes of an addiction. What enables our addiction is what fuels Rob Ford's: willful self-deception.

We are on the brink of becoming an indulged and stupefied citizenry willingly bullied by our leaders.

We are on the verge of losing our way as a resource-mining people just as surely as Rob Ford and Stephen Harper have lost their respective paths in an elaborate labyrinth of denials.

One man is out of control while the other seeks to control everything. Both privileged white men hate the media and see themselves as underdogs that owe the public no accountability.

In Ford Nation and Harperland, the abuse of power seems to know no limits; due process gets no respect and democracy is some fickle notion to be robo-called away with blatant fraud.

Rob Ford, the mayor of a city with great but stifled potential, brazenly insists that an alcoholic can competently run a cosmopolis of four million.

He refuses to acknowledge his government's public addiction to bitumen revenue.

In Harperland Tories deny the tar sands are Canada's fastest growing source of emissions as though it were simply some inconvenient video. Or they disband and defund the very climate-change programs and science that track the rising liability of what will soon amount to 20 per cent of the nation's total emissions.

But these denials are all connected to an inconvenient financial addiction: Ottawa stands to collect 41 per cent of bitumen's $126-billion revenue stream by 2020 and that $50-billion is now funding a political revolution to re-engineer Canada into a right-wing petro state.

Canadians and their incoherent media still can't believe this incremental yet relentless subversion is happening, and remain in a state of denial as deep as Rob Ford's alcoholism.

Meanwhile Ford still can't admit that the emissions of a crack pipe might affect his judgment let alone his suitability to hold public office anymore than Harper can admit that greenhouse gas emissions from bitumen pipelines might ruin the nation's international reputation.

And on Monday, as Rob Ford ran amok in council, knocking to the ground a grandmother councilor, and as Ontario's Liberal premier and Conservative opposition party leader both called for Ford to step aside and seek help, Prime Minister Stephen Harper could only offer this mild assessment of Ford's world-riveting meltdown: "troubling."

Harper's enablers, like Ford's, are legion. They may shed a tear for an incoherent mayor but not for the acidification of the oceans or the ruination of Arctic ecosystems. Natural Resource Minister Joe Oliver, when not battling Europe's Fuel Quality directive, even told La Presse this year that climate change is an exaggerated science.

Foreign Minister John Baird went further. In 2012 he bluntly explained that the government defunded the National Roundtable on the Environment and Economy because it didn't follow Harper's family values on climate-change denial. The agency, established by Tories, committed the sin of admitting there was a real moral problem to address.

So dissent does not appear to be a libertarian virtue in Toronto or Ottawa. Bullying is a virtue. In fact, Harper and Ford both possess an outsized arrogance bred in the bone.

The prime minister, the son of an Imperial oil executive and long-time climate-change denier, now pushes bitumen pipelines with the zeal of a crack dealer. He has even told the president of the United States, a sovereign leader no less, that Obama can't say no to Keystone XL.

The spoiled Etobicoke millionaire was, for a day at least, rewarded for his anti-social behaviour and given his own television show on Sun TV. Who was the intended audience? Those Canadians who were expected to watch in order to have their fury stoked are in one respect no different from the demographic who were assumed to just tune in for an ironic laugh. Each, in their own ways, were targeted for their abilities to remain in denial. Rob Ford holds no solutions for Ford Nation's populist anger. But neither is he a harmless cartoon character. He is, he should be, our wake up call.

The distinguished 19th-century pathologist Rudolf Virchow once noted that humanity's greatest curse was that "it can learn to tolerate even the most horrible situations by habituation." And those situations include the debasement of political institutions and traditions.

At the root of this despoliation lies Tea Party North and Harper's Exxon Mobil ideology, a raw copy of Thatcherism.

In this thoroughly debased Canada it's ok for a millionaire jerk to smoke drugs as long as he remains a die-hard Harper supporter and friend of Finance Minister Jim Flaherty. But it's not ok to accept a $90,000 cheque if you can't follow the engineered script by the PMO's office that delivered the money in the first place.

So let's admit it: Canada has hit rock bottom as a nation. And we can thank Tea Party North, as well as the apathy of country's complacent citizens, for taking us to this fractured geography of addictions, denial and rule by bluster and intimidation.

This is not reality TV here but the emergency room of modern Canadian politics. Ford's alcoholic outbursts and Harper's imperial rule are not personal tragedies but public ones.

How many people would get on a plane run by a pilot high on crack cocaine?

How many people would enter a hospital room where the chief surgeon hands out money to assistants committed to ideology instead of the weight of evidence?

And how many would step into a court where the very man that probably ordered you to break the law in the first place judges one guilty?

Tellingly, it now takes an 82-year-old war veteran to remind us of the depth of our political debasement.

The veteran called the man "a druggie."

In so doing he refused to deny reality and set a higher political standard for a nation that has forgotten what standards are.