I have some sense of Alberta; we used to take our kids there every summer and we explored it from Cardston to Jasper to Lloydminster to High Level. I doubt that any road in heaven has better views than Highway 22 along the Front Range on a summer day. 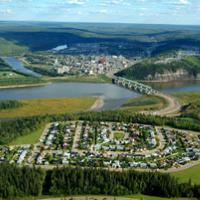 The Mordor Diaries: 'Are You Going to Slam Our City?'

I'm amazed at how quickly Alberta and everyone else adopted that principle, and how it seemed so natural that no one even commented on the political nature of the response.

Walk into almost any restaurant in central or southern Alberta with ID showing you're from Fort Mac, and dinner is on the house. Trapped on Highway 63 with no gas left in the tank? Some dude with the ability to buy and transport jerry cans of gas delivered a jerry can to you when you needed it, handed to you at no expense. Finally arrive at a shelter with exhausted kids and poopy diapers? Beds, food, and fresh new diapers provided right now.

So you've reached Lac La Biche or Edmonton with the clothes on your back and a maxed-out credit card? You and your spouse get $1,250 each and $500 for each kid, just to tide you over until things settle down. Find some clothes over there that fit you.

The Canadian Red Cross will top that up with $600 per adult and $300 per kid, courtesy of the $50 million donated by your fellow Canadians.

Meanwhile, retailers are falling over themselves to get more supplies to you, including filling your prescriptions. They'll worry about their bottom lines some other day.

And the only work you needed to do to receive all this support was to keep breathing and get out of the disaster zone. No application letter, no hiring interview -- you got the support because of who you are, an Albertan in trouble, not because of whatever the hell you did for a living before the fire. This sure wasn't Bolshevism, with its bureaucracy and its violence. This was housewives' communism, what neighbourhood mums do to help each other out.

For that matter, the family itself is a communist institution. Can you think of a family where the kids have to earn their keep right from birth and get fired if they don't? Would you want to grow up in one?

Come to think of it, we put parents in jail if they're convicted of failing to provide the necessaries of life to their children, as Alberta did just last month. "The kid never did an honest day's work in his life" is not a sufficient defence.

We treat our kinfolks kindly

The most positive words we have about social relations come from family words. "Kind" means gentle and considerate, the way you treat your relatives. It comes from the old English word "gecynde," which like "kin" and "gentle" comes from Greek "genos," meaning the family, the origin of all its members. Father, mother, sister, brother -- those we acknowledge with those terms can make almost any claim on us, and we on them. We may quarrel with them, they may infuriate us, but they're family.

Somehow family communism disappears in the larger society, where every family finds itself in a war of all against all. To support and protect his own family, dad may exploit and bully other dads, the guys he's hired -- who are only trying to support their own families. At the hockey rink, dads get into brawls about their kids' performances on the ice. What we usually call "society" is an uneasy truce. It's somewhat mitigated by social capital, the level of trust and mutual respect in a community -- our willingness to treat others as if they were family.

Fort McMurray has, for a time at least, burned anti-social attitudes to ashes. It was inspiring, but not really surprising, that firefighters shrugged off the loss of their own homes while struggling to save their neighbours'. Mounties directed evacuation traffic while embers fell around them. Teachers stayed with their students until parents could collect them.

The Fort McMurray SPCA even secretly returned to the scorched city to rescue pets left behind -- what neighbours and strangers alike had been doing from the start of the evacuation.

So Alberta in general and Fort McMurray in particular have turned out to have a hell of a lot of social capital, expressed in untold amounts of unpaid and hazardous labour done for other people. That's another communist value going all the way back to the New Testament. Jesus didn't charge anyone for the loaves and fishes, or for turning water into wine. And no one in the Gospels seems to care who picked up the tab for the Last Supper; the only financial transaction involved Judas, and we know how that turned out for him.

Social capital isn't infinite. But it can be replenished by positive reinforcement, by policies that put people on more equal terms. The cash payments to evacuees are a foreshadowing of basic annual income -- an acknowledgement that every person has value regardless of the work they do or don't do.

And when the paid work is firefighting or directing evacuee traffic, those doing it get a bonus of sincere praise and respect. That in turn builds social capital by giving more prestige to government agencies. Retailers' donations may reduce their profits, but they get it back, and then some, in reputation and customer loyalty.

At some point Alberta will revert to a capitalist economy, and we can all revert to quarrelling about who should get what and how much of it. We'll start arguing about pipelines and climate and the costs of rebuilding. It will sometimes be as angry as any other family fight.

But now Albertans know that when smoke is the air, they can count on one another. If all Canadians have gained that level of trust in others, we'll have learned something very positive about ourselves out of the ashes of this disaster.