Can the NDP see the writing on the wall? More than 1,500 delegates will be heading to the federal NDP's Edmonton convention next Friday. Do they realize how critical their vote on their party leader will be? 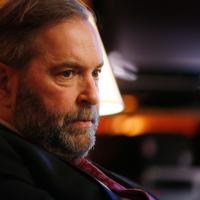 If delegates recognize that the party faces an existential crisis, they will reject Thomas Mulcair and confront the hard reality that Justin Trudeau is making the NDP irrelevant.

It's an intriguing paradigm shift. For 10 years, Stephen Harper fantasized about condemning the Liberal party to irrelevancy. Now the Liberals are in a position to destroy the NDP, sending the party, like Social Credit, into the dustbin of history.

The chances that the party can find its way out of this crisis are slim. Getting rid of Mulcair is just one step. The party would still have to find a new leader who embodies the social democratic values of the founders of the CCF/NDP. That will be hard, because the process requires a politically engaged membership who actually own their own party.

And that's a problem, one that goes back to when the CCF -- the Co-operative Commonwealth Federation -- joined with the labour movement to form the NDP in 1961.

That's when the party embraced professionals to run what had been a genuine movement. For the last 55 years, members have become increasingly marginalized, called upon only to donate and knock on doors during election campaigns. That approach reached its apex under Jack Layton and Tom Mulcair.

Now the NDP has to grapple with a disastrous situation. Party members made a deal with the devil when they chose a conservative autocrat as leader -- one who now apparently believes he can lead the party to victory into the next election.

It's amazing Mulcair has not been called to account for his post-election musings denying that he or anyone in the NDP hierarchy is responsible for the party's disastrous drubbing. First, the official party messaging argued the only reason the NDP did so badly was its principled stand on the niqab issue (though Trudeau took a similar position). Then the party reminded members that despite the loss of opposition status and over half the NDP's seats, the outcome was the party's "second-best result" ever.

Someone must take responsibility

Mulcair finally faced the national media three months after the election on Jan 18. He wanted to talk policy, but the media wanted to know about his future.

"It wasn't there for us this time," Mulcair said. "As a team, we haven't been to the finals very often, and I can tell you that we learned a lot. Next time, we'll be there to get the cup."

Seriously? A hockey analogy? "Next time" isn't the game next week, it's four years away.

And it's notable that the response was in the passive voice: "It wasn't there for us." What we didn't hear, and should have, was "We completely bungled the election and betrayed our supporters and the thousands of people who worked their butts off for months and gave us millions of dollars to campaign for their values. I am resigning."

When asked what support he needed at the party convention to stay on as leader, Mulcair said any result over 50 per cent. What leader dedicated to his party would continue to stay in the job if almost half of the convention delegates rejected his leadership?

Mulcair's musings reveal a disturbing inability to think about what is best for the party. It's all about him. Asked in the same interview if he had ever thought about stepping down, Mulcair replied never -- "It's not in my nature."

In a self-serving interview with The Canadian Press, Mulcair described the moment he "decided" to stay on as leader.

"I finished that evening; Chantale (Chantale Turgeon, his deputy chief of staff) was with me, we drove back to Montreal and I said, 'We are going to continue the fight.'" There was no hint of awareness that this might not be his decision to make, or that his feelings were secondary to what the party needed.

For almost four months Mulcair refused to accept any responsibility for one of the most catastrophic election debacles in Canadian history. It wasn't until Feb. 10 that he sent a letter to party members saying "our campaign came up short. As leader, I take full responsibility for these shortcomings."

But this conventional mea culpa is meaningless, because taking responsibility means recognizing that there are personal consequences, a price to pay. If I borrow my friend's car and smash it up I "take full responsibility" by paying for it. In the NDP, no one really takes responsibility.

To its credit, this week the party released a frank report on the election that identified the campaign's weaknesses, basically confirming what most commentators had already observed. But no one will likely be held responsible in any meaningful way.

Mulcair's responses to the election loss suggest a sort of political post-traumatic stress disorder and an inability to grasp reality.

But the federal budget day delivered a fatal blow to the notion the party could survive with Mulcair as leader. Trudeau brought down what Armine Yalnizyan of the Canadian Centre for Policy Alternatives called "the most progressive budget in 40 years."

A political party, or a cult?

Tossing out the "run from the left and govern from the right" formula the Liberals have relied on for decades, Trudeau moved the Canadian political centre a huge step to the left, leaving the NDP completely stranded. The NDP cannot craft a credible response to this budget given its platform and Mulcair's deeply conservative politics. It can't come back from where it is today.

The response is cynical and misleading. "The Liberals' budget was long on rhetoric but short on dollars when it came to keeping their promises to Canadians," the NDP claimed.

How a leader whose platform promised a balanced budget (which was not party policy) could pen this line with a straight face is beyond me. Should the Liberals have racked up a $50-billion deficit so they could keep all their promises? The NDP -- which should support virtually every Liberal expenditure -- would have had zero dollars for new programs.

The party document then lists unkept (so far) Liberal promises without acknowledging the long list the new government has kept.

Pundits and NDP members alike should have been confident by now that the party would reject Mulcair and commit to returning to its social democratic roots and its traditional role as a party of big ideas.

But this is the NDP, and many commentators have noted the party hasn't traditionally dumped its leaders for losing. The implication is that this is admirable. I am not so sure.

I remember heated arguments with an NDP friend in Saskatchewan who dismissed my involvement in "useless" social movement organizations. I suggested, only half kidding, that the NDP was not so much a political party as a cult. There was a siege mentality in the NDP rooted in feelings of ideological marginalization reinforced by a hostile media. They hated social and economic justice groups working outside the political system because they couldn't control them. Any criticism was tantamount to heresy -- and disloyalty.

In fact decades of observing the NDP from the outside has convinced me that loyalty is far and away the most important principle in the party's culture. It is more important than political philosophy, party democracy, member engagement, and even more important than winning. In the NDP, it seems, so long as you have been a loyal member since you were 14 you will likely never be held accountable, no matter what mistakes you make.

Loyalty is an important principle in any party. And if the NDP had a leader who knew when to get off the stage, it need not be a problem for the party.

But when a leader like Mulcair is prepared to exploit it to cling to power, it is tantamount to a political suicide pact.