Justin Trudeau is fine with violating Canadians' basic rights enshrined by his father 35 years ago. 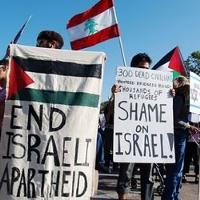 This we learned when Trudeau's government chose to "condemn" any Canadian who supports a non-violent strategy of Boycott, Divestiture and Sanctions (BDS) until such time as Israel recognizes the rights of the Palestinian people.

Specifically, on Feb. 22, Trudeau and his party supported a Conservative resolution opposing the campaign "which promotes the demonization and de-legitimization of the State of Israel," and called upon the government "to condemn any and all attempts by Canadian organizations, groups or individuals to promote the BDS movement, both here at home and abroad."

Never mind the Charter of Rights and Freedoms. The resolution "makes it a thought crime to express an opinion," as the NDP's Thomas Mulcair (an ardent supporter of Israel by his own description) said. The NDP and the Bloc, joined by three Liberals, voted against the resolution.

That the Liberal government is so in alignment with Israel lobby groups raises a number of questions: Just who actually makes Canadian policy towards Israel? Did Trudeau think this through at all -- such as, is this in Canada's interests? But perhaps more to the point, is it even in Israel's interests? Does the Trudeau government have some brilliant ideas about how to get Israel to the bargaining table? Or does it believe the current situation doesn't need resolving? It makes me feel like Stephen Harper still rules the day on this critical foreign policy issue. Indeed the resolution smacks of Harper's declaration that criticism of Israel's government is the "new anti-Semitism."

We are left to wonder whether the Trudeau government can imagine any action by Israel that would cause it to "condemn" its government rather than its critics. And to wonder whether it seeks to further polarize the region or help cooler heads prevail. Giving carte blanche to the actions of Israel's increasingly extremist government simply reinforces its determination to never negotiate and to keep pushing the envelope, whether it's building new settlements or slaughtering civilians in Gaza.

Against that prospect, how many Parliamentarians have even the slightest clue what the Palestinians are seeking through the BDS campaign? Do they know its origins?

As stated by BDS movement leaders, Israel must: "End its occupation and colonization of all Arab lands and dismantle the Wall; Recognize the fundamental rights of the Arab-Palestinian citizens of Israel to full equality; and Respect, protect, and promote the rights of Palestinian refugees to return to their homes and properties, as stipulated in U.N. resolution 194." This latter demand is hotly rejected by Israel even though Jews from literally anywhere in the world have, through the 1950 Law of Return (to Israel and now the occupied territories) the same right.

The BDS campaign (which boycotts only goods made in the territory) was inspired by the successful boycott and sanctions campaign that finally brought an end to South African apartheid -- a campaign, incidentally, given a major boost by none other than then prime minister Brian Mulroney. The BDS campaign was launched in 2005 by 170 Palestinian civil society groups representing virtually every sector of Palestinian society "including all political parties, unions, refugee networks, NGOs, and organizations representing Palestinians living under occupation, in Israel, and in exile." The decision was rooted firmly in a commitment to non-violence and in international law regarding the illegal occupation of Palestinian territory.

In Israel, a vibrant debate

Israel's occupation is routinely compared to apartheid by Israelis -- and not just critics of the government. Michael Ben-Yair, Israel's attorney general from 1993 to 1996, wrote:

Other senior Israeli political figures agreed. Shulamit Aloni, education minister under Yitzhak Rabin, and former prime minister Ehud Barak both made the comparison. Ehud Olmert, another former PM, declared: "If the day comes when the two state solution collapses, and we face a South African-style struggle for equal voting rights… the State of Israel is finished." With the two-state solution on life-support -- and no pressure on Israel from the West to revive it -- the situation so feared by Olmert is arguably already here.

In fact, the BDS campaign may be Israel's best hope to avoid Ehud Olmert's nightmare. Perhaps that is why Israel's extremist Prime Minister Benjamin Netanyahu is so determined to fight BDS. In a 2014 speech to the powerful pro-Israel U.S. lobby group AIPAC, he referred to the BDS campaign 18 times, calling on American Zionists to "fight back" against BDS advocates.

The BDS campaign might not worry Netanyahu so much if it weren't for the fact that Israel now ranks near the bottom of pile when it comes to world opinion. A BBC poll in 2013 interviewed more than 26,000 people in 25 countries and found only 21 per cent of participants had a positive view of Israel, while 52 per cent viewed the country unfavourably. Only Iran, Pakistan and North Korea fared worse.

If Justin Trudeau and his government believe they are doing Israel a favour by supporting the repugnant Conservative thought crime resolution, they could not be more mistaken. Every time a Western government turns a blind eye to Israeli apartheid it reinforces and extends that system by signalling to Netanyahu that he can do whatever he pleases.

By steadfastly denying the apartheid reality in Israel successive Canadian governments in fact betray the long term of interests of that country -- not to mention, of course, those of millions of Palestinians.