Every time the New Democratic Party fights an election, win or lose pundits will offer it advice on how to do better next time. Not that the pundits would ever vote NDP, no matter how much advice it took. 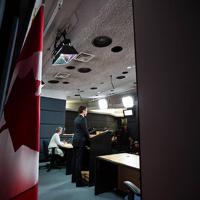 After Oct. 19, the NDP needs real advice, not the patronizing comments of right-wingers. As a long-suffering, off-and-on supporter of the party, here's what I suggest Tom Mulcair and his much-reduced caucus do between now and 2019.

Face it: Justin Trudeau and the Liberals outsmarted you. Instead of standing up for principles and good ideas, you offered us Stephen Harper with a beard, obsessed with the need to balance the damn budget regardless. Now it's time to outsmart the Liberals -- not by moving left of them, but by moving ahead of them, where the NDP has usually been.

Forget about getting back to the Regina Manifesto. That economy is gone, and its workers are long dead. The point is not to get rid of capitalism, but to put it to better use than capitalists have for the last two centuries.

Instead, reframe the discourse. By inching ever further to the right, the NDP has abandoned a vast range of political solutions and good ideas. Now it can only quibble about the right wing's so-called solutions.

So make "socialism" a thinkable option again. But make it clear that it's not a "nanny state." If anything, socialism is like the household managers who look after the care and feeding of the one per cent -- only for the other 99 per cent. Socialism offers a service state that provides everyone with the basics for a decent life and lets them take it from there.

Treat the rich like hockey stars: people with some enormous talents, competing with other people who are enormous thugs. Let the rich do their thing, but within firm rules, and put the thugs in the sin bin every time.

The NDP message to the Canadian one per cent should be something like this: We want you to get rich and stay rich and not screw it up yet again. We've got your back, the way Semenko protected Gretzky. You will score more goals, have more fun, and make more money that way. You will also pay way more taxes as an affordable cost of doing such amazing business. After all, we're creating the amazing business environment you get rich and stay rich in.

The NDP should also co-opt the game-changers like Elon Musk, Mark Zuckerberg and Bill Gates, and ask for their advice on maintaining a reasonable and sustainable life. These guys are now imposing their whims on everyone else, backed up by the billions we've paid them. So in global health we're fighting the diseases Gates doesn't like, and Musk will get us to Mars whether we need to go or not.

OK, it's their money. But meanwhile pick their brains, ignore their egos and incomes, and support them when they've got ideas that will help everyone else. In other words, don't just protect existing jobs; help create far better future jobs in whole new industries.

I'd also like to see the NDP arrange a friendly merger (or at least alliance) with the Greens, and start recruiting Liberals whenever Trudeau moves to the right -- as he could well do on the Trans-Pacific Partnership deal, which the NDP should fight tooth and nail.

When one Canadian child in five lives in poverty, the current social contract should be torn up. Forget the idea of "equal opportunity" when poor kids start with no such thing. The contract should be a guarantee of equal outcomes for basic needs, where everyone gets the same good nutrition, safe shelter, adequate health care and challenging education. What Canadians do beyond that point is up to them. But they should not be in leg irons when the starter's pistol goes off.

Hope for the best but plan for the worst. The New Democrats echoed Harper on the need for a "balanced budget." They failed to admit that a balanced budget amounts to living from paycheque to paycheque, and too bad if something goes wrong like Dad getting sick or a flooded basement.

And please ignore the people moaning about going into debt our children will have to pay off. The point of running deficits in an emergency is to make sure our children have a country worth inheriting.

Also ignore the idiots who moan about "fat" in the budget. "Fat" is a good thing, because something will always go wrong in the coming year, and thereafter. It will be worse than any contingency fund can handle, whether it's drought or forest fires or floods.

The NDP doesn't even need a crystal ball to see the sorrows of the coming decades: ever more refugees ever more climate disasters, and ever more crazy political reactions to them. All will have brutally expensive economic, political and moral consequences.

Flipping the bird to all these dangers, the NDP should offer a very ambitious national goal: to own the global podium by making Canada the richest, healthiest, longest-lived country on the planet, despite climate change and political upheavals.

To get there, New Democrats should offer a new national business plan: the world's best free maternal care, daycare, education and public health; and an intense focus on productive, sustainable industries where we can lead (and sell to) the world. The NDP would plan to tax polluters out of business, and to subsidize green industries at least as well as war industries and oil.

This plan would not be to distribute the wealth so much as to prime the pump for still more wealth, generated by millions of Canadians who just need to be healthy and educated to start making a lot of money and paying a lot of taxes.

Getting to such a position will require patience and honesty. The NDP should stand for solutions, not just for election. If voters reject you, study your electorate and sell your solution better. Change your policies when the facts change, not just to sound more like the other guys, as you've been doing since the 1970s. That's playing the right wing's game, on their turf, and accepting their limits of acceptable debate.

The NDP should commit to combat only when facing a real threat to national life, not just to make our allies happy. We should assume that everyone we send to a war zone will come home dead or wounded; we should therefore commit to lifelong care for all veterans and their families, and we won't send them without that commitment.

Policies like these would send the right-wing pundits into a tizzy, but that's not the point. The point is to give Canadians the widest possible range of options for the decisions they make. If an option isn't offered, it doesn't exist.

But if the NDP does offer such options, and enough Canadians start thinking about them, the Liberals and Conservatives will have to start inching back toward more humane and sustainable principles. They could even start stealing NDP ideas, as they used to do.

And some of their followers might even decide to vote for the party originating those ideas.