One beautiful, dead three-year-old has likely changed the outcome of our current federal election, but that is the least of Alan Kurdi's effects on history. He has also stampeded us, along with the rest of the world, into confronting a mass tragedy we have tried hard for decades to ignore. 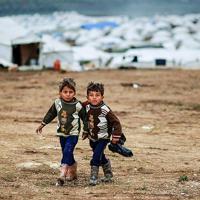 Harper's Worst Offense against Refugees May Be His Climate Record

In the federal election, the Conservatives have tried to put the best face possible on the small number of Syrians they have accepted after four years of civil war. Immigration Minister Chris Alexander inflated the number by adding Iraqi refugees; it got him nowhere.

But the harassed Alexander actually had a point. The Middle East has been awash in refugees for 70 years, most of them Arabs, and we've rarely cared about any of them. Now two Syrian toddlers and their mother (all Kurds, not Arabs) have died, and we demand more Syrians -- and only Syrians. Why not offer a haven to some of the other refugees as well?

The Syrians, admittedly, pose enough of a challenge. Out of the country's 22.8 million people, UNICEF estimates 7.6 million had been internally displaced by the end of last year. About four million more -- as many people as live in Montreal -- have fled the country, most of them to Turkey, Lebanon and Jordan. In effect, half the country has been displaced, with more being displaced every day.

Faced with these numbers, the 10,000 the NDP wants by the end of year seem insultingly trivial -- a quarter of one per cent of Syrians outside Syria. Germany's Angela Merkel has said her country could accept 500,000 refugees a year for the foreseeable future. Even if she accepted only Syrians, it would take eight years to absorb those now living outside their country.

In a report issued last June, the UN High Commission on Refugees (UNHCR) described Syria as "the world's biggest source of internally displaced people and refugees." But they are far from being the only source.

UNHCR pointed out at the end of 2014 "there were 38.2 million displaced by conflict within national borders, almost five million more than the year before." That was largely thanks to wars we've barely noticed: Ukraine, South Sudan, Nigeria, Central African Republic, and the Democratic Republic of Congo. The sub-Saharan wars have driven some all the way to Libya and the dangerous waters of the Mediterranean, but most remain trapped in combat zones.

Worldwide, almost 20 million refugees live outside their home countries, UNHCR said, 5.1 million of them Palestinians -- third- and fourth-generation refugees, displaced when Israel was created in 1948. All told, UNHCR concluded, almost 60 million men, women, and children "were forcibly uprooted by conflict and persecution at the end of last year, the highest ever recorded number."

That number has grown in 2015. At last year's rate, every day sees another 42,500 new refugees, asylum seekers, and internally displaced persons -- "a fourfold increase in just four years," UNHCR says. That would mean another 10 million as of Sept. 1.

We have done our considerable best to ignore this ongoing disaster. Few Canadians have ever heard of Dadaab, a refugee mega-camp in arid eastern Kenya that is home to 350,000 Somali refugees. But it carries on a hand-to-mouth existence as Kenya's fourth-largest population centre.

Radio Dabanga chronicles the endless nightmare of the internally displaced in Sudan, where Human Rights Watch recently documented government violence against civilians "that may constitute crimes against humanity."

Not a peep of complaint

Medecins Sans Frontieres is delivering psychological as well as medical care to people in Chad displaced by attacks from Boko Haram. Meanwhile, MSF also struggles to provide care for displaced people in Yemen, trapped in a civil war with a Saudi-led coalition on one side. The Saudis have been dropping bombs on civilians and attacking hospitals without a peep of complaint from their western allies.

It's not just Africa and the Middle East. The Dominican Republic has been deporting its Haitian-descended citizens back to a country many don't even know, while Venezuela has kicked out over 18,000 Colombians. Myanmar, supposedly moving back to democracy, is driving out its Muslim Rohingya.

When refugees from such countries do actually reach us, we get irritable; remember the Tamil boat people in 2010? You would have thought the underfed passengers were commandoes storming onto our shores to conquer us all. The sheer cheek of these people arriving by sea, when anyone with the price of airfare could turn up at the Vancouver airport minus passport and make a serious application for refugee status!

Similarly, the U.S. authorities for years automatically granted asylum to Cuban refugees if they could just step onto American soil. A Haitian on the same beach would be packed off home forthwith.

Alan Kurdi has roused us from our moral coma, but clearly we can't atone for it just by welcoming other Syrians. He was no different from the 20,000-plus other children under age five who die every day, according to Worldometers -- victims of poverty and the violent struggles to seize what little wealth their countries have.

In theory, we have a responsibility to protect the people of other countries whose governments persecute them or fail to care for them. Do we have a moral duty of care for the Rohingya, the Haitian Dominicans, the 21 African countries currently producing refugees? When half the world's refugees are children, do we owe them anything? And should we admit those refugees as well as the Syrians?

If we don't, shouldn't we at least be ready to witness the consequences for those we turn down? If we do admit them, are we ready to oversee an enormous transformation of Canada from a multicultural country to an omnicultural one -- a vast, cold, empty country that becomes home to at least a few of all the homeless 70 million?

In this light, Stephen Harper's fussing about ISIS sleeper agents sneaking into Canada among the Syrians is beside the point. This is bigger than the bogeyman du jour. No matter how many they behead, the fanatics of ISIS will be swept aside by the coming migration tsunamis, along with the Saudis. Countries like India, Pakistan, and China will be overwhelmed like the Fukushima nuclear reactor station in 2011.

Many of today's 70 million refugees are our own chickens come home to roost. European imperialist nations pulled out of Africa, south Asia, and southeast Asia after the Second World War, leaving those regions to the whims of local psychopaths and crooks. The west's idiotic wars in Afghanistan and Iraq ruined what little order remained in those regions, and Canada's idiotic intervention in the Syrian civil war has only made matters worse.

However many we accept for now, some screening will be needed -- but not for ideological contamination. The World Health Organization recently pointed out that refugees live under unsanitary conditions that promote communicable diseases and other problems: "psychosocial disorders, reproductive health problems, higher newborn mortality, drug abuse, nutrition disorders, alcoholism and exposure to violence."

Climate change and social breakdown will only displace more, including many families with cute kids like Alan and Ghalib Kurdi. While the western industrial nations struggle to raise the drawbridge and maintain the status quo, more Alans and Ghalibs will die. They won't all be photographed as Alan was, but they will die anyway. And they will go on dying until we realize that we can no longer click to a pleasanter channel or website.

This is the century and the situation we can't ignore or deny. How many tens of millions of Alans and Ghalibs will have to die in the coming decades before we realize that we are accomplices in their deaths? And when we do, what will we do about it?