"The race is not always to the swift, nor the battle to the strong, but that's how the smart money bets." -- Damon Runyon, author and newspaperman 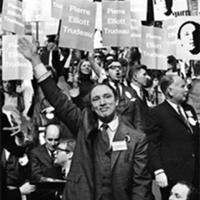 Past Trudeaumania Faded Fast in BC

British Columbia is a battleground province in this federal election -- and there are only two parties actually fighting it out -- the governing Conservatives and the official opposition New Democrats.

Liberals and Greens will strongly object but the numbers are clear, whether you look at provincial polling, currently held seats or past political history: the Battle of B.C. is Team Stephen Harper versus Team Tom Mulcair.

It's one reason why NDP leader Mulcair was in Vancouver Sunday and will be a frequent flyer to the West Coast till the October 19 vote.

Why Conservatives and NDP?

Start with the 36 Members of Parliament from B.C.: the Conservatives won 21 seats in the 2011 election; the NDP took 12; the Liberals two and the Green Party one. (B.C. gets six news seats this election.)

But those results only tell part of the daunting story for the Justin Trudeau Liberals and Elizabeth May Greens.

Who came in second place in the 21 Conservative seats? The NDP was runner up in 18, with the Liberals second in just three, the Greens in none.

That means the NDP will put relentless pressure on Liberal and Green voters, who overwhelmingly want to end Harper's reign even if it means voting for their second choice party.

The Liberals know exactly what a "third party squeeze" looks like -- because they used it successfully for years against the NDP. But now the roles are reversed and amplified by Trudeau's fall into consistent third place showings.

And the Greens, who hope to build on Elizabeth May's 2011 breakthrough in Saanich-Gulf Islands, are even more pressured not to "split" the anti-Harper vote.

The NDP are also the beneficiary of the Conservatives' massive advertising campaign attacking Trudeau as "just not ready" to lead Canada, driving his numbers down and shaking some Liberal voters into the NDP camp.

But Trudeau himself has helped the NDP with disastrous decisions to support the Conservatives' security bill C-51 and recruit tainted Tory MP Eve Adams to run for the Liberals. Trudeau's promise to amend C-51 if elected reinforced the Conservative attack line and Adams' ill-fated losing campaign only alienated Liberals, who asked why an MP rejected by Harper was any prize.

The Liberals are also fighting history in B.C. The battle was also between Conservatives and New Democrats in 2008's election, with the Tories taking 22 seats, the NDP nine and the Liberals five, with no Greens.

In 2006 the Conservatives took 17 seats in B.C. as they formed their first government since the Brian Mulroney era ended in 1993, while the NDP took 10 to surpass the Liberals' nine under Paul Martin's ill-fated leadership.

Then there's regional polling. Forget any national polls with tiny sample sizes of under 200 BC voters -- their margins of error are huge and accuracy abysmal.

Website ThreeHundredEight.com instead combines multiple polls to improve accuracy with a larger aggregated sample size -- and the latest numbers show the NDP leading with 40.4 per cent, the Conservatives at 27.7 per cent, the Liberals at 23.2 per cent and the Greens at 7.9 per cent.

Of course, all voters are wary of polling results predicting elections, especially in B.C. after the 2013 provincial surprise.

But looking at recent past results and current polling is a good indicator of political fortunes.

And going back further in history is no comfort for the Liberals, who have had a rough go in B.C. after the heady days of Pierre Trudeau's first election in 1968, when they took 16 of 23 seats and 41.8 per cent of the vote.

That result was the best they've achieved in the 47 years since then, even during Jean Chretien's three successive majority national election wins.

And there's no sign of Trudeaumania 2.0 breaking out in B.C.

The surprise victory of the NDP in Alberta this year may ironically give hope to Liberals and Greens that miracles are indeed possible, but remember that Premier Rachel Notley's crew quadrupled their vote over the last election.

In the battle for B.C., the odds are strong that either the Conservatives or the NDP will take the most seats -- and the one that does may well form the next federal government.