One of the consequences of fixed election dates is the permanent campaign -- like the one we're living through now. Another consequence: Given that everyone knows when the writ drops, the pre-writ period is now a political marketing free-for-all. 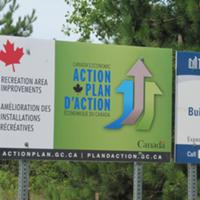 That's one reason behind a major ad buy that kicked in this week. The House has started its last sitting before it rises for the summer in mid-June, never to return before the election. The ad war is part of the pre-game show and attempts to shape voters' impression of the leaders going into the summer. Once they go off for the summer, Canadians won't really engage on the campaign until the writ drops after Labour Day for the Oct. 19 election.

The all-party ad blitz is part paid media and part earned media -- actually free media, through coverage of the ad campaigns in mainstream and social media. (Which is why Tom Mulcair was urging his Twitter followers Monday to re-tweet NDP ads.)

The Conservatives have released two ads. The first is a 60-second spot called "The Interview" in which two men and two women sit around a boardroom table discussing Justin Trudeau's resume, and conclude that he's "just not ready." This is called ‘defining your opponent' and it has worked well for the Conservatives in the past. In 2008, their tagline on Stéphane Dion was that he was "not a leader." In 2011, their take on Michael Ignatieff was that he was "just visiting." (Which turned out to be the case.)

In the "Interview" spot, the older woman says that "being prime minister is not an entry-level job." A younger woman adds that she's "not saying no forever, just not now." One of the men concludes: "Nice hair, though."

Imitation being the sincerest form of flattery, the New Democrats could take it as a compliment. Turns out the Conservatives, as reported by B.J. Siekierski on this page, ripped off the creative from a provincial NDP Manitoba ad targeting then-Conservative leader Hugh McFayden in 2011. "Nice suit, though," goes the last line of that one. (Mulcair has also been using the "not an entry-level job" line for months.)

The NDP have their own attack ad on Trudeau up on their website. It plays Mulcair's stand against "Harper's war" in Iraq and Syria against what it calls Trudeau's failure to oppose a mission "with no end in sight."

"That's another Liberal flip-flop on Iraq," the spot concludes, "and more proof that Justin Trudeau isn't ready to be prime minister."

So both the Conservatives and the NDP are putting out the same lines on Trudeau. Nice guy, not ready. But what's their offer?

One for the blooper reel

Harper narrates a 30-second spot called "Proven Leadership" in which he's seen working in his office in his shirtsleeves. "On a good day," he says at the end, "you get to go home feeling you've lived up to the job." And he turns off the light switch in his office.

He's been talking over a bunch of headlines highlighting the challenges of the job, including one from Bloomberg in 2009: "Canada's Harper Pins Future on $40 Billion Stimulus Package." There's a screenshot behind the headline of a bailed-out auto assembly plant -- which, as reported by CBC's Kady O'Malley, turned out to be a Camaro assembly line in Oshawa that GM is moving to the U.S. Whoops.

Mulcair narrates a 30-second spot about how "you work hard every day to give your family the best." The images are of a guy running his dry-cleaning business. He's a small businessman, not a guy in a union hall.

"I was raised on middle class values, and I'll work to strengthen the middle class," says Mulcair, as he sits down somewhere for a coffee. "Together we can bring change to Ottawa. I invite you to be part of it."

As for Trudeau, he's all about fairness -- as in #fairness, the Liberal hashtag on his child care benefits proposal. In one spot, he's hanging out with a couple and their three young kids.

It's interesting that the NDP and Conservatives are both focusing their attack ads on Trudeau at a time when he's struggling in the polls. From 39 per cent in an EKOS-iPolitics survey last July, he's down to only 26 per cent this week. As for Mulcair, mired around 20 per cent only a few months ago, he leads this week at 29.6 per cent -- call it 30 per cent. The Conservatives have dropped back from recent levels of 33 per cent to just 28 per cent. And this is with all the advantages of incumbency, not to mention the security issue, playing in their favour.

The NDP, with their Get to Know Tom Tour, was already on the move. The election of Rachel Notley in Alberta also gave the national NDP brand a boost. And here they are, on the doorstep of 30 per cent.

"Obviously with all this comes greater scrutiny," says a senior NDP campaign adviser. "We welcome that."

It goes with the territory.