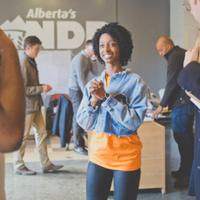 But a closer look at the fresh wind Premier-elect Rachel Notley used to blow away the ruling Alberta Progressive Conservatives shows that very few lessons apply to B.C.

So while BC NDP opposition leader John Horgan can rightly be extremely happy with what seemed an impossibility just months ago -- social democrats running oil-rich Alberta -- his party shouldn't presume its neighbours' surprise success can be copied here.

The political differences between Alberta and B.C. are far greater than any similarities.

First, Alberta's PCs were years past their expiry date after a 44-year reign, despite having a new premier in Jim Prentice for less than a year.

In fact, the right-wing Wildrose Party under then-leader Danielle Smith was expected to defeat the Conservatives in the 2012 election but bozo eruptions from Wildrose candidates scared off voters at the last moment, leaving Alison Redford the PC premier until she self-destructed.

In B.C.'s 2013 election, the Liberals had been in power for 12 years -- just a quarter of the Alberta PC period -- and Premier Christy Clark had already been in office for two years as well as deputy premier from 2001 to 2005.

Second, the defection of Smith and other MLAs to the PCs looked brilliant at first but actually sewered both parties, especially after PC members in Smith's riding rejected her as a candidate.

It smacked of opportunism and entitlement, and also left Wildrose with only a few remaining, shell-shocked MLAs and a new, little-known leader, Brian Jean, with no seat in the Legislature -- ruling it out as an alternative government to many.

And that meant the Alberta NDP was the only option for those tired of Tory rule.

Conversely, B.C.'s opposition NDP had no such soap opera and has been either the official opposition or government party since 1941, including its predecessor, the Co-operative Commonwealth Federation until 1961.

Third, Notley had a caucus of just four MLAs when the election began and had never been in a cabinet; Albertans clearly were willing to overlook legislative experience completely and risk learning on the job in order to get rid of the Conservatives.

By comparison, BC's NDP had 36 MLAs going into the 2013 election, many with experience in government and years in opposition to prepare them as a ready alternative -- but B.C. wasn't willing.

Fourth, Alberta's strong right-wing split into two parts -- PCs and Wildrose -- many years ago, leading to an NDP chance to win power. Many Alberta NDP MLAs won their seats with 40 per cent of the vote or less due to PC-Wildrose splits.

B.C.'s right-wing remains coalesced in the BC Liberal Party, having successfully dispatched the BC Conservative Party attempt to play a major role under then-leader John Cummins prior to 2013.

Fifth, Prentice brought in an extremely unpopular Alberta budget and then made himself even more unpopular with a series of gaffes, like telling voters to "look in the mirror" when asking why the province was in economic trouble.

Oil rich Alberta ran six consecutive deficit budgets and even though Prentice's budget projected a $248 million surplus, it would turn to deficit in 2015 due to falling oil prices. And taxes went up for consumers but not corporations.

By contrast, the BC Liberals eked out a balanced budget once again -- albeit by a fire sale of government property -- but a fire sale is better than the firestorm Alberta's finances caused.

Lastly, Notley, whom I know from her past role at the Health Sciences Association of B.C. and the BC NDP government, is an incredibly impressive person who clearly connected with Albertans to overcome fear of the NDP.

But Notley's success cannot be attributed solely to her great leadership and the excellent campaign run by BC NDP veteran Gerry Scott.

The Alberta NDP victory truly required an amazing alignment of the political planets to happen -- B.C.'s NDP will need a different strategy if they are to thank their lucky stars after a win in 2017.