Truck nuts, Bumper Balls, Trucksticles. For the uninitiated, these simulated plastic scrotums are designed to decorate the discerning trailer hitch. Available online for $26.95, they have become ubiquitous in Alberta's oil patch. They are also strangely emblematic of why Alberta is broke. Because in order to wrench resource wealth away from companies who would obviously like to keep those billions for themselves, you need real nuts -- not the store-bought variety. 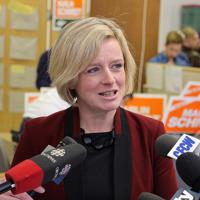 Alberta kept a mere $4.38 per barrel of oil in 2013. That same year our neighbours in Alaska managed around $38 while Norway raked in over $80. Why has Alberta given away this resource so cheaply? Because we have been led to believe that this is best we can do.

I live in British Columbia and we have fared little better than our Alberta cousins. B.C. is home to some of the most valuable timber in the world. Since 1940, some 4 billion cubic metres of it has been carted away with a current market value of close to half a trillion dollars. What do we have to show for it?

Canada remains the second richest country in the world based on per capita resource wealth, yet for some reason we can't afford postal delivery. The root of this endemic Canadian problem is fear. Fear that companies will pack up their capital and go elsewhere if we drive a harder bargain or claim more control over this incredible endowment.

Failing to capture reasonable resource rents has other important costs like excessive rates of extraction, enfeebled public oversight and impoverished public institutions. Of course Canadians should have a vigorous debate about what to do with increased resource revenues if we ever made it happen but hopefully everyone can agree that leaving billions on the table is simply foolish.

Negotiating resource rents is no garden party and understandably companies are playing to win. This is particularly true in Canada where some $33 trillion in petroleum and timber are at play. While Canadians are typically unbeatable on the hockey rink, realizing a fair return for our remarkable resource bounty is one game where we have got our clock cleaned since Confederation. The situation in Alberta is so far gone that people are starting to rightly ask where all the money went.

At the risk of additional Norwailing, it is worthwhile noting that Alberta has so far extracted $500 billion more petroleum than Norway, even at today's depressed prices. Yet Norway has $1 trillion saved, an amount that was growing by $1 billion per week before oil prices collapsed. Alberta will be $30 billion in debt by 2020, not counting the moribund Heritage Fund that has not seen any oil revenue since 1987.

Does Norway have a problem attracting investment? Hardly. Even the conservative Fraser Institute has acknowledged this, noting that Norway is the third most attractive jurisdiction in the world for oil investment. This is in spite of taxing oil profits close to 80 per cent.

But as evidenced by recent remarkable developments, Albertans are growing a pair. After decades of believing that we could do no better than the status quo, voters seem poised to toss out a political dynasty that has squatted over power for forty years.

Of course, the Conservatives and their oil company backers are amping up the fear factor as they look at the stunning poll results.

But it seems that Albertans are fed up with being afraid. The Calgary Herald just published a measured assessment of what an NDP government might mean for the Wild Rose province. After Rachel Notley met with the editorial board, Alberta's largest daily concluded she is not nearly as scary as some vested interests would like you to believe.

Likewise Alberta voters are undergoing the personal transformation of not merely voting for another party but being openly proud of it. As articulated in a fine piece of election reporting by Samantha Power, this psychological sea change seems to be picking up steam across the province.

What are the implications for Canada? Alberta has, in many ways, become the economic and political centre of the country. The free-market tax-cutting worldview that has become such an inarguable failure in Alberta has migrated to Ottawa where the Harper government has slashed government revenue by more than $45 billion per year. Finance Minister Joe Oliver even joked that our grandchildren should be left to deal with enfeebled future finances from his recent budget.

Harper himself has made fear a defining feature of his government, stoking terror about everything from terrorism to a carbon tax. But what if Canadians stopped being scared? What if Canada -- as Norway has so profitably done -- called the bluff of extractive industries that have feasted on our resources? It would have been hard to imagine just a month ago but Alberta may be the pivot point in this national transformation.

A progressive government has not been seen in Edmonton since the days of Peter Lougheed. He and his cabinet courageously went toe-to-toe with powerful oil interests 40 years ago, raising resource rents and creating the iconic Heritage Fund. Capital did not flee, although of course they threatened to. Billions were saved for the benefit of future Albertans, inspiring Norwegians to set up their own oil fund 15 years later.

But somewhere along the way we lost our nerve. Truck nuts replaced real ones while companies carted away the lion's share of the oil wealth. Whether or not the government changes on May 5 remains to be seen but the fact that it's even a possibility shows that Albertans are once again finding their courage. Cast off your plastic bumper balls Alberta -- the whole nation is cheering you on.