Edward Albee could write a new play: Who's Afraid of Elizabeth May? 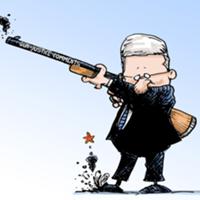 Look Out! It's the Right of the Living Dead

Answer: Just about every political leader and the Big Kahunas of Canada's corporate media. Who's not afraid of her and, in fact, wants to hear more from the leader of the Greens? Canadians. They've told pollster Frank Graves they want May included in the TV debates in 2015.

At first blush, the political resistance to including May is hard to understand. No current MP or party leader shines more brightly. Her fellow MPs have voted her the best parliamentarian, best orator and hardest worker on the Hill.

She's tied with Thomas Mulcair as the leader respected most by Canadians at 47 per cent.

No one has tried more valiantly than May to bring a measure of unity to the progressive side of the political spectrum (Liberal Joyce Murray and Nathan Cullen of the NDP deserve to take a bow too).

More importantly, May has fought all the good fights with great eloquence and grace, against a crude, thuggish government that is rapidly dismantling Canadian democracy. (The latest anti-Harper button being shopped on the Internet is the back of a nickel featuring an image of a barfing beaver and the caption 'Heave Steve.')

May fought like a lion against Harper's Parliament-destroying omnibus legislation. Why is this type of legislation fatal for any representative democracy? Four simple words tell the tale: Government spending goes unverified. Thank you, former Harper information commissioner Robert Marleau. In their zeal to maintain the fiction that Steve is a politician like any other, most mainstream journalists have utterly ignored those words. Harper is a wrecking ball for democracy -- and there's no kinder way to put it.

May also came up with wise amendments to the government's ''Fair'' Elections Act, a creepy piece of legislation which will make cheating easier and actually work to suppress the vote. Catching ballot bandits will now be next to impossible. Nor will Canadians know of their attempted crimes unless they lead to charges. Under the provisions of this cynical and regressive piece of legislation, there will be no more robocalls warnings issued by Elections Canada.

May was the first party leader to come out against Harper's latest eruption of Darth Vaderism, Bill C-51. If you believe that removing civil liberties and lowering the threshold for police state tactics makes us safer, this is the bill for you.

The Tories denied May the right to speak about the government's plan to expand Canada's war with Islamic State into Syria without a plan and without a costing. I guess they prefer to listen to Defence Minister Jason Kenney's lies and obfuscations. That's what Harper specializes in: a democracy where he and his puppets always have the floor, and the rest are reduced to Lilliputians quivering in forelock-tugging silence.

No one has paid a dearer price for opposing Stephen Harper than May. She told me once that the Prime Minister had a visceral hatred of her despite her trips across the floor of the House of Commons to hand-deliver the odd birthday card. May practises universal civility, while those on the government side typically offer the back of their hand in our increasingly dysfunctional Parliament.

May also saved Harper's bacon once when he made a crude remark at an official dinner with May sitting close by. When the PM noticed that the organizers had separated spouses in the seating arrangement -- and that someone other than Laureen was sitting opposite him -- Harper quipped, ''What's this, wife-swapping?''

'Well, if it is Prime Minister, you couldn't trade up,'' May replied. ''Laureen looks beautiful tonight.''

Shortly after May's hip replacement operation, when the Green Party leader was sporting a cane, she was waiting for an elevator on the Hill. She was refused entry -- cane and all -- because that elevator was ''reserved'' for just one passenger and he wasn't sharing: Prime Minister Stephen Harper.

Maybe the aversion to unmuzzling May comes down to just this: No one is anxious to share a podium with this formidable, articulate woman who is a lawyer, a minister and an environmentalist with world-class credentials. But the whole question of May's status in the debates is critical now, because an election will soon be upon us -- perhaps as early as this summer.

The fact that Canadians want to see May might have much to do with whether she makes it to the TV debate -- or it might not. The Green Party has been treated atrociously by other participants in the nationally televised debates, as well as by the so-called 'consortium' that organizes them -- the CBC, Global, CTV, Radio-Canada and TVA.

The consortium has enormous power, all of it discretionary, none of it codified. It decides which leaders get to participate, the format, the number of debates, the questions to be asked and the issues covered. It answers to no one. In his memoirs, former Prime Minister Paul Martin reports being told by the consortium there would be questions on international affairs and the environment. In four debates, there were none -- and Martin was never informed.

Now hear this: The consortium itself has no clear rules or criteria to guide its decisions. Worse, other parties have maneuvered secretly to keep the Green Party out in past debates. A total absence of rules and hidden political machinations to create an Old Boys club of the debates is not a confidence-building combination.

Consider the history. In 2006, the Green Party under Jim Harris ran candidates in every riding across Canada and garnered more than 660,000 votes. That qualified the party for the per-vote subsidy, which Stephen Harper has since cancelled.

Things looked good for the Greens going forward. May, the new leader, was approached by the broadcast consortium in early 2007 for a meeting. Tony Burman of CBC News wanted her to provide some criteria that would allow the news directors to include the Greens in the next national debates.

May suggested a few criteria for party participation, including having a full roster of national candidates and at least three or four per cent support in the polls -- both of which the Green Party had. Burman stressed that having a sitting MP was not a ''rule'' for participating in the debate, but a ''media folk tale.''

But what May didn't know is that the consortium then asked the Conservative party how it felt about including May in future debates. As she wrote in her book Losing Confidence, ''The Consortium was told in January 2007 that if I was included in the debates, Stephen Harper would refuse to participate.''

Harper had tried to veto the Green Party's participation from the shadows. It almost worked. May was told by Mike Duffy -- not the consortium -- that she was out of the debate. According to Duffy, then at CTV, three out of four party leaders had nixed her participation. The networks had disgraced themselves caving in to politicians like Harper.

It was an outrageous decision. After all, back in the 1988 election, the old Reform Party garnered one-third the number of votes that the Green Party did in 2006. One Reform member was elected in a 1989 by-election. On that basis, Preston Manning, who did not hold a seat, was invited to participate in the 1993 debate. Reform had a major breakthrough and won 52 seats.

As for the Bloc Québécois, it has participated in each federal leadership debate -- even though the party only runs candidates in Quebec and, consequently, only Quebecers can vote for it.

May can't participate? Neither should we

In 2008, public outrage over the wheeling-and-dealing that kept May out of the debate reversed the consortium's decision. Both the Conservatives and the NDP withdrew their objections to the Green Party's participation. May attracted nearly a million votes in that election.

But nothing is forever in politics. By 2011, the consortium rejected May's participation, citing the non-rule that the Greens did not have a sitting MP. The Green vote went down to under 600,000. So you can see why other parties might like to keep Elizabeth May off Canadians' TV sets.

Any political leader who truly cares about democracy, the environment and women's rights shouldn’' be back-rooming Elizabeth May out of the 2015 debates. They should be serving notice to the consortium that if May does not participate, neither will they.

Otherwise, Canadian democracy comes down to a barfing beaver.