"In order to spread fear and thus advance its political goals, a terrorist organization needs the media." -- Transnational Terrorism, Security, and the Rule of Law report . 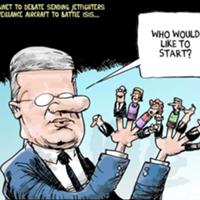 After yet another gruesome video showing the beheading of a Japanese hostage Saturday by the Islamic State of Iraq and Syria (ISIS) and new threats to Canada on Monday, it's time to stop giving them free publicity -- by turning off television terrorism.

ISIS is a barbaric group that has gained astonishing media coverage by kidnapping and then videotaping innocent victims begging for their lives.

The hostages' families then make tearful pleas -- also on television -- for their release and to show mercy, which has sadly not happened but no doubt further encourages the murderers as they gain even more publicity.

News coverage has made ISIS internationally feared -- almost solely for successfully manipulating media to cover them engaging in acts of extreme cruelty.

The menacing, knife-wielding, British-accented terrorist nicknamed "Jihadi John" who makes video demands and has previously overseen the beheadings of American and British hostages is now one of the world's most wanted -- and famous -- people.

But there is a way to dramatically reduce the insidious success of ISIS.

All media -- print, radio, online but especially television -- should refuse to give these evil criminals the enormous publicity they obviously want and thrive on.

Certainly I do not argue that kidnapping, death threats or beheadings should not be reported -- they should.

But if media voluntarily stopped broadcasting the ISIS videos, quit publishing the horrific pictures of victims supplied by ISIS and refused to give ISIS what it desperately wants -- free, horrifying publicity -- it could dramatically reduce the value of kidnapping and killing foreigners.

There are issues that need to be discussed in the western world about the root causes of terrorism.

Without doubt the American military's use of remote assassination of terrorists -- and sometime civilians -- through drone attacks provokes responses.

Canada has also thrown its military into anti-ISIS action in Iraq -- perhaps justifiably but with potential consequences, such as the murderous attack on Parliament Hill by a mentally disturbed gunman.

And new ISIS threats issued Monday claimed that "what lies ahead will be worse -- with Allah's permission" after praising the Ottawa attack and recent others in Australia, France and Belgium.

And there should also be debate about the West's ongoing support of a Saudi Arabian monarchy that beheaded over 70 convicts itself last year -- including for non-violent offences -- and allegedly engages in the torture of political prisoners, as reported by Amnesty International.

Such as the flogging of blogger Raif Badawi with 1,000 lashes over several weeks for the prisoner of conscience's "crime" of setting up a website for public discussion and accusations of "insulting Islam." Badawi also has been sentenced to 10 years in jail and fined US$266,000.

"The flogging of Raif Badawi is a vicious act of cruelty which is prohibited under international law," said Said Boumedouha, Amnesty International's Middle East and North Africa deputy director.

It also bans women from basic rights like showing their hair or faces in public or driving a car.

More ominously, Saudi Arabia is known as the primary exporter of extremist Islam -- and Osama Bin Laden was its most prominent exile.

But Saudi Arabia is our "ally" and supplies massive amounts of oil to the west.

So there is an urgent need to get beyond the instant media coverage of the latest horrible act by ISIS and look at the broader picture of what is happening in the Middle East and why.

But no cause can possibly justify kidnapping and then obscenely killing foreigners simply to terrify the world.

"Terrorism is theatre," Brian Jenkins noted back in the 1970s.

With that theatre designed for broadcast, author Bruce Hoffman argued in his 2006 book Inside Terrorism, "The media responds to these overtures with almost unbridled alacrity, proving unable to ignore what has been accurately described as 'an event... fashioned specifically for their needs.' "

So news organizations need to acknowledge their role, turn off the cameras and change the channel on ISIS's ability to so easily manipulate the media for its own terrible ends.