Kinder Morgan has been on my mind a lot lately and, when I woke up at four o'clock Friday morning, it was there, waiting: an 800-pound gorilla with greasy hair that lumbered across the border from Texas and is squatting now on Burnaby Mountain -- close enough to crowd me out of bed. Gorillas are lousy sleeping companions at the best of times, and this one doesn't sleep. Who has time when one's stated goal is to ''continually leverage our large footprint of assets and actively pursue expansions, joint ventures and acquisitions so that we can further increase... distributions and... dividends.'' 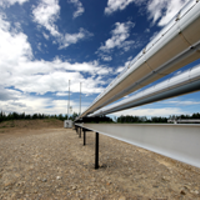 As Pipelines Expand, So Do Fears of Clearcuts, Spills

Kinder Morgan, whose lightning bolt logo appears to have been borrowed from the forehead of Harry Potter, is so good at leveraging its gorilla-sized ''footprint of assets'' (and exploiting loopholes) that, in just 20 years, it has risen from the ashes of Enron to become not only the largest natural gas pipeline and storage operator in North America, but the largest independent transporter of refined petroleum products, and, according to its website, the largest transporter and marketer of CO2.

Today, the Houston-based multinational claims more than 11,000 employees and a ''combined enterprise value'' of 125 billion dollars. In other words, Alberta's oilsands, the Trans Mountain pipeline (publically held by BC Gas until 2005), and Canada in general, are little more than rounding errors in Kinder Morgan's gargantuan scheme of things. This is the gorilla sitting on Vancouver's doorstep, wanting to bore a hole through Burnaby Mountain.

No wonder I couldn't sleep.

Finally, at 4:30 a.m., I got up, feeling like a small and impotent handwringer in dire need of some coffee. But I wasn't the only one who was having trouble sleeping. Emails and Facebook posts, not half an hour old, were exhorting me to go to Burnaby Mountain where 26 protesters had been arrested, their camp dismantled, and drilling equipment trucked in during the night. Reinforcements were needed. There was talk of critical mass, invocations of Clayoquot Sound.

They say activism is born of discomfort and mine has been building for years -- ever since Prime Minister Stephen Harper gutted the NEB's regulatory process in that infamous omnibus bill; ever since hearing about Kinder Morgan's plan to triple the Trans Mountain pipeline's carrying capacity of diluted bitumen, every drop of which will pass through the most densely populated region in Western Canada.

And for what? Currently, the Trans Mountain system generates profits of about 170 million dollars a year for Kinder Morgan, only about $1.5 million of which stays in Canada as tax revenue. All that toxic dilbit; all that risk to our water, land and air, and the benefit to B.C. won't even pay for a house in Point Grey. Sexy, nine-figure promises have been made about post-expansion pipeline revenues, but why on Earth would anyone believe them after the bill of goods we've been sold by a prime minister who refuses to face the facts of climate change, and who indulges foreign oil companies like a colonial governor handing out fur concessions?

I am angry at the gorilla but I am angrier at the government that invited it into our home. On Friday morning, as I layered up and donned my raingear, I really believed that those 26 arrests, and the tireless, truth-to-power integrity of Burnaby's mayor, Derek Corrigan in the face of the NEB's sham and shambles of a consultation -- not to mention the brazen temerity of a foreign company taking Canadians to court with SLAPP suits -- would motivate a groundswell. I thought there would be hundreds of frustrated insomniacs up there, rain or no rain.

In the end, there were only about 50 of us, but what we lacked in quantity, was made up for in quality: the words spoken at the rain-sodden press conference that morning by a multi-generational group of tribal and community leaders were lucid, impassioned and damning of a deeply flawed process, and the eight subsequent arrests were models of choreographed restraint. Even when trucks were blockaded and police hauled people off, there was virtually none of the pushing, shoving and hurled abuse that marred the previous day of protests.

As I write, there is a drilling rig just down the road from the Horizon Restaurant, preparing to dig test holes six inches wide and 250 meters deep. But there is also the city of Burnaby's pending legal challenge against Kinder Morgan's work. And between them, peaceful and steadfast, are the citizens who remain on Burnaby Mountain, staring the gorilla in the eye.