Far from Victoria or Ottawa, on a remote and wildly beautiful lake in central B.C., a remarkable event took place recently that might have historic importance in the future of Canada. The Tsilhqot'in National Government announced the creation of the Dasiqox Tribal Park, covering an area larger than half of Prince Edward Island. It follows a landmark decision by the Supreme Court of Canada in June recognizing Tsilhqot'in aboriginal title to their traditional territories. 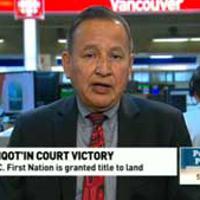 Tsilhqot'in Nation Gives Canada a New Chance to Do It Right

While many details need to be resolved around what activities would be allowed within the park, it is clear the Tsilhqot'in now intend to drive decision-making in their traditional territory.

Chief Russell Myers Ross said the park declaration is a departure from past reactive land-use fights, and an effort to square the legal rights articulated in the Supreme Court decision with future land-use planning. "We have to acknowledge that there's been an infringement on aboriginal rights by the land use and management planning done by the province.... [The park declaration] is about trying to wipe the slate clean and design something that works so we don't end in resource conflicts in the future."

According to Tsilhqot'in tribal chairman Chief Joe Alphonse, the park is "an initiative that invites all parties to look at ways of working together creatively, but being mindful that Tsilhqot'in values ought to be respected first and foremost."

The land use implications of the park will ultimately be resolved in the treaty process and the specifics of any agreement are likely years away. However, the park seems an effort to create a proactive resource management plan consistent with Tsilhqot'in values and their newly established legal rights. The Tsilhqot'in are soliciting input on the management plan for the park with local interests and the B.C. government until March 31, 2015.

While the event may have game-changing implications for resource development in Canada, it was remarkable that the only media organization in attendance was The Tyee.

'This is our church'

In gratitude for the Tsilhqot'in legal victory with its wide-ranging implications for First Nations throughout Western Canada, master carver Tim Paul and the Hoomis family gifted a totem pole.* The site chosen for the park announcement by the Tsilhqot'in was not without significance. Fish Lake, known as Teztan Biny to the Tsilhqot'in, is the site of the bitterly contested Prosperity Mine proposal by Taseko Mines Ltd.

Two separate proposals by Taseko Mines at Fish Lake have been rejected through the federal environmental assessment process. Taseko is contesting these rulings in federal court. While the current mine project seems in doubt, the legal conflict continues.

"This is our church," said Alphonse to a gathering of several hundred band members and supporters on the shoreline. "That island out there is where our spiritual people would go to get their strength, their power, their vision. Taseko fought us. To add insult to injury, they ran one of their drills right in one of our pit houses.... This is our place of worship and our place of prayer." 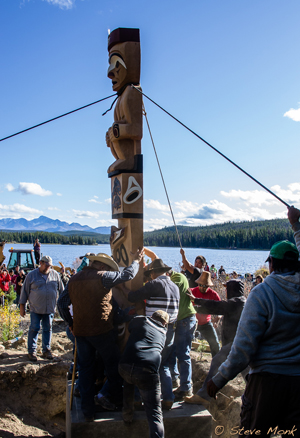 While the Tsilhqot'in stressed the tribal park was a proactive effort to avoid such conflicts in the future, the raw resentment of First Nations due to past clashes with the government was not far below the surface.

Tim Paul recounted a grim account of a respected Nuu-chah-nulth elder who was wrongfully executed by the B.C. government in the 1800s. "He was hung for no reason at all, but for being in his homeland. Because of resources. Because of the fur trade. His trial lasted no more than five minutes, and he was found guilty. Gallows were built in one of our homes and that's where he was hung in front of his family."

The Tsilhqot'in have their own bitter memories of resources, violence and cursory justice. In 1864, five of their chiefs were hung in Quesnel after a shooting war with those seeking to build a road from Bute Inlet to Barkerville during the Cariboo Gold Rush. The B.C. government recently apologized in the legislature for these wrongful deaths.

Both these First Nations have also seen massive extraction of resource wealth from their traditional territories with minimal local benefit. A small portion of land once occupied by the Nuu-chah-nulth roughly coincides with what is now known as Tree Farm Licence 44. Since 1985, approximately 60 million cubic metres of timber have been removed by various forest companies, which would have a present market value of about $6.5 billion.

Virtually none of that resource wealth has accrued to the Nuu-chah-nulth people, who recently won their own Supreme Court of Canada victory to reacquire their ancient fishing rights lost during colonization.

The territory occupied for thousands of years by the Tsilhqot'in people is included in what the B.C. government calls the Williams Lake Timber Supply Area. Since 1981, about 140 million cubic metres of logs have been removed by forest companies worth about $8.3 billion in 2014 dollars, again with virtually no net benefit to local indigenous people.

The Tsilhqot'in halted much of the logging happening on their traditional territories through the legal challenge recently resolved at the Supreme Court, which contested provincial cutting permits dating back to 1983. They have also been waging a fight against Taseko Mines for over 10 years.

The Tsilhoqt'in are using their recent Supreme Court victory as an opportunity to end these protracted land use disputes by essentially declaring resource sovereignty over an area that bounds a number of established protected areas and critical wildlife habitats.

A gift for strength

According to Chief Ross, "The totem pole represents new beginnings, charting a new vision for ourselves."

The Nuu-chah-nulth leaders at the ceremony expressed hope that the totem pole gift would give strength to their Tsilhqot'in allies in the ongoing quest for reconciliation.

"Our grandparents are going to take root here to build strong support and alliance with you, because we know in our lifetime and perhaps our children and grandchildren's lifetime we are always going to be up against Canada," said Paul about the pole he carved.

While the Tsilhqot'in and the Nuu-chah-nulth are separated by almost 1,000 kilometres of the Fraser River, their unique cultures are linked by the salmon that migrate its length and depend on a healthy environment.

They also share a painful history of the residential school system and being denied access to the resources they depended on for millennia. And they share a determination that their ancient cultures rooted in the land and their language will carry them through the challenges to come.

*Correction: The totem pole was gifted by master carver Tim Paul and the Hoomis family, not the Nuu-chah-nulth First Nation as first stated in this article. The Tyee regrets the error.