If, as the Booker Prize-winning Nigerian writer Ben Okri has said, "stories can conquer fear," then surrender all hope ye who enter the traditional territory of the Heiltsuk people without a good story to tell, or the humility to hear one of theirs. 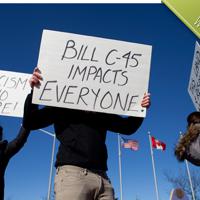 Eight Ways to Take Part in Idle No More

"Our stories matter," said Jessie Housty, curator of the Thistalalh Memorial Library which, phoenix-like, has risen from the ashes of 4,000 books that burned last summer in a catastrophic fire that consumed the library, an associated non-profit office and gift shop, and Bella Bella's community grocery store.

Today, the library reopens under the approving eyes of B.C.'s lieutenant-governor Judith Guichon and representatives of the modular home company Britco. Britco's Community Literacy Initiative provided a new home for the Thistalalh library and it now offers a spectacular view of the ruffled waters of the Inside Passage.

The donation of the building, and of the thousands of books that poured into Bella Bella since word of the fire spread last year, is "a really neat affirmation that the outside world is aware of us and cares about what we are doing," Housty said.

Before the fire, I spent time last year looking over the eclectic collection -- old and new from near and far -- that Housty had corralled. It was a serious assembly, properly catalogued: fiction, non-fiction, a bias towards environmental and First Nations issues, leavened with the likes of Curious George and Clifford the Big Red Dog shelved at floor level.

One of the things that stood out was a collection of signed first editions from some of the leading literary lights of "the outside world."

"To Jessie, for creating her library," wrote Salman Rushdie in a copy of The Enchantress of Venice. "To Jess and the Thistalalh library, an inspiration to the nation," wrote Wade Davis in Into the Silence. "For Jessie, all good wishes," wrote Michael Ondaatje afront his book of poems, Handwriting. Salutations, too, from Margaret Atwood, Ian McEwan, Miriam Toews, Chimamanda Ngozi Adichie, Kazuo Ishiguro, Roddy Doyle, Sebastian Barry, Graeme Gibson, Ann-Marie MacDonald... and so on.

After the fire, Housty salvaged what she could of that collection, drying the signature pages so they could be pulled out and put on display as keepsakes.

More than a library, a safe house

But more important than the affirmation of some of the big names of world literature is the big idea behind the library itself. "It took a lot of upfront work to build a library culture in Bella Bella," Housty said, reflecting on the slow community uptake when the library opened in 2007.

The library's opening coincided with a growing spirit of responsibility and resistance not just in Bella Bella, but among coastal nations more broadly. Along with all the books in the old library there were black hoodies for sale, emblazoned with the slogan "Heiltsuk Nation Opposes Enbridge" and a depiction of a First Nations mask, albeit with a tanker poking out where the tongue would normally be. There were posters on the walls painted by Heiltsuk kids: "Our Territory, Our Choice." "Go Away Bad Tankers." "Thanks Enbridge, You Really Brought Us Together."

The library became a kind of safe house for community conversations about Enbridge and much more. It was co-located with the Qqs Projects Society, which Housty serves as communications director, and where groundbreaking Indigenous-led conservation planning and community development strategies hatch easily within a culture of good old-fashioned environmental activism.

Bella Bella, you may recall, is a place that the National Energy Board deemed too dangerous to visit for a scheduled community consultation in 2012 regarding Enbridge's Northern Gateway pipeline project. True, the Heiltsuk had mounted a peaceful protest in advance of the NEB panel meeting, and apparently that was enough to make the NEB surrender all hope. Or maybe they caught sight of a picture on Facebook of Jessie the warrior princess, dripping with molasses to dramatize the effects of spilled oil on marine life.

In addition to her work with the library and with Qqs (the word, pronounced "kuks," is the Heiltsuk word for "eyes" and symbolizes the Heiltsuk's watchfulness over their territory), Housty, 27, is an elected band councillor, a Heiltsuk representative on the board of Coastal First Nations, a key campaigner against trophy hunting with Bears Forever, a practicing if unaccredited ethnobotanist, and at the University of Victoria, a master's student studying ethnography in medieval travel literature. (She also contributes to The Tyee.)

The library, she said, goes a long way "to undo the geographic isolation" of a community where the only access is by boat, plane or ferry. It is a place "for Heiltsuk people to have access to the stories of other places," which, especially when it comes to defending Heiltsuk territory from unwanted developments like Northern Gateway, sparks discussion, debate, and a sense that the Heiltsuk aren't alone in their struggles.

Mostly, though, the library is "a gathering space around stories," Housty said. "Stories are sacred things. As Heiltsuk people, we really are nothing more than the sum of the stories we have lived in."

When the library opens today, there will again be about 4,000 books, this time on shelves made of cedar harvested in Heiltsuk territory, milled locally by Heiltsuk people. Housty shudders at the suggestion that people might donate more books, admitting that, in the absence of a way to recycle them, she actually burned a few piles of trashy romance novels that descended on the community last year. That said, the collection could use some more First Nations and environmental titles. Donations of money would enable Housty to buy specific titles and maybe even hire someone to run the library part-time, or cover the cost of post-secondary textbooks for Bella Bella high school grads. (Donations to the library can be made via the "Library Rebuilding" drop-down here.)

If you believe, as Ben Okri has said, that "stories can conquer fear," then you might care to know how he ends that thought. Stories, Okri says, "make the heart bigger." The Heiltsuk are big-hearted people, hungry for stories of the outside world and willing to share their own. They've built and rebuilt their library at the edge of the world with the gifts of strangers. In return, they offer the world their courage to stand up for the place from which all their stories emerge, and to which all their stories return.