"When will mankind be convinced and agree to settle their difficulties by arbitration?" -- Benjamin Franklin, writer, politician, inventor, 1706-1790 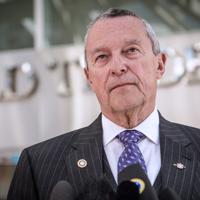 Not a Yes, Not a No: Education Minister Wary of Arbitration

Don't believe the reasons Education Minister Peter Fassbender and Premier Christy Clark give for their rapid rejection of binding arbitration to settle the teachers' dispute. This is the game changer.

Dismiss their contention that the BC Teachers' Federation's demands for wages and benefits is the reason they can't go to binding arbitration. It isn't.

The BC Liberals do not fear arbitration could give teachers more than other public sector workers. They know it won't.

Any arbitrator will award teachers the same wage increases as other government workers -- 5.5 per cent over five years, plus some compensation for not receiving any wage increases for years when other employees received modest raises.

The government is scared school-less that the B.C. Supreme Court decision restoring class size and composition clauses -- illegally stripped from the BCTF contract by Clark and former premier Gordon Campbell back in 2002 -- will be upheld by the B.C. Court of Appeal and/or the Supreme Court of Canada.

The true reason the government rejected binding arbitration? It doesn't want to spend money on putting more resources into classrooms for students with special needs and reducing class size.

It's a harsh reality, but the evidence is clear. And if parents and others want kids back in school before November, they must loudly demand the government accept binding arbitration while letting justice take its course.

First, while wages and benefits are a major cost item, they are also budgeted. The government anticipated there would be a salary increase for teachers, and allocated that amount in this fiscal year and the following ones.

Third, despite this government going recklessly into deep debt -- from $33.8 billion in 2001, to $45 billion when Clark became premier in 2011, to $61 billion now -- it doesn't want to invest in education, only buildings, bridges and liquefied natural gas.

Those investments are worthy and help pay for public services, but in the long term we also need better-educated workers participating in all sectors of the economy to prosper.

Judging from some media and other commentary, the teachers' union has failed to convey the message that wages and benefits are not the problem by not removing some of those bargaining package items much earlier.

But that doesn't matter now, because an arbitrator can decide them.

In addition, claims by the B.C. government that it has been stung by arbitrated wage settlements in the past, primarily with doctors, are a red herring.

In that arbitration, doctors argued their compensation had fallen dramatically behind their counterparts in Alberta.

But in the teachers' dispute, where all other public sector provincial government workers have taken the same wage increase, an arbitrator will undoubtedly follow that pattern.

Arbitration has worked before

Teacher arbitration wouldn't break new ground in B.C., either. In 1993, the New Democrat government brought in legislation to end a local teachers' strike in the Vancouver School District through binding arbitration.

Then NDP Premier Mike Harcourt outlined the arguments succinctly in the B.C. Legislature:

"In recent days the government, through the Minister of Labour, has made significant efforts to assist the parties to the dispute in Vancouver in resolving their difficulties. A mediator was appointed by government.

"That mediator was then designated as a special mediator. There was a full and public release of the recommendations of the special mediator and, finally, an invitation to both the school board and teachers to agree to voluntary binding arbitration.

"The Minister of Labour, to his credit, has fulfilled his responsibilities by exhausting all of the possibilities that could lead the parties to an agreement.

"It became evident on Friday that bargaining in the Vancouver district was paralyzed and that our children were paying the price. Only through the actions of this government could I ensure that the children in Vancouver would be back in school tomorrow.

"This bill takes clear action to end the dispute in Vancouver and get those students back to school. It also ensures the expeditious resolution of the other outstanding disputes."

Today's BC Liberal government still has two viable choices: negotiate a deal on class size and compensation as well as all other issues, or let binding arbitration and the courts decide.

But so far it has proven unwilling to go either way, preferring a lengthy strike that might end with a legislatively imposed contract rejected by teachers.

That would likely mean an illegal strike, more court confrontation, additional classroom disruption and abysmal morale for teachers and students.

Surely neutral third party arbitration and the justice system are a better alternative?