"I think Mr. Tieleman should get out of downtown Vancouver before he claims there is no poor quality land in the ALR." -- Minister Bill Bennett in an April 9 Facebook comment 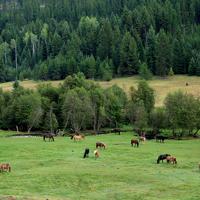 Not every column critical of BC Liberal government policy gets a direct online response from the minister responsible -- or sees that comment later removed from the minister's personal Facebook page.

Nor does a prominent BC Liberal supporter usually openly attack that policy online.

Receiving a colourfully-worded call from the minister on a Sunday night in response to email requests for an interview, however, is most unusual of all!

But that's what happened after I wrote about cabinet Minister Bill Bennett's controversial plans to radically change the Agricultural Land Reserve in last week's Tyee column.

The straight-shooting Bennett, who introduced legislative changes to make it easier to remove property from the Agricultural Land Reserve in the Interior, the North and the Kootenays as part of the government's "core review" of operations, didn't like the column.

Reader Jan Halvorson posted a link to that column on Bennett's Facebook page, asking his views about "increasing population while decreasing ALR."

Bennett told me Sunday the post later disappeared because "it probably means that I got rid of somebody" -- meaning he unfriended them.

Regardless, Bennett was clear that he decided to change the ALR because he has been "listening to his constituents for 13 fucking years!"

Bennett may be particularly sensitive because he also got blasted on Facebook by Bill Eggert, owner and winemaker of award-winning Fairview Cellars winery near Oliver, B.C.

Eggert not only knows the Agricultural Land Reserve, he's a BC Liberal supporter -- and not happy with the government's changes.

Eggert wrote: "Love you Bill, but damn it, I can't be onside on this one. Farmland is farmland Bill... I worry how this will fall out with the party.

"No one has done well that went after the ALR. I have no illusions. I know why this is happening. I get very nervous when cabinet ministers with a legal background are discussing the merits of farmland.

"This issue is the Achilles heel of this party. You don't have a good record. I won't drag up the past, but you know what I'm talking about," Eggert concluded ominously.

Bennett continued on Facebook: "The irony of this debate is that the changes to the legislation will not help nor hinder use of 'agricultural land.' It will only help where the land is in the ALR and is not 'agricultural land.' Those who do not believe need only drive thru the EK with an ALR map in hand. It would be a conspiracy-busting experience."

Eggert fired back: "Many have stood in front of the ALC [Agricultural Land Commission, which governs the ALR] to say this land or that was not agricultural land. Leave it up to the ALC to decide. This is not your job Bill. Leave it at arm's length."

'This is me listening to my constituents': Bennett

In my interview, Bennett strongly argued that the ALC process is unfair, despite the fact that there is a clear, simple process for removing land from the ALR and that the commissioners who decide are all appointed either by cabinet, in the case of regional chairs and vice-chairs, or by the minister of agriculture.

But Bennett thinks otherwise, blaming the legislation originally introduced by Dave Barrett's NDP government in 1974 to protect the five per cent of B.C. land regarded as agriculturally important, and saying that local people in his East Kootenay region have been ignored.

"It doesn't really address the fundamental problem in some areas of the province, which you don't seem to be aware of... that there is a ton of land within the reserve that you can't grow anything on," he said.

"And people own that land, they're B.C. citizens, lots of them vote for the NDP. The irony of this is, these are very ordinary people... whose land is no good for agriculture, and what do you do with these people? What do you tell them, that their land is sterilized forever?

"This is not my idea. This is not redneck, former lawyer, developer Bill Bennett wanting to pave over the Agricultural Land Reserve. This is Bill Bennett the MLA, listening to his constituents for 13 fucking years.

"And this is what they want me to do, so I get really upset when people say that this something other than what it is. This is me listening to my constituents -- the majority of rancher farmers who live here want us to do that. And if you want to talk to them, I'll give you their names and phone numbers."

Bennett insisted the changes to the legislation were "not a conspiracy by the BC Liberals or by Bill Bennett to pave over all the agricultural land in the Kootenays or the Cariboo or the North."

"I grew up in a farming community, my family comes from farm people, I married a dairy farmer, we grow stuff in my backyard," he said. "I'm about as rural as they get."

Why not work with the NDP?

So I asked Bennett, why not work with the NDP to find a mutually agreeable solution instead of this battle? Or is that naïve?

"No, you're not naïve, and I know you know the answer. I mean, I've read your stuff, I know who you are and I've got time for you. You're a decent guy, you drink wine and you said something borderline nice about me [on Shaw TV's Voice of BC]... and I appreciate that.

"But you know as well as I do that if we had the conversation with the NDP two months ago, three months, four months ago, all hell breaks lose and this becomes a political issue and the substance of the debate just disappears.

"You can't have a substantial, rational, non-political debate about the Agricultural Land Commission in British Columbia -- you know damn well you can't!"

I didn't disagree with that assessment, but pointed out in return that Bennett's approach isn't fostering a substantive debate either.

Bennett doesn't agree with my observation that there is a simple, straightforward way for landowners to remove property classified as within the ALR.

But the government's own Agricultural Land Commission website spells it out clearly:

"If you wish to subdivide or use your land for non-farm purposes or exclude your land from the ALR, you must submit an application to the Commission and obtain its approval.

The process isn't good enough for Bill Bennett or the BC Liberals though, even if overall land protected has shrunk by 94,795 hectares since 1974.

Bennett clearly believes what he is saying, but is his position plausible when the government already holds all the cards?

If you are concerned about the government's recent changes to the ALR, join nearly 8,000 others who have signed an online petition here.