[Editor's note: In July 2012, the British Columbia government announced five conditions which must be met before it would consider the approval of heavy oil pipeline projects. For The Tyee, independent economist Robyn Allan has reviewed the first three conditions, available here, here and here. In those examinations, Allan argued that the province has far from proven its commitment to meeting its own conditions over the years. Today, she breaks down the fourth condition, that "legal requirements regarding Aboriginal and treaty rights are addressed and First Nations are provided with the opportunities, information and resources necessary to participate in and benefit from a heavy oil project."]

At first blush, the B.C. government's fourth condition on First Nations' Aboriginal and treaty rights appears as if it might be meaningful. Under scrutiny, we find it's more about political posturing and siding with Big Oil than protecting First Nations' interests. 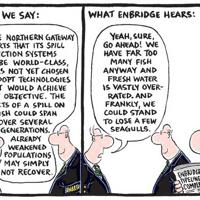 Give Us a Referendum on Northern Gateway

Instead of proactively addressing the condition after it was announced, Premier Christy Clark waited a year, and then set up an Alberta/B.C. deputy minister's working group. In October, the committee's terms of reference were released in advance of Clark meeting with Alberta Premier Alison Redford.

The terms mirror the issues laid out in B.C.'s five conditions, but instead of advancing the concerns, the public learned the two governments intended to "define next steps for developing a strategy for engaging First Nations with industry, the federal government and B.C./Alberta."

Translation: The B.C. government is planning to figure out another way to entice First Nations to embrace a bitumen export strategy, because its previous plan failed. The plan with Northern Gateway was to let Enbridge do it. Enbridge blew it.

Clark is not listening to First Nations. She does not seem to understand the power behind the March 2010 declaration of Coastal First Nations, where nine bands affected by tanker traffic emphatically stated, "oil tankers carrying crude oil from the Alberta tar sands will not be allowed to transit our lands and waters."

Or the Save the Fraser declaration where 130 First Nations signatories assert, "We will not allow the proposed Enbridge Northern Gateway pipelines or similar tar sands projects to cross our lands, territories, or watersheds, or the ocean migration routes of Fraser River salmon."

These First Nations have built a wall of unbroken opposition and will use all lawful means to stop Northern Gateway from being built. Their declarations are about lands and waterways over which First Nations have outstanding, constitutionally protected, claims. The commitment underlying them runs deep.

If Northern Gateway is pushed through without appropriate and meaningful consultation or accommodation, and one or more First Nations seeking court decisions lay claim to lands and waterways affected by the project, the consequences will be significant.

The stakes are now even higher, with the decision of the federal Joint Review Panel assessing Northern Gateway expected Thursday.

Condition four is a smoke screen for B.C. to stand behind as First Nations are forced to protect their interests -- and ironically the public interest of many Canadians -- in the courts. It will be long and messy.

The province showed its real plan for including First Nations in oil pipeline projects in its final argument to the National Energy Board Joint Review Panel in May. One paragraph in that submission mentions First Nations' rights: paragraph 152.

After monitoring the Panel process for two and a half years, releasing its conditions paper halfway through and admonishing both Enbridge and the federal government for not adequately addressing First Nations' issues, the province refused to comment on the terms of its fourth condition during final argument. It told the Panel, "The province will not be making submissions on whether the JRP process satisfied the honour of the Crown or other obligations to First Nations."

If there was an appropriate place to drive home condition four, it was at the public hearings. But the province did not register a comment about "opportunities, information and resources necessary to participate in and benefit from" Northern Gateway. It did not take Enbridge or the federal government to task for a lack of benefits, engagement, or resources.

It appears the province wants agreements on project profit-sharing in a piecemeal way to sidestep a larger issue of Aboriginal and treaty rights. Many First Nations aren't buying it. Bitumen oil pipelines threaten to eat away at the land base they are committed to protecting and undermine their broader rights.

It isn't simply about money. First Nations rely on other metrics for human progress. It's about responsibility, stewardship and decision-making. It's about deeply-held beliefs of the importance of intergenerational transfer of lands and resources and defending traditions consistent with a sustainable existence.

Much talk, no listening

Legislation passed as part of omnibus Bill C-38 took away the power of the National Energy Board to ultimately decide the fate of Northern Gateway. The Joint Review Panel can recommend the project be rejected, but it must also provide conditions under which it would recommend approval even if it believes the environmental impact is unmanageable, or the public interest will not be served.

The federal government has said Northern Gateway serves the public interest. The project will likely receive approval from Cabinet. The fix is in. Court cases will commence.

The provincial government knows it. A letter from the province to the Panel a year ago explained B.C. expects First Nations will pursue court redress if Northern Gateway is green lit. First Nations "will have remedies available to them to seek to prove their asserted rights and title interests and to advance their claim" that the project's approval is an unjustified infringement of those interests, it read.

Canadians will be led to believe B.C.'s First Nations opposed to the project are difficult. Such a demonization strategy is foreshadowed in Natural Resources Minister Joe Oliver's infamous letter about radical groups. "Finally, if all other avenues have failed, [these groups] will... sue everyone and anyone to delay the project even further. They do this because they know it can work. It works because it helps them to achieve their ultimate objective: delay a project to the point it becomes economically unviable," reads the letter.

Harper promised bitumen would not be exported to Asia when running for re-election in 2008. He said this was because of environmental concerns and the unacceptable cost to the Canadian economy from lost value added and jobs. His government continued to publicly support upgrading bitumen to synthetic crude oil in Alberta right up until Enbridge filed its application for Northern Gateway in 2010.

Then Harper changed direction. Big Oil made him. Northern Gateway is a diluted bitumen export pipeline and a condensate import pipeline. The entire project rides on exporting bitumen.

Harper may recognize his tactics and lack of meaningful government-to-government consultation are costing him. Last March, he appointed Doug Eyford as the Government of Canada's special federal representative on west coast energy infrastructure. Eyford's final report was released earlier this month.

The report urges the federal government to address the broader issues of Aboriginal and treaty rights. For any project, it reads, "developments must be environmentally sustainable and undertaken in a manner that acknowledges the constitutionally protected rights of Aboriginal peoples."

Eyford briefed Harper after his preliminary findings in June. He must not have listened. When a parade of ministers and deputies descended on B.C. earlier this summer, they met with First Nations leaders, and they talked without listening.

They are worth listening to.