Dictionaries -- loosely definable as collections of alphabetically-arranged words accompanied by their agreed-upon definitions -- have been known to humankind since 2300 BCE. Since then, they have come a long way. Tougher paper, more reliable ink, tighter binding, clearer wordage, and lately online access have made dictionary use a handy enterprise for third-graders, poets, and lawyers alike. 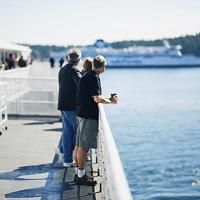 As someone who is in the business of writing I've personally found their functionality to be remarkable. So, for this holiday season I have resolved to donate a dictionary to people who seemingly can't afford one: BC Ferries and the Government of British Columbia. It's inspiring to think what they might learn. Words like:

Consultation: A meeting for discussion, debate, or decision generally held to seek advice or information, or ask for guidance.

Not a difficult word at all, but in the semantics-challenged lexical universe inhabited by BC Ferries and the BC Ministry of Transportation and Infrastructure the term consultation has seemingly taken on a different and erroneous meaning, something arguably closer to:

Consultation: 1. A schadenfreude-driven process driven by the philosophy of "shoot first and ask questions later;" 2. A mocking of the democratic and participatory process; 3. A pantomime scripted in order to outrage audiences.

Now, how can I be so certain that supposedly wise elected officials and well-paid technocrats have never been briefed on the denotations of words they so often brandish as part of their engagement strategies? Well, I am no socio-linguist but I am an islander, a so-called minor route user, and victim of the latest "consultations."

And if that weren't enough I am also a starry-eyed scholar who once was foolish enough to dedicate four years of systematic research focused on the social geography of ferry transportation on Canada's West Coast, an undertaking which culminated in a book that dissected the multiple roles played by BC Ferries in all the island and coastal communities that depend on them for their day-day survival. A rewarding and enlightening exercise to be sure, yet a futile one, in light of the fact that obviously no one at BC Ferries or in the B.C. government has bothered to read it (something which, of course, I won't hold against organizations whose members are still struggling with cracking the code of ABC).

Cuts that cut off a way of life

Dictionaries can fuel hours of educational fun. Provided a "Manager responsible for the comprehension of the principle of alphabetization and compound expressions" be available -- and given BC Ferries top-heavy bureaucracy it isn't unreasonable to think such a job title might exist -- another interesting entry might be soon located:

Social contract: 1. the voluntary agreement among individuals by which organized society is brought into being and invested with the right to secure mutual protection and welfare or to regulate the relations among its members; 2. An agreement for mutual benefit between an individual or group and the government or community as a whole.

Where is the material evidence of their derelict language comprehension -- you might ask -- and their need for a serviceable dictionary? Together with some 400 other islanders on Wednesday December 10 I squeezed into an anger-filled Gabriola Island Community Hall. Asked "to voice our concerns" lesser-ranked BC Ferries employees like David Hendry (BCF Director of Strategic Planning) and Government officials like Kirk Handrahan (Executive Director, Marine Branch, MOTI) began by watching in silence the vivid images and telling words played in this video.

Then, they attempted to tackle the dozens of irate questions and comments generated by an incandescent but despondent crowd.

"Why do you spend so much money on these 'consultations' when you won't bother listening to us?" the audience cried.

Silence. No answer, of course, due the mystifying usage of the foreign word.

"Do you feel that you have broken your social contract with us," subsequently asked Gabriola resident Tawny Maclachlan Capon.

"Well, I'm not sure what social contract means," mumbled the MOTI representative as the insulted crowd erupted, "there are many definitions."

Social contract -- over four years of fieldwork from Haida Gwaii to Saturna Island and everywhere else in between I came to a few, simple and intuitive conclusions about what that social contract consists of.

Historically, it used be that access to our islands was granted in light of waterways' highway status. Then that contract was broken without our consent.

Then it was broken even deeper by a monopoly acting as a profit-driven business in an essential service market in which a commercial enterprise is destined to both fiscally fail and to create social and economic injustice for all its stakeholders.

And now -- as people up and down the coast debate moving and selling their island homes, imposing draconian curfews on their teens, changing jobs, and increasing their credit lines -- long-established and deeply-woven-into-routines ferry schedules are slashed and burned, evidence that another social contract is destroyed and no faint understanding of this fact has emerged amongst the culprits.

Islanders are not wrong in debating a class action lawsuit over the last broken contract. Ferries, like all means of transportation, have a profound socio-economic impact on the communities they serve. An impact that is a direct outcome of the operation of at least five variables in play: cost, distance, duration of journey, speed of travel, and travel motives.

Motive: something that causes a person to act in a certain way, to do a certain thing.

Motive of travel, in the minds of BC Ferries and the present government, is exclusively that of leisure. That must be why on any given week of the year vacationers can access dozens of slot-machine-enriched getaways to pampering island chateaus and All-Aboard Breakfast-spiced packages to exotic resorts. And that's why late-night ferries to dark, spa-less communities don't mean much to these travel agents. That is why our communities are expendable. That is why BC Ferries and the provincial government can be unconcerned with the travel motives of shift workers or young families trying to get home for the day.

In my line of research we abide by a simple principle to call a study complete. The principle is called the rule of saturation.

Saturation: the point at which something has been soaked, imbued, filled up so deeply with something (like knowledge) that no further addition or increase is possible or useful.

Three years ago I reached my point of saturation after some 400 interviews. As I sat in an audience infuriated by this third expensive and insistent round of "consultation" I couldn't help wondering how anyone incapable of hearing -- let alone comprehending words -- could ever reach saturation.

"Just to make sure you're paying attention to all we've been telling you tonight," a commuter quizzed the stage, "could you repeat to us what we've been trying to tell you?"

Next a seventh-grader managed to weave its way to the microphone: "I'm curious. How much money do you people make?"

The crowd roared while the gaggle of contracted consultants, BC Ferries manager, and MOTI representative glanced at each other in dismay. They swallowed their spit and adjusted their white collars, nervously conferencing at the mound on whether they should even dare tackle the question.

"In my class we've been raising funds to buy clean water for kids who live on less than one dollar a day," the boy replied over a growingly chorus chanting "shame on you people."

Cost is a word that even children understand well. As for BC Ferries and the provincial government, well, it might need to be spelled out:

"We heard how many sailings you need to cut and how much money you need to save," another islander took to the floor as the evening wound down, "but your company is so secretive about their accounting books. Could you tell us how much each run to or from Nanaimo costs?"

"Well, you see, it's not so easy to figure out those numbers..."