Our last Tyee column argued that British Columbians are open to tax increases, and that the province would be well advised to increase revenues so that we can invest in services that improve our quality of life (such as affordable child care, seniors care and better public transit). It also needs to ensure everyone -- especially those at the top and corporations -- pays a fair share. 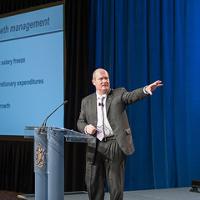 In BC, a New Openness to Tax Increases

Yet many people worry that such changes will have harmful economic consequences. We are warned that asking upper-income people and corporations to contribute more into the collective pot will cause businesses to withhold or uproot their investments, and wealthy people to leave the province or work less, leaving us with fewer jobs.

These fears are misplaced. Here's why:

Low taxes are nothing to boast about

For too long, the B.C. government has boasted about having the lowest taxes in the country for almost all individuals. This is nothing to be proud of, especially when we also have the highest poverty rate and the worst income inequality in the country. Having low taxes means we also lack the revenues needed to meet pressing needs.

And on the economic front, we've nothing to show for it. The provincial government brought in massive personal and corporate income tax cuts starting in 2001. Yet B.C.'s economic and employment record in recent years has been fairly average in Canada. In 2010, according to the last report of the B.C. Progress Board (before Premier Clark eliminated this arms-length panel), B.C. ranked fifth out of 10 provinces on economic performance, fourth on personal income, seventh on jobs, and ninth on social conditions. This was the same (or slightly worse) than B.C.'s ranking on the same indicators in 2000.

Even a recent report from the Business Council of B.C. confirms that B.C.'s economic performance over these two decades is comparable, and finds that investment in machinery and equipment grew slower over the 2000s than it did over the 1990s, when corporate taxes were considerably higher. This is because other factors -- such as the decline of the forest industry in B.C., the ups and downs of global commodity prices, and changes in the value of the Canadian dollar -- have a much larger impact on B.C.'s economy than our tax rates.

When it comes to taxes, what if we were just average?

OK, so perhaps not the catchiest of slogans; that's why we're policy analysts and not political strategists. But allow us to explain.

B.C. would be in a much better position if we pooled a little more of our collective resources through taxes and used them to invest in public services that improve our quality of life. We currently have the lowest income tax rates in the country. What would it look like if instead we were simply average?

As seen in this chart, during the 1990s, B.C. tracked the national average for personal income taxes (including MSP premiums, a deeply regressive tax that is now unique to B.C.). Since the early 2000s, however, B.C. has collected significantly less personal income tax as a share of GDP (meaning, compared to the size of our economy) than other provinces, thanks to steep tax cuts. If B.C. collected the same level of personal income tax revenues as a share of GDP as the other provinces, we would have $2.4 billion more every year. Meaning, the fiscal squeeze B.C. is currently wrestling with would be largely gone.

Indeed, $2.4 billion in additional revenues would be enough to fund: the construction of 2,000 units a year of new social housing; significant welfare benefit increases; the first phase of a universal child care plan; needed investments in community health care for seniors and people with disabilities; Ministry of Children and Family Development budget increases; an increase in post-secondary education funding; a substantial increase to environmental protection; and restore K-12 class sizes, composition and specialist teacher levels to where they were five years ago.

Our recent report Progressive Tax Options for B.C. outlines a host of options for how to raise those revenues.

Debunking the arguments against tax increases

There are some, of course, who claim that tax increases would not in fact increase revenues. They claim tax increases would stifle economic activity, and thus fail to deliver returns to the public treasury. These arguments do not hold up. Here we offer a few brief responses:

Argument 1: Increasing taxes reduces household spending capacity and presents a drag on the economy similar to cuts in government spending.

If a government were to increase taxes without reinvesting these new revenues in the province (for example, if the money were used simply to pay government debt), that would indeed be the result. But that is not what we would recommend. Rather, we argue that the government should raise revenues in order to invest in vital public programs and infrastructure. Standard economic models indicate that if new revenues are spent on public programs and capital projects (meeting pressing human and environmental needs), there is a net benefit with respect to GDP and job creation (i.e., the stimulus from higher government spending exceeds the fiscal drag caused by the tax increase).

Raising taxes on upper-income households would have little impact on the real economy as it is taxing money currently saved (via purchasing financial assets or real estate) and putting it to use building public infrastructure and services (creating employment as well as providing better services).

Taxation and income transfers that partially redistribute income and reduce the concentration of income at the top have additional positive effects on the economy. Wealthy people tend to (and can afford to) save a larger proportion of their income, invest it overseas, or spend it abroad. These uses of money represent "leakages" from the B.C. economy and reduce provincial aggregate demand. Conversely, lower income people tend to spend all their income in the local economy, which is why increasing their incomes through redistribution in the tax and transfer system provides a net economic stimulus locally.

Leading economists are now in agreement that too much income inequality is bad for an economy. Recently, the IMF, the Bank of Canada and the Conference Board of Canada have all published research reports showing that inequality can diminish economic growth and increase financial volatility, leading to economic instability. Thus, reforming the tax system to modestly redistribute more income can be positive for the economy.

Argument 2: If B.C. raises its corporate and personal taxes it will chase away investment. Higher taxes would result in capital flight and wealthy people would move away from the province, reducing tax revenues instead of increasing it.

There is plenty of room for B.C. to raise both personal and corporate taxes. While some corporations and individuals would no doubt complain loudly, and some would threaten to move, there is little evidence that reasonable tax increases would bring significant negative consequences for the province. Ultimately, B.C. is a highly desirable place to live, work and invest, with a mild climate and rich natural environment, and many are prepared to pay a tax premium for that privilege. In addition, there is virtually no actual evidence that tax increases lead to significant outmigration.

As noted above, B.C.'s personal income taxes are currently among the lowest in Canada (even for the highest income earners) and our corporate taxes are among the lowest in the country. B.C. has room to move its personal and corporate tax rates to at least match the Canadian average, and the economic "price" of such tax changes is likely to be negligible. There is nothing radical in aspiring to be average when it comes to taxation levels.

While a few corporations and individuals could carry through on their threats and leave, good public policy should not be made based on accommodating individuals or businesses that lack a basic commitment to the province and the quality of life of its citizens. Their investments, if they are such a high flight risk, hardly contribute to a sustainable, robust economy for B.C. If on balance the province can still raise more revenues and put that money to good use, then it is worth doing, and the net economic and employment impact will be positive.

Argument 3: If we raise taxes, people will simply increase their efforts to avoid paying them, and thus revenue increases will be minimal.

This is not an argument against tax increases. Rather, it is an argument for closing tax loopholes and hiring more tax auditors. The tax code is complex, and the preferential tax treatment of certain sources of income encourages people to engage in "creative" means of understating their income or sheltering it from taxes to minimize their tax liability. But this is hardly a reason not to pursue needed tax increases that serve the public interest. People using loopholes are using the tax system that's put in front of them. If our tax system allows for too much income to be legally sheltered from tax, then we need to take a closer look at the various tax credits and deductions and end unfair tax preferences. If individuals are engaging in legal tax avoidance, for example, by hiding their income in tax havens, then we need our governments to crack down on tax havens. And if people are illegally evading their taxes, we need to beef up audits and enforcement.

B.C. ought to have a more steeply progressive tax system, with more tax brackets at upper-income levels. This would raise additional revenues for needed programs AND ensure those at the top pay a fair share AND help us tackle income inequality.

For most of us, our B.C. provincial income taxes are remarkably low, given what we receive in public services (as outlined in a CCPA blog post here). The scope of unmet social and environmental needs in our province means most of us need to pitch in a little more to strengthen our communities and build a province we can all be proud of.

Ultimately, as the CCPA recently found in its polling with Environics, most British Columbians are prepared to pay a little more of their income in taxes, provided it results in better access to public services, less poverty, and a healthier environment.

It is time for a thoughtful, democratic conversation about taxes. The idea that we should debate whether taxes are 'good' or 'bad' is old. The questions we need to answer now are: What are the things we want to pay for together, and how can we raise the money needed in a way that ensures everyone pays their fair share?