A 16th round of the Trans-Pacific Partnership (TPP) negotiations is underway in Singapore this week. Canada and Mexico join the nine other TPP countries for the second time since the U.S. government invited its NAFTA partners to join late last year. 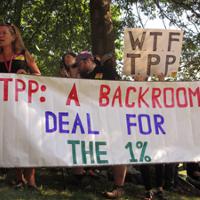 The TPP is a super-sized trade deal-expanding on so called "next generation" trade and investment deals that NAFTA countries have pursued in the wake of the stalemate at the World Trade Organization. This pluri-lateral agreement poses serious new threats to North American communities -- threats that a tri-national movement of trade justice activists is preparing to fight in the lead-up to a possible July TPP negotiating round in Canada.

Since NAFTA was signed almost 20 years ago, all three North American countries have seen good jobs vanish, worsening income inequality, public services weakened through underfunding or offloaded to the private sector, increased food insecurity (in particular in Mexico), and ecosystems on the point of breaking. NAFTA promised a flourishing North American economy that would benefit all. In Jan. 2014, NAFTA has been in place for 20 years and the promised trickle down benefits have not been realized by communities.

In the past 10 years, Canada has lost 500,000 manufacturing jobs. A new United Way Toronto report found that in and around Toronto, Canada's largest city, 20 per cent of people are now employed in precarious, unstable or part-time jobs. This type of employment has increased by 50 per cent in the past 20 years since NAFTA was signed. In this same period, not a single notable social program has been introduced or expanded. Free trade has permanently eroded our sense of what people can do together for the common good.

Canada is also facing over $2.5-billion worth of legal suits by corporations that are permitted to sue countries under NAFTA for potential profits if blocked by health and safety or environmental laws from conducting business as usual. Current suits include a U.S. corporation challenging a moratorium on natural gas fracking in Quebec, a court decision to annul a patent by Eli Lilly, a decision against opening a new gravel quarry in Ontario because of the likely effect on water and farmland, and many others "coming down the pipeline."

In Mexico millions of small farmers were displaced when NAFTA came into force in 1994 creating a massive push for migration to the United States. But NAFTA hit Mexico very hard again during the 2008-2009 financial crisis given Mexico's dependency on the United States. In fact, Felipe Calderon's presidency has been characterized by the slowest growth since 1954, a mere 1.58 per cent in average from 2007 to 2011, and, according to World Bank indicators, between 2007 and 2010, GDP per capita in Mexico decreased by 3.71 per cent, which is among the worst performance in Latin America.

The United States, which is leading the TPP charge, has also suffered under NAFTA. The AFL-CIO in February challenged the benefit the TPP offers to workers, citing that the U.S. trade deficit "has increased dramatically under NAFTA -- from $75 billion in 1993, to $540 billion today (in nominal terms)." Since the implementation of NAFTA, says the AFL-CIO, "the growth in the trade deficit with Mexico has cost the United States nearly 700,000 net jobs." The AFL-CIO is calling for a Global New Deal that promotes growth "with equity, protect their health and safety and foster sustainable development."

Next generation of handcuffs

Next generation corporate trade deals like the TPP and the proposed "comprehensive" pacts that Canada, the U.S. and Mexico are pursuing with the European Union, purposely take away our ability to pursue alternative economic strategies. These deals are designed to ensure that governments have no power in the economy, and that they are only useful when they are using tax payer dollars to bail out large banks and other corporations.

Like NAFTA, the TPP will handcuff our ability to set regulations in key areas like finance, industry, the environment, public procurement and fostering programs to create jobs at home. Free trade offers corporate subsidies for the rich and cut-throat competition for everyone else. So it should come as no surprise that communities across the continent and the Western Hemisphere are mobilizing in what can be expected as the battle against the TPP.

On Dec. 1, hundreds of labour, community, public health and internet freedom advocates from Canada, the U.S and Mexico descended on the Peace Arch Park in Surrey, B.C., between Washington State and British Columbia. The Tri-National Unity Statement that came out of that strategic gathering has been signed by hundreds of organizations representing tens of thousands of people across the continent.

Since our Dec. 1 cross-border action, community and NGO organizations from central and Latin America are raising their collective voices in opposition to the TPP. This opposition was solidified at the People's Summit in Santiago de Chile -- parallel to summit EU-CELAC Summit -- this past January where civil society gathered to express and share their concerns and develop strategies to stop it. They are calling out the TPP as a ‘tool of disintegration' in the region because it attempts to destabilize regional processes of integration that challenge the neoliberal model inherent in the TPP.

These alternatives include the Union of South American Nations (UNASUR) and The Community of Caribbean and Latin American States (CELAC), as well as economic blocs like MERCOSUR and ALBA trading regions. The TPP is seen in Latin America as a second attempt by the United States to push a Free Trade Area of the Americas (FTAA) in the region with help from countries whose governments are subservient to de the U.S. led neoliberal ideology and "free trade" economics.

Stopping our governments from doing any more damage with corporate rights pacts like the TPP needs to be a priority of the peoples of North America. We must demand an alternative, more equitable and sustainable global trade regime. Trade and investment deals must respect and promote fundamental environmental rights, indigenous sovereignty, labor rights, including equal rights for migrant workers and people of color.

Communities and local governments need to be able to actively create high-wage, high-benefit jobs in ways that do not undermine the well-being of our sisters and brothers globally.

Governments must be able to promote democratic public policies in the public interest without fear of catastrophic lawsuits in non-democratic and non-transparent investment tribunals.

Free trade creates rich people not rich communities. We have 20 years of evidence from NAFTA... we don't want any more. Stop the TPP! Sign the tri-national statement of unity against the Trans-Pacific Partnership, and to sign-up to be more involved, go to www.tppxborder.org.