As Damon Runyan said, "The race is not always to the swift nor the contest to the strong -- but that's the way to bet." 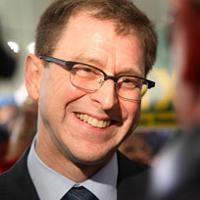 'I Own Memo Mistake' Says Dix, Pointing to His Record Since

Similarly, the "chalk" player places his couple of bob on the NDP -- not the ranch, however.

In 1996, the only time in history a British Columbia government won without a plurality, Gordon Campbell of the BC Liberals decided to rest on his oars and lost.

It looked like a piece of cake. The NDP had taken such a beating on the Nanaimogate scandal that their premier, Mike Harcourt, who had nothing to do with to mess directly, had resigned. Glen Clark replaced him, and a scant few months before the election was hit by an alleged BC Hydro scandal where a company set up by Hydro for a deal in Pakistan had a shareholders list that looked like an NDP party rally.

Even from this vantage point it's hard to believe, but while Campbell waited it out, Clark campaigned and the NDP won its first stand alone victory in history. (Although they won in 1972 and 1991, that was a case of the Socreds tanking, not public love of the NDP.)

While it is early days, Dix seems to be following in Campbell's footsteps.

How to fight Libs' negative attacks

Today's BC Liberals have a lousy leader but a good campaigner at the helm and she will concentrate on two things -- Dix's creating a false memo to help Glen Clark out of the mess he was in over a gambling license and the dismal financial record of the NDP years.

Politics in B.C. is a blood sport, and you ignore that at your peril.

You have to deal with the memo and it can be done simply. "At least I resigned, which is a hell of a lot different from Gordon Campbell who was in jail from drunk driving and carried on as premier as if nothing had happened."

Moreover, this is the time to talk about BC Rail, an ongoing scandal.

The charge of fiscal irresponsibility must be faced down, which you can do by pointing out that the BC Liberals have tripled the provincial debt. Moreover, they won an election in 2009 with a budget that was $1.2 BILLION dollars out!

The Liberals will claim that they were sideswiped by the recession which you offset with the NDP being hit by fall of the Thai baht -- the so-called Asian flu -- which all but shut down the forestry industry.

If you insist on staying on a lofty plane, the Liberals will kill you on these two issues.

How to go positive on environment

Adrian Dix, for the first time in this octogenarian's life, the environment is an issue big time -- though you'd never know that by the media. And the Liberals will avoid the issue like it was the pox.

But it's there. And your record and that of the party has been wishy washy at best.

The private power projects have destroyed some 75 rivers and promise to do the same to many more.

As recently as last Monday, a document disclosed 749 infractions of private power companies without a single charge and that power companies are permitted to govern themselves. There is also no doubt that this 749 only gives the tip of the iceberg.

God only knows how many infractions fish farms commit, because no one is inspecting them.

In your zeal to look like a nice guy to business, it's not you or the NDP investigating these matters.

You have opposed the Enbridge proposed pipeline, yet even though you know as much about the proposed Kinder Morgan proposals as you do about Enbridge, you're treading water with them.

Where do you stand on Site C? This is an issue that could actually get you a seat in the northeast. The issue has become "Why create an environmental and fiscal nightmare in order to provide power to the natural gas industry's fracking methods?"

You seem content with a grand commitment to exporting liquefied natural gas (LNG), but unconcerned with the pipelines this will require and the effect they will have on our wilderness.

Of much more importance, by accepting the policy of the Clark government you must be accepting fracking, a process which involves drilling vertically, then horizontally to oil and especially natural gas by pumping huge quantities of water laced with deadly chemicals.

What research have you done on this?

You seem not only timid about raising these issues, but scared!

Unless I miss my guess, the BC Liberals will concentrate on the future economy, skating around these issues while you will have no strong opinions, let alone a party stand.

No one, least of all I, can predict what issues will develop in an election.

Of course it's important not to be seen as anti-business. But in doing this while not criticizing what industry is doing, you are courting disaster for yourself by alienating not only your core support but those in the middle, who, while disenchanted with the BC Liberals but unsure of where you stand, could well just stay home. And it's the people who stay home who often decide an election.

Get off your butt, Mr. Dix, not because the BC Liberals might win but because you might just lose, and forever be linked with Gordon Campbell as another man who leaned on his oars when he should have been rowing like hell.