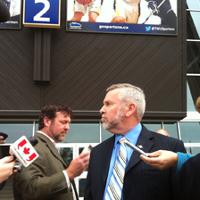 A Weekend to Forget for BC Conservatives

The wild political shootout at the B.C. Conservative Party corral last weekend didn’t produce any fatalities, but it may have shaped the province's political future by laying the groundwork for yet another party -- or a B.C. Liberal leadership revolt.

On Saturday, B.C. Conservative leader John Cummins got through an unwanted leadership review vote demanded by dissidents unhappy with his style, winning 71.4 per cent of membership ballots.

Those who loudly complained about Cummins in the media, led by party vice-president Ben Besler, were all purged in their bids to sit on the executive.

The results led the party's only MLA, John van Dongen, to bolt for the doors, leaving the B.C. Conservatives again with no presence in the B.C. Legislature. The veteran MLA and ex-solicitor-general had quit the B.C. Liberals to join forces with Cummins in March, creating a political earthquake for Premier Christy Clark.

But beneath the drama, potentially yet more significant developments were taking place.

Sources in the B.C. Conservative Party told 24 hours Sunday they believed van Dongen planned to replace Cummins as leader and then approach the B.C. Liberals with a plan to ditch Christy Clark and bring the two parties together under van Dongen.

In an interview Sunday night van Dongen didn't confirm or deny holding discussions with the B.C. Liberal MLAs, but did reject B.C. Conservative claims of forming another party.

But van Dongen says some of the allegations are way off.

"The Cummins group is convinced I'm going to start a third party -- that's news to me," van Dongen says.

The Abbotsford-South MLA, who intends to sit as an independent, says he does want to find an alternative to the current opposition facing the surging New Democrats under leader Adrian Dix, saying neither Clark nor Cummins can win.

And he fired both barrels at his recent former leader, veteran Conservative and Reform Party Member of Parliament Cummins.

"Cummins doesn't care that 30 per cent of his party is unhappy with him and he doesn't even make them an overture in his speech," van Dongen said.

"People like Cummins and all the people of his vintage -- Randy White, Darrell Stinson, Jim Hart [former Reform Party MPs now advising the B.C. Conservatives] -- none of them have ever been in government," van Dongen said. "It's easy to criticize in opposition, but it's not like being in government."

"This guy [Cummins] never even made it to parliamentary secretary in the Conservative federal government," van Dongen added.

For his part, Cummins laid into van Dongen too.

"One day he was satisfied, the next day he wasn't, now he's out of there," Cummins told Sean Leslie on CKNW radio Sunday.

"Now he told the news yesterday that he was going to the next Liberal convention in Whistler, but he wasn't going to join the party as long as Premier Clark was leading it -- if you can figure that out, go right ahead -- I can't," Cummins said.

But van Dongen said in an interview that he "might possibly" go to the B.C. Liberal convention's so-called "Free Enterprise Friday" that is open to non-members looking for an anti-NDP alternative.

Conversely, van Dongen confirmed that he would not re-join the B.C. Liberals so long as the party is led by Clark.

Party-building 'not for faint of heart': Cummins

Where will van Dongen end up?

"I'm open to a range of different options," he told me. "I'm at peace with my decision." And in an interview with CKNW's Sean Leslie on Saturday van Dongen said:

The veteran MLA left the B.C. Liberals in part over the B.C. Legislature Raid case scandal when he learned his government had paid the $6-million legal defence fees of former government aides Dave Basi and Bob Virk despite their guilty pleas for giving confidential information to lobbyists for a bidder in the $1-billion privatization of B.C. Rail.

Van Dongen says he will continue to work on digging up more information on that case and attending the final arguments in early December in an application brought by Auditor-General John Doyle to obtain government documents connected to Basi and Virk's legal billings and those of others with indemnifications for legal fees. Van Dongen was granted intervener status in the case.

But for Cummins, van Dongen and the dissidents are simply irritation removed from his road to the May 2013 provincial election.

The B.C. Conservatives held a training school Friday for 23 potential candidates, and notwithstanding their public bloodletting are recruiting both more candidates and corporate funding. A statement from Cummins on the weekend talks about his speech on changing the legislative calendar while ignoring the battle royale that took place.

When asked, Cummins acknowledges the challenges in a matter of fact way.

"Building a new party is not for the faint of heart. That's the bottom line here. It's unfortunate when these sorts of things happen, but that's life in the political realm," he told CKNW Sunday.

What's most important to Cummins now is that he has clear control over the B.C. Conservatives and eight months to build a centre-right alternative to the beleaguered B.C. Liberals, who lost Clark's chief of staff Ken Boessenkool Monday morning in a surprise resignation over an "inappropriate personal incident of concern."

Despite the infighting, the Conservatives polled 19 per cent this month and the B.C. Liberals just 25 per cent in an Angus Reid survey this month -- and those are the numbers Cummins cares about most.