"In a field populated by hypocrites and phonies, the erstwhile B.C. premier takes duplicity -- and recklessness -- to an entirely new level." -- Warren Kinsella, Toronto Sun columnist 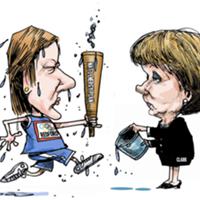 Threatening to egg the Alberta legislature unless the oil-rich province coughed up billions didn't go over well there, nor did Clark sneaking in the back way to meet Redford while trying -- unsuccessfully -- to avoid the media.

But it was only when the B.C. premier issued ultimatums at the national premiers' conference that things got really out of hand.

Kinsella -- like Clark, a lifelong federal Liberal who actually worked for the BC Liberals in the 1996 campaign when Clark was first elected MLA -- called her a "nation wrecker."

And Mark Milke of the right-wing Fraser Institute accused Clark of "playing a risky and ill advised game of economic chicken" while Carrier Sekani Tribal Council chief Terry Teegee said it was unacceptable the premier was acting like a contestant on TV game show The Price is Right "while putting our lands, our waters and our futures at risk to devastating oil spills."

The game comparisons continued with Sun News columnist Rick Bell saying the unpopular Clark was trying the political equivalent of a football "Hail Mary pass, while trying real hard not to blink" in suggesting the pipeline won't go ahead unless Alberta prepares a multi-billion dollar cheque for B.C.

But the more accurate game analogy than any of these is poker.

Clark has a lousy hand and is already deeply in the hole, down to her last chips.

Clark doesn't have the political support to back a strong stand, didn't even register the province to present evidence at National Energy Board hearings, and can't credibly oppose Enbridge on environmental grounds after negotiating in public for hush money.

Walking out of the premiers' conference while refusing to consider supporting a national energy strategy gave Clark a big media hit but alienated the other premiers.

So her only chance is to bluff well and pray the other players fold without discovering that Clark only holds a pair of twos.

It's a cold, calculated high-risk gamble that has left many card players hitchhiking their way out of Las Vegas, broke and looking for honest work.

Is Christy Clark any luckier?