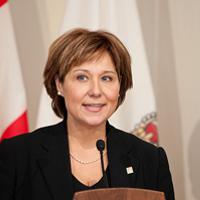 Open Letter Urging Premier Clark to Act for BC

The B.C. New Democrats say building the pipeline through northern B.C. to Kitimat and then sending bitumen to Asia via giant tankers down B.C.'s coastline would be too environmentally risky.

"Under the Enbridge proposal, British Columbia would assume almost all the project's risk, yet would see only a fraction of the benefits. By any measure, such a high-risk, low-return approach simply isn't in B.C.'s interests," NDP leader Adrian Dix said in formally registering opposition with the National Energy Board's Joint Review Panel.

Agree or disagree, Dix is clear.

Another provincial party supports the Enbridge pipeline on the basis of economic development -- the B.C. Conservatives.

"We believe and support the notion of the Enbridge pipeline. We think it would be good for British Columbia, good for Canada to get a better price in the world market for our oil," B.C. Conservative leader John Cummins says in an Integrity B.C. online video.

But our governing party -- the BC Liberals -- won't take any understandable position on the pipeline.

All over the pipeline map

In a CBC Radio interview Saturday with host Evan Solomon on The House, Clark was all over the map on Enbridge.

Clark says if the pipeline goes ahead B.C. "would get as many benefits as Nova Scotia," and that "it would create almost no jobs in British Columbia." Sounds opposed.

But then Clark tries to have it both ways.

"Evan, I'm pro-pipeline... we're enabling the construction of three pipelines from the Peace River country... Those are going to be liquefied natural gas... It's going to mean $60 billion in revenue to the province. So we're very much pro-economic development." Sounds in favour.

But if Clark is actually "pretty cagey" on Enbridge, it hasn't stopped her from publicly attacking federal NDP opposition leader Tom Mulcair for expressing concerns about the impact of oil sands exports on Canada's economy, by inflating the value of the dollar and negatively affecting the manufacturing sector.

"I really thought that type of thinking was discredited and it had been discredited for a long time. It's so backwards. I think that's just goofy," Clark told CBC.

"The NDP talk their gobbledygook, but really... they want less economic development. We all know it's a recipe for disaster."

What Mulcair actually said was also clearer than Clark’s views.

"The Canadian dollar is being held artificially high, which is fine if you're going to Walt Disney World, [but] not so good if you want to sell your manufactured product because the American clients, most of the time, can no longer afford to buy it," Mulcair said May 5.

"We've hollowed out the manufacturing sector. In six years since the Conservatives have arrived, we've lost 500,000 good-paying manufacturing jobs," he added.

Mulcair compared oil exports increasing the world value of Canada's dollar, making manufacturing exports more expensive, to the "Dutch disease" of the 1960s, when the Netherlands developed huge offshore natural gas deposits and its manufacturing sector was severely damaged by the higher value of its currency.

And Mulcair said in a substantive Policy Options magazine article in March he does not oppose oil sands development but wants it done in a sustainable manner that includes oil companies paying the costs of environmental impacts.

Clark, not surprisingly, hasn't explained why she believes Mulcair is wrong -- preferring to fire off insults than debate economics.

But some of her comments about Enbridge may be more alarming to its proponents than the NDP.

After all, Enbridge and its supporters strongly argue it will bring major benefits to B.C. through jobs, investment and tax revenue.

So this telling exchange between Clark and Solomon about Enbridge may rankle them:

Clark: "If it goes ahead, at the moment, British Columbia would get as many benefits as Nova Scotia."

Solomon: "I don't understand that -- what do you mean by that?"

Clark: "Well, it would create almost no jobs in British Columbia but we would be a net beneficiary just as any other province is from the royalties that go to Canada."

Solomon: "This is interesting. Building the pipeline doesn't really create jobs for B.C.?"

Clark: "It creates some jobs in the construction phase but there are almost, there are very few long term jobs that would be left in the province after that."

"So for us it's really a balance of risk and benefit. Evan, I'm pro-pipeline. We're building three pipelines, we're enabling the construction of three pipelines from the Peace River country in the northeast right across British Columbia to the north west in Kitimat and Prince Rupert."

"Those are going to be liquefied natural gas... It's going to mean $60 billion in revenue to the province. So we're very much pro economic development."

Hmmm. "Goofy gobbledygook" seems an appropriate description all right, but for Clark's confused views on the Enbridge pipeline, not Mulcair's.