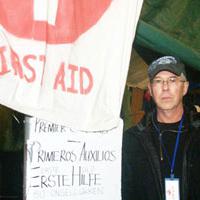 Occupy Vancouver was supposed to be talking about a revolution -- against big business greed and obscene income inequality.

Inspired to show solidarity with the original Occupy Wall Street movement, it was a righteous reaction against Canada's own problems -- like the fact that just 3.8 per cent of Canadian families control 67 per cent of household wealth.

British Columbia has its own powerful reasons for protest. This province has had the worst child poverty rate for seven straight years. And the forced eviction of adults with developmental disabilities from their homes by the government's Community Living B.C. is appalling.

Add in the meltdown of global financial markets yet again, with the job loss and suffering that creates, and you have a recipe for an energetic populist movement that could change the world for the better.

Instead Occupy Vancouver has turned into a sad parody of a revolution -- with absurd demands and no recognition that a squat on city property does diddly-squat to build support for the real change that would curb corporate control.

But it could help Vancouver's right-wing Non-Partisan Association regain control of the city in the Nov. 19 municipal election by defeating Mayor Gregor Robertson and his Vision Vancouver and Coalition of Progressive Electors team.

That would be a brilliant "revolution" indeed -- to elect a council full of people who oppose everything Occupy Wall Street has raised.

And to defeat a progressive majority who are trying to end street homelessness, make Vancouver the greenest city in the world and an arts and culture capital.

Saturday's tragic apparent drug overdose death of Ashlie Gough, a 23-year-old woman from Victoria, was an overwhelmingly clear signal that Occupy Vancouver is unsafe and needs to end as soon as possible in a peaceful manner.

But no. Supporters on Twitter actually asked if Vancouver would shut down a hotel if an overdose occurred and announced they don't recognize the authority of police, fire or City staff on "their land" at the Vancouver Art Gallery.

An online petition promoted by Toronto activist and Rabble.ca founder Judy Rebick calls on the city to "Stop bowing to political pressure to remove the camp and acknowledge that a political protest is protected under the Charter of Rights and Freedoms."

"Recognize that encampments are integral to Occupy Vancouver and the movement as a whole," the petition signed by less than 2,000 says. "Talk of splitting the two is a disingenuous way to split the issue. The protest is the encampment is the movement."

No, it's not the movement. The movement is not and should not be about the encampment. It is about a set of ideals.

When the medium of protest became the message, it was lost. The right to squat on any public property is not the same as demanding a financial transactions tax of one per cent to fund social programs -- the Tobin Tax.

However the online petition goes the other way -- even suggesting conspiracy theories about Vancouver manipulating safety issues. Another of the demands asks Vancouver to:

"Acknowledge that the City is playing politics with health and safety and the Vancouver Fire Department is being used to pursue the political goal of removing the camp before the election."

Forget that propane burners have been found in several tents. Forget that the city has even supplied power to the camp to provide heat and discourage use of dangerous fuels -- it's a conspiracy!

But what to expect when the partial rough draft list of 59 demands posted on the Occupy Vancouver website include:

-We demand an independent investigation into 9-11 which will examine all evidence including that which would support a false-flag explanation.

-We demand that prostitution be legalized and regulated as it is in New Zealand.

-We demand -- as Bertrand Russell suggested -- there be two police forces -- one to prove your guilt and another to prove your innocence. We demand lawyers be required to work in pairs so that a lack of resources won't be a factor in deciding a case. (Alternative: We demand increased funding for legal aid.)

-We demand the repeal of the Controlled Drugs and Substances Act. All synthetic drugs and hard drugs (including cocaine and heroin) must be distributed by prescription through a pharmacist.

-We demand that all harmless people be protected in the constitution. If a new law is written and a new set of people are to be criminalized, the burden of proof will now be on the government to provide evidence that this new group of criminals is inherently harmful to others. This will end scapegoating.

-We demand the release of all non-violent prisoners.

To be fair, there are lots of demands that many would heartily support -- even if some are highly unlikely to be achieved.

-We demand that the wealthiest one per cent pay their fair share by the closing of tax loopholes such as dark pools of liquidity and employer-side payroll taxes. Progressive taxation principles must prevail, income from capital must be taxed at the same level as wage income.

-We demand that the federal government keep out of private-sector union negotiations.

-We demand the prohibition of self-regulation by large-scale industries.

-We demand that a "ministry of whistle-blowing" be created with the power to protect any whistle blower –- corporate or otherwise -- from harm of any kind. We need to be able to safely call attention to injustice. Previous failed attempts to do this should be learned from.

But mixing conspiracy theories and fringe positions with populist politics isn't going to appeal to the 99 per cent of ordinary people who are supposed to be backing the Occupy movement against the privileged 1 per cent who run the economy.

People sleeping in tents in the cold and rain with obvious hard-drug use going on is not going to mobilize working people who have suffered three decades of wage stagnation while the super rich get even wealthier.

As Gil Scott-Heron -- a long-term debilitated drug addict himself -- put it:

Unfortunately, Occupy Vancouver will be televised, but it will not be the revolution it once promised.