"There has been class warfare going on. It's just that my class is winning. And my class isn't just winning, I mean we're killing them." -- Warren Buffett, world's third richest man 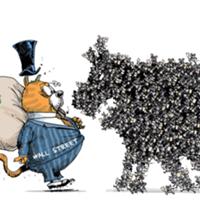 When billionaires complain about the growing income inequality between rich and poor, you know that the Occupy Vancouver protest that started Saturday just makes sense.

When the third wealthiest man in the world -- Warren Buffett -- says the United States government should stop "coddling the super rich" like him and raise taxes on millionaires, you know something is dramatically wrong.

When Bill Gross, who runs the world's largest bond fund -- the $1.2 trillion Pacific Investment Management Co. -- says that the Occupy Wall Street protest is an unsurprising reaction to the class war started by the rich against the rest of us, you know this is not situation normal.

And when Laurence Fink, who runs BlackRock Inc. -- the world's biggest asset manager, with $3.7 trillion invested -- says protestors spreading the Occupy message around the world have a point, look out.

"These are not lazy people sitting around looking for something to do," Fink says. "We have people losing hope and they're going into the street, whether it's justified or not."

Canada's one per cent issues

While B.C. Premier Christy Clark and federal Finance Minister Jim Flaherty were quick to say things are totally different in Canada than the United States, they are dead wrong.

The more than 4,000 protestors who gathered outside the Vancouver Art Gallery on Saturday disagree, and for good reason.

The Occupy Wall Street movement points out that one per cent of the United States' population -- the mega-rich -- own a disproportionate 40 per cent of that country's total wealth. That's why this protest is aimed at helping the other 99 per cent.

But our country is not very different. A recent study found that just 3.8 per cent of Canadian families control 67 per cent of total household wealth.

Other studies have shown that Canada's top one per cent took home a massive 33 per cent of all income gains between 1997 and 2007.

That's why we should listen when mega-rich managers like Buffett, who made $40 million in 2010 but paid only 17.4 per cent income tax on it, Fink, who made $23.8 million last year, and Gross, who gave $33 million to charities last year and is worth $2.2 billion, warn about the gap between rich and poor.

"Class warfare by the 99 per cent? Of course, they're fighting back after 30 years of being shot at," Gross said on Twitter Oct. 12.

Fifty-billion-dollar man Buffett wrote a surprising editorial in the New York Times on Aug. 14, calling for a tax increase on the wealthy: "While the poor and middle class fight for us in Afghanistan, and while most Americans struggle to make ends meet, we mega-rich continue to get our extraordinary tax breaks.

"For those making more than $1 million -- there were 236,883 such households in 2009 -- I would raise rates immediately on taxable income in excess of $1 million, including, of course, dividends and capital gains. And for those who make $10 million or more -- there were 8,274 in 2009 -- I would suggest an additional increase in rate," Buffett wrote.

Those dismissing the Occupy Wall Street movement, which originated from Adbusters culture jamming magazine based right here in Vancouver, are foolish.

The very wealthiest men in America aren't just worried about income inequality -- they are preoccupied with it.