Released on Thursday, B.C.'s public accounts for the fiscal year 2009/2010 conclusively prove that the pre-election fiscal plan foisted on British Columbians by Premier Gordon Campbell and his BC Liberals on Feb 17, 2009 was the worst -- the most egregious, the most deceptive -- "Fudge-it Budget" in provincial history. 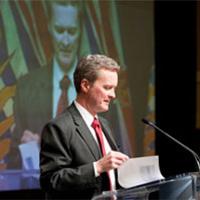 The result: a gargantuan shortfall of $1.779 billion for fiscal 2009/10 -- nearly four-times higher than Campbell's oft-repeated, pre-election pledge of a deficit no bigger than $495 million.

Caught in a global crash

Let's go back to the fall of 2008, when the world was caught in an alarming financial and economic meltdown. In September, Lehman Brothers, one of the United States' five biggest investment banks, declared bankruptcy. Earlier in the year, Bear Stearns, another of the "big five," avoided a similar fate only through its forced sale to JP Morgan Chase. And bare weeks after the fall of Lehman, Merrill Lynch was rescued in a government-ordered sale to Bank of America.

Dozens of the U.S.'s largest financial institutions -- insurance companies like AIG (bailed out by the U.S. Federal Reserve and forced to liquidate assets), mortgage providers such as Countrywide Financial (also acquired by Bank of America), banks and thrifts like Wachovia (rescued by Wells Fargo) and Washington Mutual (liquidated, parts sold to JP Morgan), and even government-backed mortgage-guarantors Freddie Mac and Fannie Mae -- either fell into or faced oblivion.

Within days of Lehman's failure, officials appointed by President George W. Bush met with the U.S. Congress and begged for an unprecedented and massive bail-out. By early October, efforts by Treasury Secretary Henry Paulson and U.S. Federal Reserve Chair Ben Bernanke were rewarded with passage of the Emergency Economic Stabilization Act, a central feature of which was the controversial $700 billion-plus Troubled Asset Relief Program (TARP).

The fiscal contagion quickly spread beyond financial institutions. Companies across North America and Europe began to retrench, cancelling or scaling-back capital expenditures and laying-off workers; many simply shut their doors. (Within a year, the governments of the United States, Canada and Ontario found themselves the reluctant owners of two of the world's largest automobile manufacturers, General Motors and Chrysler.)

Unemployment soared around the globe and governments everywhere were faced with plummeting revenues. Administrations of every ideological stripe -- left, right, and in-between -- faced the prospect of massive fiscal deficits and skyrocketing debt loads.

Alarmingly, economists, politicians and others began to discuss a reprise of the Great Depression of the 1930s.

One of the politicians who evoked memories of the Dirty '30s was B.C. Premier Gordon Campbell. On Oct. 22, 2008 -- mere weeks after the collapse of Lehman Brothers and the U.S. Congress's enactment of TARP -- he went on province-wide television and began his remarks by saying: "Today the world's financial system is in the grips of the worst crisis in over 75 years."

"World stock markets are reeling, commodity prices are plunging and the world's financial system is under attack. The ripple effects are being felt in every corner of the globe and every region of our province."

He added: "I thought it was important to speak with you directly about what it means for British Columbia and the new actions we will take to help keep B.C.'s economy strong."

The timing could not have been worse for Campbell's political fortunes. In just four months time his government was obliged to present its budget for 2009/10. That budget, moreover, had to be "balanced."

And then three months after that, the Campbell Liberals were to face the B.C. electorate.

It was simple. First the Campbell Liberals gutted their own balanced-budget law, amending it to permit fiscal shortfalls over a four-year period.

And then they lied. On Feb. 17, 2009, Hansen unveiled a budget with a relatively miniscule $495 million shortfall (just 1.3 per cent of revenues), a budget British Columbians now can see -- thanks to the just-released public accounts -- was chock-full of misrepresentations, falsehoods and distortions.

In 2008/09, the fiscal year just ending when the BC Liberals brought in their pre-election budget, personal income tax (PIT) revenues added up to $6.097 billion. Given the slowing economy -- and, as Campbell said, conditions that resembled the Great Depression -- would it have been prudent for Hansen to plan for a reduction in PIT revenues in 2009/10?

Probably, but instead he claimed that the personal income tax would generate nearly half-a-billion extra dollars -- $6.562 billion -- compared to the preceding year.

It was a similar story in every other category of tax revenues. Hansen overstated corporation income tax receipts by $208 million, property taxes by $117 million, the fuel tax by $454 million and the carbon tax by $4 million.

In fact, Hansen's pre-election budget even showed income of $54 million from the re-jiggered corporation capital tax (which supposedly was to become a minimum tax for large financial institutions).

Post-election, of course, the BC Liberals quietly repealed the minimum tax and gave away the entire $54 million to Canada's most-profitable corporations, our big banks.

Yes, even as the world's economy was collapsing and Gordon Campbell evoked memories of the Great Depression, B.C.'s finance minister told British Columbians that provincial revenues were on the rise.

And it wasn't just tax revenues that the Campbell Liberals enhanced before facing B.C. voters. Forests revenues -- even as the U.S. housing sector was in free-fall -- were projected by Hansen to increase to $609 million.

In the year just ending, 2008/09, as the BC Liberals' brought in their pre-election budget, Consolidated Revenue Fund receipts totalled $30.471 billion.

The public accounts for last year now disclose that CRF income actually was $28.570 billion -- a discrepancy of $2.558 billion from Hansen's pre-election forecast.

That's $568 for every man, woman and child living in British Columbia.

(And that's after an end-of-the-year, last-minute $250 million gift from Ottawa to help Victoria make the transition to the Harmonized Sales Tax.)

Looked at another way, it is evident that Campbell, Hansen and the BC Liberal government overstated Victoria's pre-election CRF revenues by more than eight per cent.

Nearly every British Columbian of voting age and above probably remembers the outcry sparked by those fudged fiscal plans for 1995/96 and 1996/97.

A group of outraged citizens, led by David Stockell of Kelowna (and financially supported by the National Citizens Coalition), commenced a legal action in B.C. Supreme Court against a trio of NDP MLAs, alleging that their party had won the 1996 general election by "fraud." (Several years later, in 2000, the court rendered a verdict of acquittal.)

In Victoria, the province's auditor general launched a review of the entire budget-making process, and subsequently issued a report that described as "inappropriate" the New Democrats' arbitrary boosting of certain revenues.

Perhaps no group was more outraged by the Clark government's budgets than the provincial news media.

In his book, Barbarians in the Garden City, a screed that alleged the New Democratic Party in the 1990s had turned British Columbia into the "village idiot of Confederation," author Mark Milke wrote of "the 1,000 documents released in 1996 after the Vancouver Sun used freedom of information laws to dig through the government's Maginot line of political spin."

Has anyone seen anything close to a comparable effort by the Sun to get at the "truth" in the many months following Hansen's fudge-packed, pre-election fiscal plan?

BC's media spins the opposite

Tyee readers will be shocked to know that Thursday's release of the 2009/10 public accounts garnered little criticism from B.C.'s mainstream news media.

In fact, rather than acknowledging the historic size of the pre-election fudge larded-out by Campbell and the Liberals in early 2009, the provincial media strove to praise the government's ability to record a smaller-than-expected shortfall in tough economic times.

"B.C. deficit projection shrinks by $1-billion" was the headline on a Globe and Mail story, while "B.C. deficit $1 billion lower than projected for 2009-10" ran above a report in the Vancouver Sun.

That's because in September 2009, just three-and-a-half months after Campbell and the BC Liberals won re-election to government, Hansen introduced a follow-up fiscal plan that showed a post-election shortfall of $2.8 billion.

And for the media, that September re-write became the new benchmark -- especially when the government's Public Affairs Bureau guided their thoughts with a misleading news release to announce publication of the public accounts.

It seems obvious that most mainstream reporters simply re-wrote the PAB spin without bothering to consult or examine either the actual public accounts or the pre-election budget.

As for legal action by concerned citizens, or a full-blown review by the auditor general, well ... don't hold your breath.

B.C.'s 2009/10 public accounts reveal a massive and historic misrepresentation of the province's finances by Gordon Campbell's BC Liberal government on the eve of the 2009 general election. But it's news that's likely to remain unknown by most British Columbians, while the public accounts themselves are ignored on the musty shelves of the legislative library.