There is, for good reason, a lot of enthusiasm across the country as the groundswell against Stephen Harpers' cynical shuttering of Parliament continues to grow. The prime minister from hell has gotten away with so much -- and the opposition is so weak that any indication of genuine public disgust at his continuing demonstration of contempt for democracy is a welcome sign. And everyone who cares about the country should be taking part in the new movement for democracy. 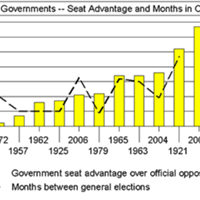 Settle in for Long Harper Reign

But we should also be careful that this issue does not totally distract us from Harper's actual agenda which is still exactly as it has always been -- to dismantle the Canada so painstakingly built by two generations of Canadians. In March, Harper will present his first "austerity" budget. It could prove to be more damaging than the proroguing of Parliament.

Harper is driven by a visceral hatred of what we once referred to as the welfare state. Most people in this world of information overload and 20 second sound bites have probably forgotten that Mr. Harper once ran the National Citizens Coalition (NCC), one of the most right-wing, libertarian organizations in the country -- founded by an insurance broker determined to rid the country of Medicare.

In a speech to the NCC in 1994, Harper gave the Reform Party credit for the reverses in social programs being implemented by the Liberals: "(T)he Liberal government in Ottawa has announced... no new major social spending programs. Universality has been severely reduced. It is virtually dead as a concept in most areas of public policy. The family allowance program has been eliminated and unemployment insurance has been seriously cut back."

Harper is surely the only Canadian prime minister to openly express scorn for his own country, as he did in the National Post on Dec. 8, 2000: "Canada appears content to become a second-tier socialistic country, boasting ever more loudly about its economy and social services to mask its second-rate status."

Stephen Harper doesn't seem to believe that there a separate, distinct Canadian nation. Asked in a 1997 CBC interview, "Is there a Canadian culture?" Harper replied: "Yes, in a very loose sense. It consists of regional cultures within Canada -- regional cultures that cross borders with the US. We're part of a worldwide Anglo-American culture. And there is a continental culture."

In a speech to a right-wing American think tank, Harper ridiculed all Canadians: "I was asked to speak about Canadian politics... it's legendary that if you're like all Americans, you know almost nothing except about your own country. Which makes you probably knowledgeable about one more country than most Canadians." The whole speech was full of such insults about his own country.

The next nail in Canada's coffin

As we inch closer to budget day -- it will come no matter what the outcome of the opposition to proroguing Parliament -- there is almost nothing in the media, and virtually nothing yet from progressive groups, about what we can expect and what the alternatives are. There needs to be, because Harper and his war room strategists are definitely prepared. Indeed, they have already warned Canadians that this budget is the transition to a new era of austerity.

This coming budget was set in motion by Jim Flaherty's 2007 budget which launched a five-year, $60 billion tax cut -- largely for the wealthy and for corporations. He then gave up another $12 billion in revenue by knocking two points off the GST. That effectively created a structural deficit -- that is, an assault on the tax base, which means we cannot avoid yearly deficits in the future, no matter what happens to the economy. This was confirmed last fall by Kevin Page, head of the Parliamentary Budget Office, who stated that in 2013-14, when the economy will have recovered, the deficit will still be $18.9 billion.

Flaherty had to know that his tax cuts would create a structural deficit -- and indeed, it just the crisis he needs to justify the cuts in his upcoming budget. The financial crisis and stimulus spending postponed the day of reckoning -- but it is now upon us. Flaherty has made it clear that he will not deal with the deficit through any tax increases, so look for massive layoffs of federal employees, the shutting down of government agencies and large cuts to others, a wage freeze, attacks to federal employees' pensions and cuts across the board for government departments. We can expect the government's Crown Assets Review to recommend the sale of billions in crown assets, further diminishing the financial status of the federal government.

The limits of elite support

It is gratifying to see such widespread opposition to Harper's assault on Parliament and democracy -- from almost every major political columnist, newspaper editorials, over a hundred political scientists, and constitutional experts -- including a significant number of unusual suspects. It is a clear sign that Harper has overreached yet again -- a character flaw that has saved the country from disaster more than once. Harper now sits at 33 percent in the latest Ekos poll, and if the movement continues to grow, Harper's plan to force an election over his March budget will have to be put on hold. That might have the effect of postponing the worst cuts.

But the sudden support for democracy by parts of the Canadian elite will not extend to defending the legacy of public services, wealth redistribution and government intervention in the economy. Those are the things that are in Stephen Harper's crosshairs, and progressives will have to fight the campaign to stop him on their own.