Monday, Seattle inaugurated a new, ultra-green mayor, which got me thinking comparatively. Which of the three largest Cascadian cities is the greenest? Not in plans and intentions and declarations but in facts? I recently pored over data from the Cascadia Scorecard and other sources. 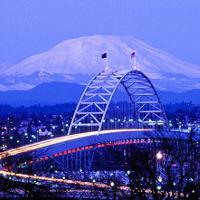 The answer? No contest: Vancouver, BC.

It's not so much Vancouver's new rail transit line under downtown that goes to the airport (which Seattle now boasts too). It's not the city's progressive green mayor, who ran an exceptional, grassroots campaign against a candidate with the support of the business community. (Portland and Seattle have similar mayors, similarly elected.) It's that Vancouver has, among large Northwest cities, the highest urban density, the most cycling, the most walking, the most transit ridership, the fewest cars -- and the least driving -- per person, the lowest greenhouse gas emissions per capita by far (thanks to its car-lite ways and to its carbon-free electricity), the lowest teen birth rate and family size, the highest life expectancy, and the lowest poverty rate. There's hardly a category of the Cascadia Scorecard in which the soon-to-be Olympic city doesn't take gold.

But that's not a surprise, is it?

What's more interesting is the next question, Who takes second?

By reputation, Portland -- darling of planners, cycling mecca of the United States, transit innovator, street-food leader -- seems the obvious silver medalist. I expected it to take second, but didn't count Seattle out. I checked the five (of seven) Cascadia Scorecard indicators for which relevant local data are available: health, economy, population, sprawl, and energy. And for the purposes of this essay, I tried to compare cities, not metropolitan areas (although as noted at the end, I had to rely on sometimes-mismatched data).

1. Health. Which city is healthier overall, as measured by life expectancy?

A baby born last year in Seattle can expect to live 79.6 years, three years longer than a baby born in Portland. That's a huge gap. On the league tables of life expectancy, Seattle is by Germany and the United Kingdom; Portland is down with Albania and Uruguay.

3. Population. Which city has smaller families (a reflection of both women's equality and slow population increase)?

Both cities have average family sizes of 1.7 children per woman. Both cities are almost European in their fertility patterns: women in Portland and Seattle have few children, late in life.

4. Sprawl. Which city does better at growing in compact neighborhoods?

Greater Portland is more compact than greater Seattle, thanks to its tighter urban boundary, regional governance, and more-consistent planning. At last count (way back in 2000 when the last census was completed), about 28 per cent of residents of greater Portland lived in neighbourhoods that were compact enough to support good transit service and local stores. (Call these places, with at least 12 people per acre, "transit neighborhoods.") Greater Seattle lagged at 23 per cent.

But within city boundaries, the two switch places. The city of Seattle outperforms the city of Portland. In Portland, somewhere around 45 per cent of residents live in transit neighborhoods. In Seattle, the comparable figure is 57 per cent. Or that was the situation in 2000. We'll have to wait a year to get new census numbers. Still, both cities have seemed committed to in-fill development in the "aughties." I'd be surprised if Portland has closed the gap.

Even more impressive, at the time of the last census, before the surge of residential development in Portland's Pearl District and around downtown Seattle, some 11 per cent of Seattleites lived in urban neighbourhoods with density in the "walking zone" sweet spot above 40 people per acre. Just four per cent of Portlanders lived in such walking neighbourhoods. (Of course, in Vancouver, B.C., the figure was 27 per cent, as of 2006!)

5. Energy. Which city is ahead in the clean-energy economy?

Portlanders drive less than Seattleites. They also ride transit more and bike much more. (Portlanders bike on about four per cent of all commutes --beating not only Seattle but even Vancouver, B.C. About 9,000 Portlanders bike into downtown Portland each day, three times as many as bike into downtown Vancouver or downtown Seattle.) But Seattleites appear to walk more. More importantly, Seattle has carbon-neutral electricity, thanks to its all-hydro municipal utility. Portland, on the other hand, gets some of its electricity from a coal-fired power plant in Boardman, Oregon, courtesy of Portland General Electric, majority owner of the plant. This plant is responsible for eight per cent of Oregon's total greenhouse-gas emissions.

So Portland is striding more decisively away from oil, while Seattle has already (mostly) weaned itself off coal. Which city wins the game?

Portland's estimated 2008 greenhouse gas emissions came to 11.9 metric tons of carbon dioxide-equivalent per person. Seattle's were 11.3 tons (and the real gap probably favors Seattle more strongly, because Seattle's inventory of emissions is more comprehensive than Portland's, as discussed below).

This outcome surprised me. I expected Portland to win silver. I was doubly surprised by how one-sided the contest was: four games to Seattle, one draw. How's that for inauguration-day gift for Seattle's new mayor?

In fairness, as I note below, some of the data is weak. Other indicators might have favored Portland.

Furthermore, the standings are not necessarily reflections of effort or intentions. Many other causes are in play. Seattle has carbon-neutral electricity, for example, mostly because the city utility locked up some of the best hydropower locations in the Northwest a century ago. It has a denser center city than Portland partly because it is the heart of a much larger metropolitan area. It's health and prosperity are reflections of the greater wealth and economic dynamism of the state and metropolis it centers.

Meanwhile, all of the cities' standings are reflections of scores of decisions, many of them made decades ago, often for unrelated reasons. Neighbourhood opposition to freeway building stopped Vancouver from following Seattle and Portland's leads and building downtown freeways. Now, the city benefits from a less car-dependent urban form.

Still, in the end, sustainable progress is measured in facts, not intentions. So whatever the reasons, the standings matter.

It probably also warrants saying that sustainability isn't a reality TV show or a celebrity cage fight (though the mayors of Portland and Vancouver have launched an official eco-rivalry).

No Northwest city is yet close to the destination of sustainability: carbon neutrality; widely shared prosperity; stable populations in strong communities; educational and economic opportunity for all; hyper-efficient use of natural resources; zero-pollution industries; and low-stuff, high-satisfaction lives.

To achieve these goals, Portland, Seattle, and Vancouver -- and all the other communities in Cascadia -- will best succeed if they not only compete for the lead but also cooperate, sharing lessons. In the race for sustainability, we all win only when we all finish.

Still, competition can motivate us onward. And the city of Seattle, it turns out, is currently leading the city of Portland. Who knew?

Notes about data and sources

I used a variety of sources to gather these data, and I also had to use different geographic areas as proxies for the cities. Consequently, you should take this post with a spoonful of salt. If Sightline were to complete a full study on this question, we'd find better data or rely on a consistent set of geographic definitions. But these data are good first approximations.

Life expectancy data are for King and Multnomah Counties, not Seattle and Portland proper. Both counties encompass suburban cities and towns in addition to their respective big cities. City-only life expectancy data are not readily available. The data come from datasets we collect from state and federal agencies in the vital statistics series. (See Cascadia Scorecard for details.)

Sprawl data are from the U.S. Census, as analyzed in the Cascadia Scorecard. Certain Portland-specific data were interpolated from findings originally made for Multnomah County overall. For example, I assumed that all of Multnomah County's "walking neighbourhoods" (where more than 40 people live on each acre) were inside the city of Portland.

Greenhouse gas emissions: Seattle from the city's new greenhouse gas inventory (see page 4). (You can find an interesting discussion of the inventory on former Sightliner Dan Bertolet's blog, starting here, then here and here, too.)

Portland's inventory (see page 12) covers all of Multnomah County and uses a different, less-comprehensive methodology than Seattle's. For example, Seattle includes its share of air travel from Sea-Tac Airport, while Portland does not include air travel. From my preliminary analysis, it appears that if Seattle had used the same methodology as Portland, its carbon footprint would have appeared to be at least 20 per cent smaller than reported.