"What really hurts in matters of this sort is not the fact that they occur, because overzealous people in campaigns do things that are wrong. What really hurts is if you try to cover it up." -- President Richard Nixon on Watergate, August 29, 1972 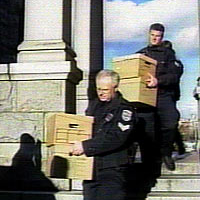 If you cannot figure anything else out about the complicated Basi-Virk corruption case, understand just this -- during the May provincial election someone in the B.C. government ordered potentially critical email evidence destroyed.

But we do know that it happened just before the May 12 election and that the RCMP is now investigating whether deleting backup tapes of the emails of Premier Gordon Campbell, cabinet ministers and staff might constitute obstruction of justice.

And we do know it happened despite Campbell saying on June 23: "The records that should be kept under the law have been kept."

On Monday, B.C. Supreme Court Justice Elizabeth Bennett ruled some emails were "likely relevant" evidence, allowing the defence to ask for a court order to determine if the tapes still exist and to obtain them.

Last week, a senior government manager's affidavit filed in court revealed that backup tapes of emails about the $1 billion sale of B.C. Rail in 2003 still existed in May 2009 -- despite earlier government claims they had been erased -- but were then ordered sent to government contractor for disposal.

We don't know -- yet -- exactly what is contained in the affidavit of Rosemarie Hayes, the government's director of Messaging and Collaboration Services, Workplace Technology Services who confirmed the order to destroy the emails was given.

But defence lawyers for David Basi and Bob Virk -- the two former ministerial aides charged with breach of trust and fraud, made clear that if evidence that might exonerate their clients was destroyed by the government there will be hell to pay.

It was New Democratic Party MLA Leonard Krog's letter to Robert Gillen, the Assistant Deputy Minister of the Attorney General's Criminal Justice Branch, asking him to appoint a Special Prosecutor to investigate "potential obstruction of justice" that has now been referred to the RCMP.

"This is a remarkable turn of events and the comparisons to Watergate are warranted," says Krog.

No kidding. From the eerie similarity of Rosemarie Hayes first name to that of Rose Mary Woods, Nixon's secretary who erased 18 minutes of secret White House tape recordings, to the fact that the provincial government's lawyer has now filed affidavits from Campbell's senior political staff, the whole situation has an All The President's Men feeling about it.

In the original Watergate investigation, it was revealed in July 1973 that Nixon had secretly installed a taping system to automatically record all conversations in the White House. Watergate Special Prosecutor Archibald Cox immediately demanded the tapes be turned over to him.

After Cox rejected a Nixon compromise on the tapes, the president ordered Attorney General Elliot Richardson to fire him. Richardson refused and resigned, as did Deputy Attorney General William Ruckleshaus, leaving Solicitor General Robert Bork to carry out Nixon's orders in what was termed the "Saturday Night Massacre."

Those actions spurred Congress to begin impeachment proceedings against Nixon and after it was revealed that there was a "smoking gun" tape indicating Nixon had participated in obstruction of justice in the Watergate investigation, he resigned the presidency on August 8, 1974.

Here in B.C. we don't have taped conversations but we do have private emails between many of the key players in the B.C. Rail privatization.

It may or may not turn out to be All The Premier's Men and Women, but the big question is how will this movie end?