The RCMP’s costs for policing a remote resource road on Wet’suwet’en territory have steadily dropped over the past three years, according to information obtained by The Tyee through freedom of information laws.

That may be about to change as officers respond to an alleged attack on a Coastal GasLink worksite last month that the company said caused millions of dollars in damage to equipment. The RCMP has said it is assigning 40 investigators to the case.

In an interview following the Feb. 17 incident, RCMP Chief Supt. Warren Brown told The Tyee that patrols had increased on the Morice West Forest Service Road as part of the police investigation.

“But certainly there’s no punitive reason for the police to come in right now and police any differently, other than the fact that we have a large contingent of officers to gather evidence and try and identify who did this,” Brown said.

Members of the Wet’suwet’en Nation and their supporters have periodically blocked access to Coastal GasLink workers, who are building a 670-kilometre gas pipeline through northern B.C.

But last month’s incident marked an escalation from previous anti-pipeline activity in the area. There have been no arrests, although the RCMP said it was narrowing down suspects.

Costs for policing the Morice in the months leading up to the incident ran about 20 per cent of what they had been in the early months of 2019, when enforcement first began on the territory.

But the RCMP only spent $2.3 million in the nine months from March 31 to the end of 2021. That’s despite continued patrols on the territory and a two-day enforcement effort that saw 30 people arrested in mid-November.

That’s a small amount compared to the $19 million in spending reported from January 2019 to March 31, 2021. The RCMP established its remote Community-Industry Safety Office on the Morice road following the first police action there on Jan. 7, 2019.

In the months that followed, up until the fiscal year end on March 31, 2019, policing expenses ran $1.2 million a month, to a total of more than $3.6 million, with the biggest line item being personnel costs.

Monthly costs dropped to just over $722,000 for the 12 months leading up to March 31, 2020 — a period that included a month-long standoff and five-day enforcement action on the Morice — and $483,000 a month for the fiscal year ending March 31, 2021, a period that saw a continued police presence despite little activity on the territory due to the pandemic.

Costs dropped again between April and December 2021, a reporting period that included the two-day enforcement in November, to an average monthly cost of just over $260,000.

The most significant decrease has been in personnel costs. While the first two years of the conflict saw those account for almost half of total expenses, in the latter part of last year they dropped to 25 per cent.

Resources spent on personnel between April and December last year amount to just 10 per cent of what the force paid for human resources early in 2019, indicating that the number of officers assigned to the Wet’suwet’en conflict may have diminished.

The RCMP declined to respond to a detailed list of questions from The Tyee, which asked about reasons for the decrease in personnel costs, whether the force was conducting fewer patrols along the Morice and whether it had shifted to using more local officers. Instead, it directed questions back to its Access to Information and Privacy branch, which provided the documents.

“We remain a presence in the Morice River Forest Service Road and are continuing our patrols in the corridor as we have been,” Cpl. Madonna Saunderson said in an email prior to last month’s incident, adding that she couldn’t provide an “actual number of resources for operational reasons.”

Coastal GasLink’s private security has also built a presence along the Morice, including monitoring access to the site of last week’s incident, a strategic worksite where the company plans to drill under the Morice River, a significant cultural feature known to the Wet’suwet’en as Wedzin Kwa.

While the RCMP has declined to say how many officers are stationed on the Morice, early in the dispute Wet’suwet’en Hereditary Chief Na’Moks said he’d been told the detachment had the equivalent of 16 full-time officers.

Na’Moks, whose English name is John Ridsdale, said that he continues to visit the territory on a regular basis and on Feb. 15 saw two RCMP vehicles on the remote resource road. While he said RCMP numbers appear to have fluctuated over the past three years, he doesn’t believe the police presence has dropped significantly.

“I’m only on that road for a couple hours and yet I can see the police presence,” he said.

In March 2020, as the provincial, federal and Wet’suwet’en governments were negotiating a memorandum of understanding to move forward with the nation’s land title negotiations, Hereditary Chiefs asked the RCMP to leave the area.

While the force said it would relocate to nearby Houston, patrols have continued and the remote detachment remains, with officers making it part of regular patrols, Na’Moks said.

When the pandemic began, Na’Moks said, the RCMP told Hereditary Chiefs that it would use officers from the local Houston detachment to reduce travel in and out of the area. It was unclear whether that meant adding more people to the local detachment, he added.

Some protesters have observed officers with the RCMP’s Community-Industry Response Group, a unit formed in 2017 to address industry related conflicts, move between Wet’suwet’en territory and old-growth logging protests at Fairy Creek on Vancouver Island. Increased police presence at Fairy Creek could have resulted in a diminished police presence in the North. 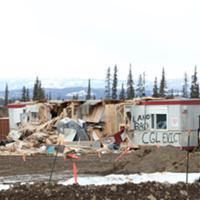 Rumours and Allegations, but No Arrests After Mystery Pipeline Attack

Brown said that policing resources have been stretched thin with vaccine mandate protests taking place across the country in recent weeks, but added that having Community-Industry Response Group officers return to Wet’suwet’en territory would be helpful.

“I hope they’ll come back, but with everything that’s happening with the freedom convoy, they’ve had to go to other areas,” he said.

RCMP officers can be paid up to $100,000 annually after three years of service, according to the force, and officers assigned to the Community-Industry Response Group can earn up to twice that with overtime.

Na’Moks questioned the accuracy of the RCMP’s report on its spending.

“I’m sure they don't want the public to know how much the public is paying to guard an industry, in particular CGL,” he said. “We never get a proper number on what they’re getting paid.”