"We may soon enter the place we see a decline,” Henry said in a briefing.

Case rates have stabilized in some parts of Canada, although that could be due to limited testing, she said.

But evidence from other viruses with similarly short incubation periods suggests this wave will be shorter than others, Henry said.

She pointed to promising signs of decline in new cases in South Africa and the United Kingdom, where more immunity from previous infection and greater booster shot access have helped blunt Omicron’s surge.

“There are many, many unknowns… we would expect this to be a shorter wave,” Henry added.

But on Monday the chief public health officer of Canada Dr. Theresa Tam warned “any dip in the national epidemic curve is most likely an artifact of underreporting and under-detection of cases.”

How hard and when this wave will hit B.C.’s beleaguered health-care system is not yet known as B.C. continues to record more than 2,000 new COVID-19 cases each day.

COVID hospitalizations, a lagging indicator of illness, have continued to increase to 431 in hospital with 95 of those in intensive care. The previous peak was 515 hospitalized patients in April.

There are currently 580 patients using a surge bed — added to increase hospital capacity — in B.C., 24.9 per cent of the 2,329 surge beds available. Sixteen of the province’s 218 surge critical care beds are in use.

“We still don’t know the full effect of Omicron on our hospital system and the level of care that will be required right now,” said Henry.

Health care capacity is also being further strained by workers falling ill, leading to reports of understaffed hospital units on Vancouver Island and elsewhere in the province.

Henry previously warned employers that as many as 30 per cent of staff could be out sick at any one time.

As B.C. considers plans that would turn the Vancouver Convention Centre from a vaccination clinic into a field hospital — “only if necessary,” according to Health Minister Adrian Dix — Henry said her primary focus is on “keeping as much as possible open.”

That includes schools, which she said are safe and essential for children right now.

Some experts have called on B.C. to do more to combat the spread of COVID-19 in schools and support remote learning options for students.

B.C. provides little data on school exposures and transmission, and announced last week schools would monitor attendance rates as a proxy for infection in classrooms. 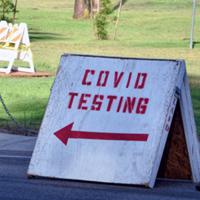 With Lack of COVID Testing, BC Is ‘Completely Flying Blind,’ Say Experts

Henry stressed the importance of everyone eligible getting vaccinated and boosted, noting that the “risk landscape” has changed significantly, particularly for those who are unvaccinated.

“This strain of the virus is absolutely mostly mild in people who have the protection that vaccination offers,” she said.

But for unvaccinated people, “your personal risk has gone up dramatically. And you are also at higher risk of having severe illness and ending up in hospital.”

Henry urged British Columbians to limit their contacts to the same small group of people, stay home if they feel ill and get their shots as soon as they are eligible.

“We will get through this storm and this surge with kindness and by being safe,” she said.