It has been nearly 15 years since Mo Korchinski was last incarcerated and started her recovery from substance use disorder thanks to a warden who found her a bed in a recovery program after her release.

It was the sense of dignity and accountability to someone else that helped her stay in recovery and start building a different life, Korchinksi says.

But now as executive director of Unlocking the Gates Services Society, which supports people who are released from prison to find housing, health care and community, Korchinski feels like resources for clients are disappearing before her eyes.

“There are less now than when we started,” Korchinski said in an interview. The demand for her organization’s support services has grown by 50 per cent over the past year, from 800 clients in 2020 to more than 1,200 clients in 2021 so far.

And as 2021 hurtles towards being B.C.’s most fatal year recorded for toxic drug deaths, helping people released from incarceration to access health care and harm reduction is more important than ever, according to a new study by researchers at the BC Centre for Disease Control.

The study found that the leading cause of death within 30 days of release was toxic drug overdoses.

But formerly incarcerated people who accessed a family physician in the community within 30 days of release were 42 per cent less likely to experience a fatal overdose, it found.

Non-fatal overdoses are a key predictor for a fatal one later on, and also carry high risks of brain injuries and permanent health issues.

“Unmet health-care needs can affect mental health and substance use,” said McLeod, who completed her PhD at the UBC School of Population and Public Health earlier this fall.

“So that first visit is a really important opportunity to provide trauma-informed care, and for family physicians to be well-resourced with referrals.”

The period after release from prison is well-documented to carry heightened risk for overdosing for a number of reasons.

People’s tolerances for substances are reduced after not having access to them in prison, and their knowledge of the toxic drug supply and how it has changed is often not up to date.

Incarceration also disrupts every aspect of a person’s life, making it difficult to manage renewing prescriptions or seeking care for chronic pain or mental illnesses, so many people turn to criminalized substances to manage.

People who are more comfortable or able to access health care in general may be more likely to seek out other supports such as harm reduction support, McLeod said.

The study analyzed data from a sample of 20 per cent of B.C.’s population, including 6,721 incarcerated people, from January 2015 to December 2018 to observe the impact of transferring responsibility for health care in provincial prisons from the Ministry of Public Safety and Solicitor General to the Provincial Health Services Authority in 2017.

More incarcerated people were connected with prescribed opioid substitutes and other harm reduction and substance use treatment options after the PHSA took over, and very few of those people experienced an overdose within a month of release.

But just one-third of people accessed community health care within 30 days of being released, the study found, meaning a majority still don’t have access to adequate care or avoid seeking it due to stigma against people who have been incarcerated.

Indigenous people, who are incarcerated disproportionately more than non-Indigenous people due to the ongoing effects of colonization, as well as women experience specific barriers of racism and sexism when seeking health care.

While not all incarcerated people use substances, and not all substance users experience incarceration, the criminalization of substances and survival crimes to fund their use creates a deadly “revolving door” between the prison system and community living for those who do use substances.

Most people are released after less than two months in custody but many are trapped in a cycle of re-incarceration, McLeod noted, and they are still deeply connected to their communities.

“Responsibility for the supports they need and strengthening those connections is a whole government or a whole society responsibility,” McLeod said.

These days, Korchinski and her colleague Pam Young work around the clock to pick people up from every provincially run prison in B.C. and help them find a place to stay, or a place to start recovery if they want. 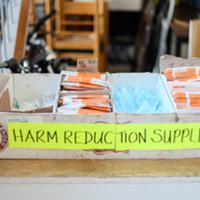 If someone has detoxed in prison and wants to start recovery, “it’s such a small window of opportunity to get them into treatment and recovery before they change their mind,” said Young, who had 25 years of lived experience with substance use and incarceration before she started recovery in 2009.

Often a bed doesn’t open up before the individual relapses or changes their mind, she said.

Young, who lost her son Glenn Jr. to toxic drugs in June 2020 among hundreds of other friends and colleagues over the years, said she wants to see more preventative actions taken to connect people with prescription treatments, safe supply or harm reduction before they are released.

Prison isn’t the answer, Korchinski said, but more needs to be done to make it less punitive and focus it on healing trauma and restoring dignity to those individuals.

“That’s what we try to do, pick people up and be that hope and believe in them,” she said. “No matter how many times they call us.”