One morning in the early 1990s, Ken Lyotier was cycling around Vancouver’s seawall in Stanley Park. He was no longer homeless or using drugs or alcohol, but he still stopped frequently to look through garbage bins for cans and bottles that he could redeem to make some extra money.

Lyotier started thinking about his mom, who had died in 1984 when he was still in the grip of addiction, and his childhood memories of visiting Stanley Park with his parents.

“I had this weird kind of sense, almost like she was calling to me from the Earth, to do this thing — like to get on with it, and do something,” Lyotier recalled during an interview for the CBC radio program Ideas.

“And I think it was kind of that social conscience thing, you know, like do something more. It’s more than just dumpster diving.”

Lyotier died this weekend at the age of 74. He’s being remembered as a tireless innovator who made things better for people who live in poverty, advocating for fellow “binners” who earn money collecting and returning recyclables.

As part of his advocacy, Lyotier pushed to change B.C.’s recycling rules to expand the type of bottles and cans that binners could redeem for a refund.

He also created a centralized hub for bottle and can returns called United We Can located in the heart of Vancouver’s Downtown Eastside neighbourhood.

His ideas led to the creation of the Binners’ Project, an organization that supports people who collect bottles and cans and has advocated for disposable coffee cups to be included in the list of items that can be redeemed.

Lyotier was always open about his own struggles: he started having health issues in his late teens and was later diagnosed with Crohn’s disease. Frequent hospitalizations and the constant pain he experienced made it impossible to finish university or hold a job, and he turned to alcohol and drugs to distract himself from his illness.

“When I was 22, I really had had enough. I thought, I just can’t go on with this. Nothing is working — and I attempted suicide,” he said in the CBC interview. “I couldn’t see any hope for a future. The pain was just too grim.”

During the ‘70s and ‘80s, Lyotier was either homeless or living in single-room occupancy hotels in the Downtown Eastside. In the mid-‘80s, he had an operation to remove part of his intestine that improved his pain and discomfort.

Speaking to The Tyee in 2015, Lyotier said that after the surgery in 1986, his doctors refused to release him from hospital to an unsanitary SRO hotel with a shared bathroom. He managed to get a place at the newly opened Four Sisters Housing Co-op in Gastown, and with secure housing and his pain under control, he was able to get sober.

Lyotier knew about the barriers that binners faced: stores wouldn’t accept large volumes of collected items; sometimes they rejected bottles that weren’t clean enough; and wine, spirits and some juice bottles weren’t included in the refund program. And they were treated poorly by everyone, he said.

In the early 1990s, Lyotier organized a demonstration bottle depot in Victory Square park in downtown Vancouver. Shortly after that event, the provincial government announced that B.C. would expand the deposit refund system to cover more containers.

“He could see the need for it, and if it wasn’t for Ken, I don’t know if we’d even have that depot down here,” said Michael Leland, a member of the Binner’s Project. “He was the absolute first.”

Leland said the depot made it possible for binners to redeem large volumes of bottles and cans — something that was impossible when individual stores were the only places to take empties.

John Lyotier, Ken’s brother, said he lost touch with Ken during the years he was struggling with addiction, but they were able reconnect in 2009. John, Ken and a third brother, Keith, grew up in North Vancouver, raised by working-class parents who were keenly interested in social justice issues and often talked about politics at the dinner table.

In the years since he re-established contact with his brother, John said he learned a lot from Ken’s boundless compassion and his “huge ability” to accept people as they were.

“For so many people like myself who have not had the unhappiness and the struggle of low value perception, or perceived low value, the feelings of worthlessness — we just don’t have the experience to be able to relate so closely,” John said.

“And then when we do, we have to realize just how darn fortunate we’ve been.”

Gabby Korcheva first met Lyotier in 2014, when she was a 21-year-old event assistant at the UBC Learning Exchange. He offered her a job at the Binner’s Project, which she quickly accepted. Lyotier was always full of new ideas and was able to get others excited about them too.

“We had to fundraise, and he taught me so much about getting support,” she said. “He taught us how to get people excited in the idea.”

When it comes to Lyotier’s legacy, Korcheva said the policy changes that Lyotier pushed are important, but his advocacy for his fellow binners was even more important. 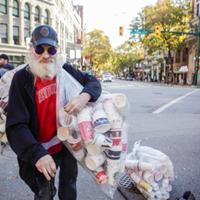 “I think they looked to him and thought if he can do it, I can do it,” Korcheva said. “Binners are truly one of the most marginalized groups of people in our city, and he spoke up for them.”

After being diagnosed with an aggressive form of cancer, Lyotier chose medical assistance in dying, a choice that allowed him to have control over his final days. That was important to him, his brother John said, after years of living with an unpredictable chronic illness that often robbed him of his dignity.

“Through my tears I was still smiling, and Ken was laughing,” John said, recalling their final conversation.

Lyotier always insisted on being paid no more than $20 an hour at United We Can, but in the months before he died, he had carefully made arrangements to start a charitable foundation with his life savings of $170,000.

The Ken Lyotier Fund will be administered through the Vancity Community Foundation. John now hopes others will contribute to the foundation to continue his brother’s work.