The B.C. government says a new climate plan will let it meet the legislated target for greenhouse gas emission reductions by 2030. But critics say it won’t work because the plan allows the oil and gas sector to continue to grow.

“I've had the honour of being premier for four summers now, and three of those four summers were the worst fire seasons in B.C. history,” he said. “Add onto that the devastation of the heat dome this past summer and I think all British Columbians... are focused on making progress on climate change not sometime in the future, but right now.”

The Roadmap to 2030 builds on 2018’s CleanBC plan that identified about three-quarters of the greenhouse gas emission reductions needed to meet the province’s legislated goal of a 40-per-cent drop below 2007 levels by 2030.

B.C.’s climate change accountability law requires deeper cuts by 2040 and 2050. The government missed a previous goal of a 33-per-cent reduction by 2020, with emissions instead remaining more or less unchanged from 2007 levels.

“One of the important features of our Roadmap to 2030 is our reporting every year on how we're doing, as well as new measures we plan to take,” said George Heyman, the minister responsible for environment and climate change strategy. “We plan to evaluate what we're doing and ensure that we're current with the latest technologies, the latest sources of energy, and that we're moving accordingly.”

“Between now and 2030, B.C. will see a marked increase in fracking as a result of the NDP’s $6-billion giveaway to LNG Canada,” Furstenau said in a statement. “The government’s support for this industry places a greater burden on the rest of our economy to make up the emissions gap.”

The LNG Canada project in Kitimat will use fracked gas from B.C.’s northeast to provide for exports to Asian markets.

Furstenau said that in the first year after the government began implementing the 2018 CleanBC plan emissions continued to rise.

“We need leadership that responds to the climate emergency with immediate action, instead of kicking the can down the road past the next election.”

The Wilderness Committee environmental advocacy group pointed out that the modelling in the government plan includes only the first phase of the LNG Canada project, but not that project’s planned second phase.

Nor does it include emissions from the proposed Woodfibre LNG facility or three other plants that are beginning the environmental assessment process.

Peter McCartney, the Wilderness Committee’s climate campaigner, said the omissions are important.“What happens if and when Shell wants to finish the $40 billion LNG plant it’s building in Kitimat? How does this plan prevent them from doing that.... And if they don’t plan to allow any more LNG facilities — why not just say so?”

In a statement later in the day she said timely action on the plan is key.

“The roadmap... commits to capping oil and gas emissions and reducing these emissions over time,” she said. “Details regarding how this will be achieved over the next six months will be critical as the sector is responsible for one-fifth of all emissions in the province.”

Karen Tam Wu, a regional director for the Pembina Institute and a member of B.C.’s Climate Solutions Council, said the plan is a move in the right direction and her organization welcomed several of the measures.

“However, a lack of willingness to take a firm stance on the future role of gas will threaten to throw B.C. off course,” she said.

“Most concerning is the plan allows for continued natural gas development in B.C., which is out of line with recommendations from leading international scientific climate and energy bodies,” she said, noting experts say no new oil and gas fields should be developed after this year.

Andrew Gage, a staff lawyer with West Coast Environmental Law, said that while there are positive elements to the plan, it fails to recognize the urgency of climate change.

“Eighty percent of climate change is caused by fossil fuel pollution, but B.C. has once again pushed off any plan to decrease emissions from the province’s oil and gas industry to 2023,” he said. “B.C. has failed to come up with a plan to achieve its 2025 target to reduce greenhouse gas emissions by 16 per cent, and its plan for the 2030 target has huge holes in it.”

Responding to questions from reporters, Heyman said the plan includes a reduction in emissions from the oil and gas sector of between 33 and 38 per cent. 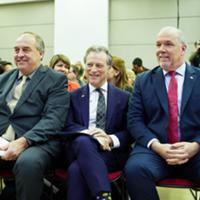 Heyman said that the most recent figures showing greenhouse gas emissions remained steady in the year following CleanBC’s introduction were to be expected.

“We spent a couple of years implementing, beginning to implement, the policies that are going to ultimately reduce emissions,” he said. “We always knew they wouldn't go down in year one.”

One factor that pushed emissions up was a change in how the federal government accounts for emissions from waste and land use, he said. “That made us have to work harder to develop a credible roadmap to 2030.”

The government expects emissions to plateau for another year and then begin to drop, Heyman said.