Limited and inconsistent testing and the lack of paid sick leave helped fuel COVID-19 outbreaks in B.C. long-term care and assisted living facilities during the first and second pandemic waves, a report from the Office of the Seniors Advocate has found.

As overtime pay nearly tripled in facilities with outbreaks, 40 per cent of workers reported going to work while sick out of a sense of obligation to co-workers and residents, pressure from management, and financial necessity because they would not be paid for time off.

Advocate Isobel Mackenzie called today for the province to boost rapid testing of staff and residents, and to mandate 18 paid sick days for all workers in the sector.

“The reliance on staff to remain home when unwell was challenging,” said Mackenzie, noting that about 40 per cent of staff, mostly casual workers, don’t have paid sick days. “We could be rapid testing staff and residents daily.”

Only 60 per cent of the approximately 40,000 workers in the sector have paid sick leave, with staff at for-profit and non-profit sites rarely getting the full 18 days afforded to regular staff at facilities run by the health authorities.

More than half of sites in B.C. offer six sick days or fewer.

Those sites were more likely to experience a larger outbreak, the report said.

“In all these cases, if a staff member did not have access to paid sick days, they would be without pay for the days they were absent, and this was one of many pressures that some staff felt in terms of the need to report to work,” read the report.

Outbreaks and the resulting limits to visitors put residents at risk of infection and death, and damaged their physical and emotional health, as Mackenzie reported last November.

During the pandemic, “it is seniors, particularly those who live in long-term care and assisted living, who have felt the deepest personal impacts,” said Mackenzie.

More than 800 residents of long-term care and assisted living have died in the province’s four pandemic waves.

The limits meant suffering for loved ones and residents. “A lot of them would have died alone and that has, I’m sure, been devastating to the families,” said Harper.

Through a sweeping analysis of 365 outbreaks at 210 facilities in B.C. between March 2020 and February 2021, Mackenzie’s office found limited testing directives also led to larger and more fatal outbreaks.

Instances of enhanced surveillance — a step short of declaring an outbreak when a single case was detected that did not require testing — were included in the analysis as well.

Staff introduced the virus 76 per cent of the time, and just one visitor was recorded as being an initial case.

“These are asymptomatic staff unaware they are infected and transmitting it to residents,” said Mackenzie.

In 91 per cent of outbreaks that were contained to one case, staff and residents were tested within 24 hours of the first case being identified, compared to just 79 per cent of large outbreaks of more than 26 cases.

And among outbreaks where testing wasn’t ordered within four days of identifying an initial case, 40 per cent became larger outbreaks.

“Those sites that received no direction to test were more likely to develop into larger outbreaks,” said Mackenzie, noting that directives are up to medical officers of health and varied by health authority.

In May, the South China Morning Post reported that 192 residents had died in homes where outbreak declarations were delayed in favour of enhanced surveillance, including Little Mountain Place in Vancouver, where 41 people died.

It also mattered who was the first identified case, the report found. If it was a resident, a large outbreak was four times as likely to develop, and five times more likely if the case was a night shift worker who is in contact with more patients than day workers.

“It is more likely to see the outbreak spread, because it’s already in multiple areas of the facility,” said Mackenzie.

Facilities who contracted care services, had a previous outstanding inspection issue or had an influenza or norovirus outbreak within the last three years were all more likely to have had more and larger outbreaks during the pandemic’s first two waves.

The same was true for facilities with low levels of registered nurse care hours, Mackenzie added. “When there’s a crisis, that is when you see the value in that additional level of training, of expertise, of assessment that a registered nurse can bring to the site.”

Mackenzie wants to see 18 days paid sick leave mandated for all workers, a position the union representing 20,000 workers in the sector supports.

“Let’s help them stay safe by restoring a level playing field for working and caring conditions across seniors’ care, including 18 paid sick days a year,” said a statement today from the Hospital Employees’ Union.

Mackenzie also calls on the province to boost regular rapid testing to catch cases that may be asymptomatic or present atypically, increase staffing levels and nursing staff levels, decrease contracting for direct care staff and eliminate the small number of shared rooms that also facilitated the virus’ spread.

Mackenzie also supports the province’s decision to mandate vaccines for all staff and visitors in long-term care. 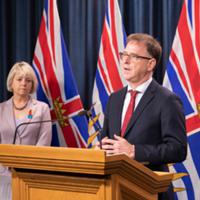 “I really hope that the government will take the report seriously this time,” said Harper, who has been an outspoken advocate for residents and loved ones throughout the pandemic.

She wants to see nursing hours increased and better enforcement from the province to ensure their orders are applied consistently.

Despite direction from the province that masking is not required in private rooms, Harper’s mom’s facility has mandated visitors wear masks at all times.

After many months apart and a while face-to-face, Harper returning to wearing a mask has been confusing for Bell, who has dementia.

“It’s unfortunate that there are still so many inconsistencies in terms of what rules are applied,” said Harper.