Myrtle lives right across from Oppenheimer Park in the Downtown Eastside. When the weather gets hot, her room becomes unbearable, so on Saturday she was standing outside on the sidewalk while cars and trucks passed by on busy Cordova Street.

This weekend, a punishing heatwave settled over Western Canada, pushing temperatures to historic highs. On Saturday, it was 32 C in the shade in the Downtown Eastside, a part of the city that gets hotter than other neighbourhoods because there aren’t as many trees to provide shade.

It’s also the city’s poorest neighbourhood, where many residents are either homeless or living in poor housing. Downtown Eastside residents often have chronic health conditions, a disability or use substances.

The park board announced Monday it would finally open the west side of the park, after neighbourhood advocates took to social media to call on the park to open the greenspace. The block-long patch of trees and grass has been locked away behind a tall blue fence for over a year, since a large tent city that had been at the park for two years was removed in May 2020.

“Look at all that shade!” Myrtle exclaimed, looking across the street at the park. She said she would normally go sit in the park in hot weather on a bench. On the sidewalk outside her building, there is nowhere for her to sit.

When the tent city was located at the park, from 2018 to 2020, she stopped going there because she was afraid of the frequent violence that was happening, which included a murder, assaults and sexual assaults.

Park board manager Donnie Rosa previously told The Tyee that after the tent city was removed through a provincial public safety order last year, it took a long time to repair damage to the soil and grass. The field house, which houses the park’s washrooms, was vandalized a few months later and will need extensive repairs.

Since April, park board staff have been working with community groups like the Carnegie Community Centre Association, the Downtown Eastside Women’s Centre and Aboriginal Front Door to put a plan in place to open the park so everyone can safely use it. The parks board planned to open the west side of the park by June 29, Rosa said, but decided to open it one day earlier than planned because of the heat wave.

Advocates questioned that decision, saying keeping the park remained closed all weekend could have had dire health consequences.

Karen Ward, a Downtown Eastside resident and neighbourhood advocate, took to social media on Friday to call out the parks board and the city for keeping the park closed.

“This is an acute health issue,” she told the park board, asking other social media users to amplify her call to open the park.

Sarah Blyth, the executive director of the Overdose Prevention Society, said keeping the park closed could have serious health consequences.

“Closing a park, having people lying around on the cement as an alternative could be lethal,” she told The Tyee.

“We’ve got to think about these situations where we may not understand those consequences but it’s absolutely something that could happen.”

Rosa said that as much as she would have liked to open the park earlier, park board staff were committed to working with community partners to make sure that when the park did open, it would have the services and programming in place to make it safe and welcoming for everyone.

Blyth said she and other Overdose Prevention Society staff and volunteers had handed out 6,000 bottles of water over the weekend and plan to hand out 3,000 more on Monday, so she has hired more people from the community to distribute water today. When OPS staffers go out with carts full of water bottles, “people come running,” Blyth said. “They are desperate for water.” Blyth said an emergency hub in a building operated by Atira Women’s Resources Society that has been open since the beginning of the COVID-19 pandemic has been key to being able to stockpile enough water and other supplies for the heat emergency. 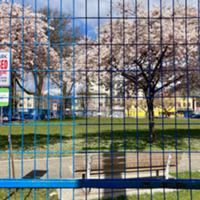 After a Year Behind Barriers, Downtown Eastside to Get Its Park Back

Blyth said Oppenheimer Park needs to be open to help get people off the sweltering concrete.

That’s not just for the safety of homeless people, but also folks living in old buildings and single-room occupancy hotels in the neighbourhood. SROs are old buildings that tend not to be well-insulated, meaning they’re cold in the winter and get very hot in summer. “They’re unbearable to be in,” Blyth said. “They take the heat in like cookers.”

In a press release, the park board said that while the field house is closed for repair, staff will install a washroom trailer and a site office to provide space for Carnegie Community Centre staff.

Carnegie’s Oppenheimer Park team will be organizing programming in the park, including arts and crafts, music, drinks and checking in with park users, according to the park board.