Here are two key words that have been largely left out of the broiling debate around British Columbia’s old-growth forests: carbon emissions.

Even in the recent forest policy update, the provincial government only mentioned carbon emissions twice. And that was to say forests suck up and store carbon, which environmental advocates warn doesn’t tell the whole story.

By B.C.’s own reporting, forests are the largest emitters of greenhouse gases in the province — 23 per cent larger than the total emissions from the energy sector.

When B.C. reports its official carbon emissions, that number excludes emissions from forests. Coste says that’s a huge problem, because “emissions associated with forests in some years surpass B.C.’s total emissions. Which is staggering. It’s like a second B.C. we don’t count.”

Coste says the province has a long history of siloing two ministries — the Ministry of Environment and Climate Change Strategy and the Ministry of Forests, Lands, Natural Resource Operations and Rural Development — and acting like they never overlap.

But with the climate emergency it’s urgent the two departments work together to tackle emissions from forests, Coste says.

B.C. counts and reports its annual greenhouse gas emissions in a methodology book.

If B.C. included emissions counted under forest management in its official inventory total, the province’s annual CO2 emissions would jump to 305.3 megatonnes in 2018, instead of 67.9 megatonnes.

Jens Wieting, Sierra Club BC senior forest and climate campaigner, has heard that response before. He’s called on B.C. to include forest emissions in its total count for a decade. He says the province keeps climate and forests separate so B.C. can maintain its narrative that logging is climate friendly.

Carbon sources are often calculated to either be net emitters, meaning they add carbon to the atmosphere, or net sinks, meaning they suck up and store more carbon than they give off.

Let that sink in for a second — our forests pollute more than they suck up pollution.

Trees do pull carbon dioxide from the atmosphere that’s then locked inside them. But that’s only as long as they’re alive. Wildfires, waste burning and discarded materials left to decompose all release that stored carbon.

“Since 2002, forests have been net sources of carbon because the emissions from wildfires, slash burning and logging are greater than the sequestration from growth,” Coste says.

He adds that while wildfires make up the largest chunk of the emissions, slash burning and logging are “not insignificant.”

The province’s emissions inventory maps the steady increase of emissions from wildfires over the past three decades.

In the 1990s, wildfires spat out a couple of hundred to a couple of thousand annual kilotonnes of emissions. By 2017 to 2018, that had jumped to around 200 megatonnes.

But wildfires aren’t the only thing dramatically increasing forest emissions.

Another provincial inventory category outside the official total is “forest growth minus decay,” which tells its own story.

When a tree grows, it sucks CO2 from the air, exhales the oxygen and uses the carbon as a building block in its trunk, roots, branches and leaves. The forest keeps the ground cool so even when trees die, the rotting process, which releases CO2 back into the environment, is slowed down by up to hundreds, if not thousands of years, according to a 2019 report by forest ecologist Jim Pojar.

An undisturbed forest will keep sucking up and storing carbon for several centuries or even millennia, Pojar notes.

B.C.’s forests used to be powerful carbon sinks. In 1990, B.C.’s forest growth minus decay was calculated to absorb an annual 90 megatonnes of CO2. For comparison, Metro Vancouver produced 14.7 megatonnes of CO2 in 2019 with its population of just under three million people.

But starting in 1997 that number began steadily decreasing, to just over seven megatonnes in 2018.

In an emailed statement, the ministry said, “This lower sequestration is largely due to mountain pine beetle and global climate change rather than B.C. action.”

That shift isn’t part of the province’s official emissions total because it’s outside of human control, according to the Ministry of Environment.

“Emissions estimates from forest management involve a high degree of uncertainty relative to other sectors due to a number of factors,” the statement said. “This includes the difficulty in accounting for complex ecological process such as carbon uptake by vegetation and carbon release through decomposition — both through natural processes in the forest and as harvested wood products.”

Ecologist Pojar calculates that when a forest is clear cut, up to 60 per cent of the stored carbon is immediately thrown back into the atmosphere.

This is partly from slash pile burning. During a clearcut, everything in a set area will be cut down. Valuable logs are trucked away, still storing carbon. The rest of the fibre — small trees, the tops of trees, bushes, branches and roots — are burned in piles. This is the cheapest and easiest way for a logging company to clear the land so it can be replanted, Coste says.

The provincial inventory says emissions from slash burning peaked in 1995 at 8.9 megatonnes of CO2 and steadily decreased ever since, to 3.3 megatonnes in 2018.

Coste says the province could immediately reduce emissions from slash burning by applying the carbon tax to burns. The B.C. carbon tax applies to all fuels sold in the province, and to all peat, tires and asphalt shingles when burned.

Forest companies currently get a “massive free ride” by avoiding the carbon tax, he says.

In the recent forest management policy update, the province says it plans to decrease slash pile burning by encouraging local companies to use the leftover fibre.

The Sierra Club’s Wieting says a carbon tax would encourage less destructive logging practices, because companies could choose to leave trees with low economic value standing instead of cutting them down and burning them.

In his 2019 report, Pojar recommends turning slash piles into biochar to fertilize the logged site, or to leave the piles to slowly decompose.

The Tyee asked the Ministry of Environment if it was considering applying the carbon tax to slash burns. In an emailed statement, the ministry says it already has policies in place to reduce emissions.

When asked why counting emissions from forests is important, Coste and Wieting point to the UN Intergovernmental Panel on Climate Change, which says humans have nine years to keep the planet from warming more than 1.5 C to avoid the worst impacts of global warming.

That means B.C. needs to do everything it can to cut carbon emissions, even in areas where it chooses not to count the numbers in its official totals. 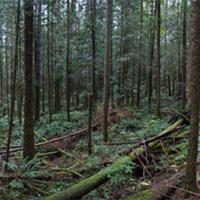 ‘Net-Zero’ Emissions May Not Be as Green as You Think

B.C. needs to stop feeding into that loop and start thinking of forests as a shield against climate change, Coste says.

Wieting says to do this, B.C. needs to immediately change when and where harvesting happens. “Protecting old growth and allowing second-growth forests to grow old again would allow some of the forests to sequester a lot more carbon in the short term. We’re talking 50-to-100-year-old forests, that’s the age class when things are just getting exciting in the annual uptake of carbon,” he says.

In his report, Pojar echoes a similar warning that B.C.’s forests are worth more standing.

“Keeping forests buys us time to develop alternative energy strategies to reduce CO2 emissions, to change our behaviour, and also to establish a lower greenhouse gas base level, thus reducing the ultimate impact from warming on the forests themselves,” he says.